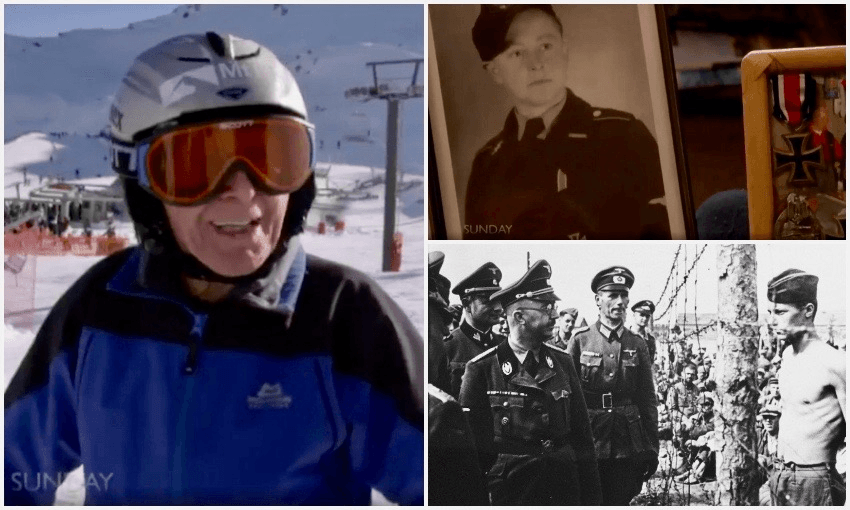 Willi Huber on Mt Hutt in the 2017 Sunday programme; a photo of Huber as a Nazi soldier and his medals, also from Sunday; and Heimrich Himmler, head of the Waffen-SS, inspecting a prisoner-of-war camp in Russia in 1940/41 (WWII photo: Getty Images)

Why is New Zealand intent on honouring the legacy of an unrepentant Nazi?

Willi Huber on Mt Hutt in the 2017 Sunday programme; a photo of Huber as a Nazi soldier and his medals, also from Sunday; and Heimrich Himmler, head of the Waffen-SS, inspecting a prisoner-of-war camp in Russia in 1940/41 (WWII photo: Getty Images)

Last week, 97-year-old Cantabrian Willi Huber, a decorated Nazi officer lauded for his role in the establishment of Mt Hutt ski field, died. Juliet Moses says it is an indictment on this country that there has been no real reckoning with his past.

Cantabrian Willi Huber died last week. If you’re not a skier, you may not have heard of him. I’m not, but his name was seared in my mind when I first heard it in 2017.

That’s when TVNZ featured him in its Sunday programme, lavishing praise on him as a Mt Hutt ski “pioneer” and “father of the mountain”. This did not pique my interest so much as the fact that he was also, in Cameron Bennett’s words, a “remarkable survivor” of World War II. Was he a Kiwi fighter pilot who fought for the RAF in the Battle of Britain? Or perhaps a survivor of a concentration camp? Why, no! He was a decorated Nazi officer – an Austrian who volunteered for the Waffen-SS on the Eastern Front, moving here in the 1950s.

The SS was the Nazi regime’s paramilitary branch, responsible for policing its racial policy and running its concentration camps. The Waffen-SS was its combat unit. Under the auspices of Heinrich Himmler, it ran separately from the German army.

The TVNZ segment isn’t the only fawning media coverage Huber enjoyed. In 2013, a puff piece in the Press (part of the Stuff stable) with no mention of his wartime activities; in 2014, another Press feature, in a series on “Heartland’s Heroes”, recounting both his achievements and hardships during the war. Conspicuously absent from the entire article was any mention of the SS or Nazis. Instead, it wrongly referred to his time in the “Germany Army”. Another Stuff piece in 2017 was similarly wrong, with very brief mention of his war travails.

Following his death, there has been more coverage, although this time referring to his Nazi past, and the controversial TVNZ piece. In Stuff, Mt Hutt Ski Area manager James McKenzie said the ski run named after Huber would continue with his name:

“He made a new life and a new start here and tried to put that behind him,’’ he said. “We are happy to respect his legacy. The context of what he went through in the war, nobody knows for sure what people did way back then.”

Should he have been able to make a new life in Aotearoa? Should his “legacy” be honoured?

Sure, as his defenders have noted, he was only 17 when he volunteered and he did serve 16 months in military prison after the war. And it’s true, we don’t know what he personally did. But during the Nuremberg Trials the International Military Tribunal saw fit to declare the entire Waffen-SS as a criminal organisation.

Even so, I do believe in the possibility of redemption – even grudgingly, I suppose, for those who volunteered as Nazis. But redemption only belongs to those who show remorse and rehabilitation, and Huber showed none of that.

He never publicly disavowed Nazi ideology. He never as far as I know (and I think I would know) sought out the Jewish community to make amends, or visited Wellington’s Holocaust Centre, or toured schools speaking of the hatred and destruction he saw during the war, as Holocaust survivors (who have nothing to atone for) I know tirelessly do.

Instead, on TVNZ, he said, chuckling: “I give it to Hitler, he was very clever. He brought Austria out of the dump.” When Bennett gingerly pointed out that “the SS was responsible for horrendous war crimes”, Huber said he did not know about the camps until the “bitter end”. “And when you learnt about this, were you horrified?” asked Bennett leadingly. “What could we do?” replied Huber. “We all agreed it was wrong.”

Hardly a man taking responsibility for his actions, wracked with remorse and unequivocally rejecting Nazism. In fact, the glowing interviews, showing him proudly displaying his war medals and gleefully recounting his wartime adventures in the “German army”, depict a man who, rather than reconciling with and repenting for his past, revelled in it.

As a historian, I can state unequivocally that serving in a Waffen-SS unit on the Eastern Front, there is no way that Mr Huber could possibly not have been aware of the massive atrocities carried out by the SS and the Wehrmacht in the territories of the Soviet Union, where 1,500,000 “enemies of the Reich”, primarily Jews, were murdered individually during the years 1941-1943.

But what troubles me more than an unrepentant Nazi dwelling in Aotearoa is the adulatory treatment he received, which either ignored, trivialised or glorified his past. Where were the probing questions about his activities, his embrace of Nazi ideology, his amends, how he got to New Zealand on a work visa? (According to Dr Zuroff, New Zealand was the only Anglo-Saxon democracy that chose not to take legal action against any alleged Nazi war criminals; up to 46 are believed to have fled here after the war. )

Something is amiss when an actual Nazi living in Aotearoa is kid-gloved and celebrated, while a photo on social media of a political candidate impersonating Hitler at the age of 14 causes an uproar. It is an indictment on this country that there was no real reckoning with Huber’s past, but more than a touch of historical revisionism.

In recent years, and more so since George Floyd’s death, history and historiography have been re-evaluated. Difficult philosophical questions are being grappled with, such as how to recognise people who may have done some great things but also did some things or held some attitudes that the contemporary consensus holds as unacceptable. Martin Luther King Jnr reportedly had some attitudes to sex and women that most people today would consider, shall we say, unpalatable. Gandhi was apparently racist, at least earlier in life. They were flawed human beings, as we all are, but few would doubt their qualities as leaders and their huge, world-advancing contributions.

But Willi Huber was no Gandhi or MLK. Doing something you love and helping to create a ski field is not quite on a par with liberating a nation from colonialism or leading a civil rights movement and helping to end racial segregation. Nor is it, in my opinion, sufficient to cancel out his years spent volunteering for the Waffen-SS, an integral part of the Nazis’ brutal killing machine.

Juliet Moses is spokesperson for the NZ Jewish Council