I wasn’t sure what to think when two episodes of the new local podcast He’ll Be Right landed in my inbox. My daughter sent them to me and asked me to listen and share my views.

I’ve been called a “woke grandpa”, and I’m confused about that too. Is it a compliment? Or an insult? It came, in jest, from a younger colleague I’d previously worked with after expressing my thoughts on masculinity and my own journey thinking about what it means to be a “real man”.

So, before I listened to the first two episodes, I googled the hosts and was pleased to find one of them openly admitting to often being as confused as I sometimes feel.

My grandchildren are the guiding force on my own journey and I’m interested in how other men of my vintage are facing new ideas from the young people in their lives.

It’s for that reason I was looking forward to listening to the podcast which is a collaboration between Stuff and NZ On Air. It features six episodes – two of which have been released with the remaining episodes dropping two at a time each weekend throughout the rest of January.

The co-hosts are ex-rugby professional (and the confused guy) John Daniell, who is 51, and journalist Glenn McConnell. The google search reminded me that Daniell wrote an entertaining book called Inside French Rugby: Confessions of a Kiwi Mercenary back in 2007.  More than just a handy rugby player, he represented England Schoolboys in 1990 before coming home and winning New Zealand Under 19 and national Colts honours.

All Blacks status eluded him but Daniell was good enough to play NPC for the Wellington Lions for three years before riding the professional wave of the mid-90s by playing in France for Dan Carter’s old Paris-based club Racing as well as Perpignan and Montpellier. Daniell then appears to have morphed into a freelance journo with a keen sense of justice as well as an edgy articulation around masculinity. Not surprisingly, given Daniell’s background and rugby’s profound and historically out-sized influence on how New Zealanders (particularly men) view our nation and ourselves, the national game features prominently in the opening episode titled “The All Black and the Model”.

Daniell chats with current All Black prop Karl Tu’inukuafe about the incongruity of a career where using your body as a weapon is explicitly demanded. Daniell is over 200cm tall and weighs 121 kgs. Tu’inukuafe is 131 kgs of immense, seemingly unstoppable, human flesh.  Yet both confirmed something I had long observed in many sensitive out-sized human beings – they are acutely aware of their physical presence and often try to shrink in presence off-the-field.  They want to appear shorter and less physically intimidating.

The discussion the pair have on this subject is illuminating, as is the opening of the second episode which starts with Daniell asking his wife – accomplished journalist and broadcaster Noelle McCarthy – if she ever feels scared of him.  Her response is not quite what he expects and causes more reflection.

New Zealand’s relationship with rugby is complex and meaty material.  But Daniell is well equipped to traverse it and, not surprisingly, the impact of the game on his psyche and how he sees himself, as a result, is an intriguing topic matter for him.

He is hoping for rugby to lead change, responding to Tu’inukuafe confirming one thing that hasn’t changed in the All Black attitude – a test match is war without guns and a core mateship mindset is still required to survive.  The key difference is that the All Blacks now talk about it rather than portraying the stoic and expressionless approach of the past.  They’re “hippies going to war and being comfortable with rainbow-coloured bootlaces and selfies”, quips Daniell. 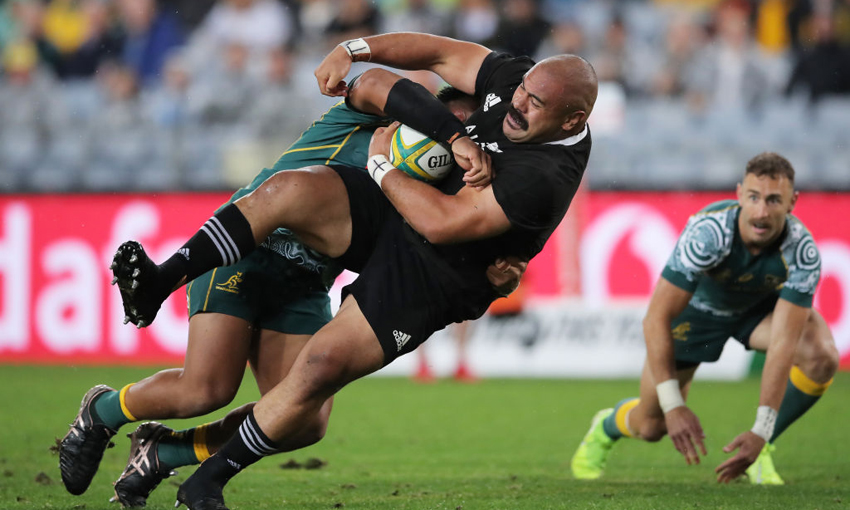 Karl Tu’Inukuafe scores a try during the 2020 Tri-Nations and Bledisloe Cup match between the Wallabies and All Blacks (Photo: Matt King/Getty Images)

The other half of He’ll Be Right in McConnell is clearly intended to be a counterpoint to Daniell.  He’s an already accomplished journalist, and this podcast is another sign his future is very bright.

Daniell brought the podcast concept to Stuff and it was senior executive Carol Hirschfeld who introduced him to McConnell and suggested the dual host approach.

It works as McConnell looks at the same topic of body images through a younger and slightly more nuanced lens.  An example is a chat in the opening episode with small-framed male model Rob Tennent who often wears women’s clothes because they fit him better. Both he and Tu’inukuafe make their living from their bodies, creating a discussion on whether there is a perfect men’s style of body in 2021.

Tennent surprised the two interviewers when he hugged them upon meeting both. His battle for acceptance is eye-opening but also encouraging – both in how he has mastered his own destiny and in society’s increasing understanding of those who choose a different journey to others.

There are useful cameos in the opening two episodes from the likes of McCarthy and another accomplished journalist in Alison Mau, Stuff’s MeToo editor. This provides a needed view from women on He’ll Be Right, balancing what could have been an overkill of men’s viewpoints.

Mau, who is refreshingly honest about some of the challenging elements of the MeToo movement, talks of her teenage son’s attitudes and a generational shift of “please be a gentleman” to “don’t be a dick”.

Tu’inukuafe worries about his three young sons and the fact his oldest is already concerned about how his hair looks even though he’s only eight. This is something I worry about too with my own grandchildren.

The series promises to traverse some interesting topic matters in coming episodes. Perhaps the most encouraging element of He’ll Be Right is not just that it’s seen the light of day but that we have a New Zealand-owned private media company working with a government funding agency and freelance journalists to create a series shining a light on a hugely important topic.

This type of collaboration is well overdue in New Zealand media. The media and government have failed in this country to work together as well as they could have for community good, certainly when compared to other industries.

There needs to be more of these type of content partnerships. I’m eager to hear the rest of the series and to continue to have my thinking challenged.

The first two episodes of He’ll Be Right are out now.