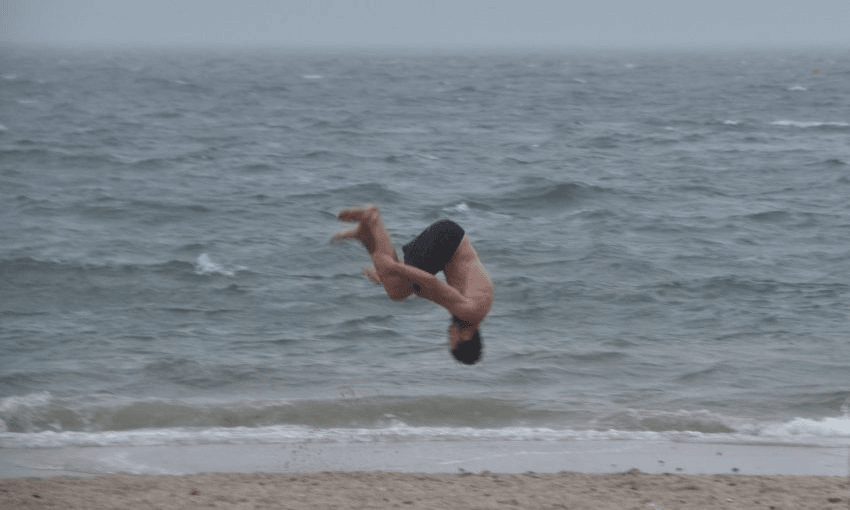 As ex-cyclone Gita tore towards the midriff of New Zealand, the Spinoff asked photographer Sean Gillespie to capture the city’s encounter with the storm. For the capital, Gita was mercifully less violent than anticipated, but Sean still managed to capture some sweet Wellington snaps.

Civil Defence had told the capital to prepare for power cuts, water outages and road closures; the best weather forecasters warned of imminent heavy rain and 140km/h winds. You’d understand if people were worried. But this is what Wellingtonians were up to during the anticipated arrival of Gita.

Swimming in the harbour.

As per any other day, mass jaywalking.

One of New Zealand’s most dangerous sports: fishing off the rocks.

Meanwhile, savvy but-less-hardy backpackers were hanging out at the library.

Biking home, because anyone who cycles regularly in Wellington is frequently subjected to worse.

A romantic and atmospheric walk on Oriental Bay promenade.

A run on the beach. And perhaps a flip too.

Getting up early the next day to walk to work along the waterfront under blue skies like nothing had happened.

Celebrity Solstice passengers probably don’t share Wellingtonians’ indifference to weather, so may have been unimpressed with eating their breakfast on a lean in a supposedly sheltered harbour.

The storm might’ve unexpectedly brushed past us but, to be fair, Wellington is a hard place to forecast weather for. Not only is it sandwiched between the Tasman Sea and the Pacific Ocean, but the city’s weather is also heavily influenced by a series of mountain ranges.

And then there’s the role of Kāpiti Island and the Marlborough Sounds, which are said to protect Wellington from a third more rainfall. On top of that, Gita was one of the most complicated tropical storms ever seen in New Zealand.

The fact of the matter is, things could’ve gotten a bit crazy like they did in other parts of New Zealand and the Pacific – and they did get a bit gnarly in Wellington overnight. But this photographer was tucked up in bed by then.

By the way, eastern suburbs commuters might want to shout these guys a few brews.

The mayor and Garage Project have offered to look after the electricity workers who were sent out in the storm to fix downed lines above Aro Valley.