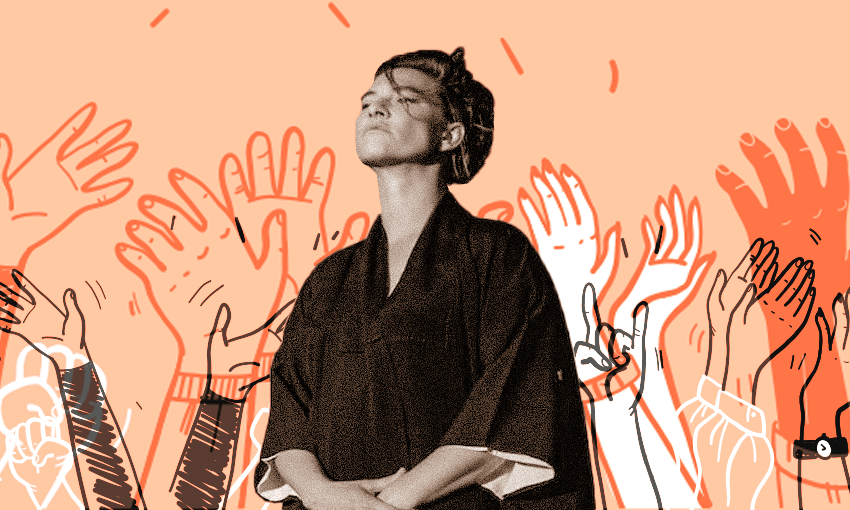 Did everyone spontaneously applaud Amanda Palmer in a Havelock North cafe? A Spinoff investigation

Right now, our most fiery national debate is over whether New Zealanders were nice to the singer Amanda Palmer in a cafe. Desperate to restore peace in our nation, Hayden Donnell went in search of the truth.

Joe Biden had barely finished calling for unity when Amanda Palmer posted a tweet that split New Zealand in two. Her message began innocuously. “Just walked into a coffee shop here in Aotearoa New Zealand,” she said, believably. But then, the kicker: “and everybody behind the counter, not really knowing me but knowing I was American, erupted in spontaneous applause”

Palmer’s claim was incendiary. It didn’t mesh with the Aotearoa New Zealand many of us thought we knew, where any achievement, from getting an A on an assignment to winning the Rugby World Cup, is met with a grim nod and a stern reminder not to get too full of yourself. She was asserting that New Zealanders were not just nice, but effusively nice in public. It had to be a lie. “Insufferable,” tweeted David Farrier. “The New Zealand cafe that spontaneously applauded Amanda Palmer has closed due to it not existing :(((,” wrote ‘Peter Taggart’.

These doubters were met with a strident backlash. Entrepreneur Nat Torkington was Palmer’s fiercest defender. “I’m seeing the occasional lazy Kiwi would-be pundit making ‘Kiwis don’t do that’ smirks. Get fucked. And take your staunch broken manhood toxic masculinity bullshit ideas of how we are with you. YOU might be a prick,” he tweeted. The general tenor of the response was that New Zealanders are actually lovely, and anyone who said otherwise was a fuckwit who could get fucked immediately.

In truth, all of us were shouting in the dark. We were projecting our ideas about the character of Amanda Palmer, and New Zealanders as a whole, like shadows on a cave wall, then getting mad at anyone who didn’t share our vision. The situation needed cold, hard facts. If we could figure out whether people spontaneously cheered for an American singer in a cafe, then New Zealand’s problems would be solved. My only real option was to launch a Spinoff investigation.

The first step was figuring out Palmer’s location. This was easy. The Spinoff had already independently established that she’s living in Havelock North. The second step was finding out the cafe she visited. This was more difficult. Palmer’s tweet was sent at 11.04am, a prime coffee hour. Google showed 20 results for cafes near Havelock North. It seemed I was in for a lot of both journalism and reporting. Thankfully though, some cafes looked more like possible Palmer destinations than others. Hawthorne Coffee Roastery and Espresso Bar especially seemed like the kind of boutique operation that would be frequented by a niche American artist. I decided to call them first.

“I do know she is a regular here, and has been here numerous times,” said the first person I spoke to. He put me onto the store’s manager, Chris Coleman. I read him the tweet. “Yeah, it happened,” he said.

Coleman said the day before Biden’s inauguration, Palmer came in for her regular coffee fix and spoke to him about US politics. “We were discussing whether it was going to kick off with the Trump supporters and things with the protest,” he said. When Palmer arrived the following day, Coleman clapped and said congratulations as she walked in. “I don’t recall it being a major thing,” he said. “It was kind of like good for you. Way to go. Glad that there’s a change.”

Coleman said he knew Palmer was a musician, but they’d never discussed her work. There were no major factual errors in her tweet, he said. “The clap and the wahoo did happen. And the congratulations. I can confirm that.”

After considering Coleman’s testimony, this is The Spinoff’s official fact check of all the components of Palmer’s tweet.

This is true. There is overwhelming evidence that Palmer did visit a coffee shop/cafe.

Claim #2: And everybody behind the counter

This is mostly true but arguably misleading. Everybody behind the counter clapped for Palmer. But in this case, everybody was one man: Chris Coleman.

Claim #3: Not knowing me but knowing I was American

This is mostly false. But that’s not Palmer’s fault. She had no way of knowing Coleman knew about her music career, as they’d never discussed it.

This is mostly true. Coleman did erupt in spontaneous applause, but the fact they’d had a prior discussion about the inauguration is important context.

Overall, Palmer’s claim is rated One Pinocchio. It contains selective telling of the truth, and some exaggeration. However, the overarching impression the tweet left is that New Zealanders are a kind, generous and publicly effusive people. That idea has been proven false by the backlash to the tweet, among many other things. It is rated Four Pinocchios, and will one day be lowered with Satan and the rest of his lies into the fiery pit. Now, it is time to end this uncivil war. The answer is not to turn inward, to retreat into competing factions. Unity is our path forward. May god bless you all and may god bless the United States of New Zealand.