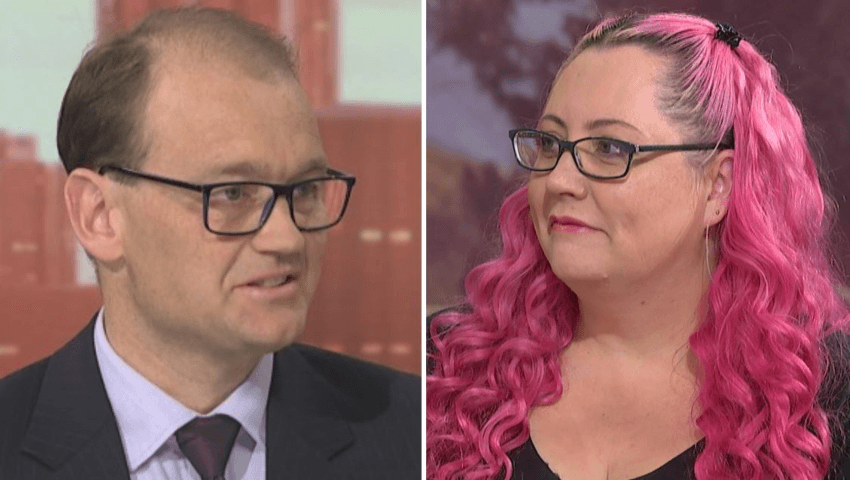 The prominent opponent of NZ’s response to the Covid-19 pandemic demanded changes and deletions to a Spinoff commentary by Wiles, while insisting he was making no ‘attempt to suppress genuine public scientific criticism’.

Spinoff journalism is made possible thanks to support from members. Click here to learn more.

Simon Thornley, the leader of New Zealand’s Covid-19 “Plan B” group, which has vigorously opposed New Zealand’s pandemic response and railed against “Covid obsession”, has threatened legal action against Siouxsie Wiles and The Spinoff in relation to an opinion piece published in May.

Lawyers acting for Thornley, a University of Auckland academic, wrote on May 21 alleging that an article by Wiles, headlined “There’s a lot of vaccine BS around. Here’s why I won’t be debunking it”, was a “defamatory publication”.

In the article, Wiles, also an academic at the University of Auckland, addresses “all the ‘fake news’ about vaccines that’s floating around” and notes research which suggests debunking specific claims can be counterproductive.

Thornley is mentioned once in the piece, in reference to his connection to the group Nga Kaitiaki Tuku Iho Inc (NKTI), which recently took the New Zealand government to court to try to stop the Covid-19 vaccine rollout. “Simon Thornley of the Plan B group, about whom I’ve written before,” she said, “has given evidence in support of the group trying to halt the rollout.”

Thornley, a senior lecturer in epidemiology and biostatistics, does not dispute the fact of his evidence in support of the action led by Nelson lawyer Sue Grey.

“Although, viewed in isolation, this reference to Dr Thornley might appear innocuous, when considered within the broader context of Associate Professor Wiles’ article, and prior public comments she has made in respect of our client, we consider the articles to be clearly defamatory,” Thornley’s lawyers wrote.

“The articles at least infer that our client’s evidence in support of NKTI’s court proceedings constituted disinformation, if not imply that Dr Thornley is responsible more broadly for spreading or promoting disinformation.”

The letter went on to demand a series of corrections to the article, including a statement that “There is no suggestion that our client is producing or promoting ‘disinformation’”. It further stated: “The reference to Dr Thornley’s evidential support for NKTI’s proceedings should also be removed from the articles.” It required The Spinoff to “urgently confirm … that the reference to Dr Thornley in the articles will be deleted and that the above correction will be published at the bottom of the articles”.

Despite the demands, Thornley’s lawyer urged that “this letter should not be taken in any way as an attempt to suppress genuine public scientific criticism and debate”.

The Spinoff defended Wiles’ commentary in a letter from its own lawyers on May 26, noting that it “stands by the article, and does not consider that the publication of the proposed ‘correction’ is appropriate. It considers that the appropriate manner for Dr Thornley to respond to Associate Professor Wiles’ opinion is through continued public debate, addressing the concerns that she has raised.”

Thornley’s lawyer responded in turn on June 21, saying: “Our client is not interested in engaging in a debate as to whether or not the article in question was defamatory. However, for the avoidance of any doubt, and despite the labels applied, we do not accept that the defamatory content of the article is saved by the defences of truth, honest opinion or public interest, or on any other basis.”

It added: “Your client’s position is disappointing, but as made clear in our letter of May 21, our client’s primary purpose was to place Associate Professor Wiles, your client, and NZME [publisher of the Herald, which republished the article under a copy-sharing agreement] on notice that continuing publication of defamatory references to him will not be tolerated and will be met with appropriate legal action. That remains the position.”

In an interview for this story, Wiles said she stood by the reference to Thornley in her original piece and her previous arguments in relation to Plan B.

“I believe his arguments are wrong and poorly made, and I believe his decision to give evidence in support of the group seeking to stop the vaccine rollout was irresponsible and provides succour to those who peddle disinformation.”

Wiles said she did not resile from her earlier contention that he and the Plan B group have “cherry picked” evidence. “I’ve consistently argued that in their opposition to lockdowns last year, Plan B was highly selective in its use of evidence, as it was in its continuing attacks on the elimination strategy. The same cherry picking and use of questionable evidence is there to see too in Thornley’s most recent claims around death rates from Covid-19. His focus on the average IFR [infection fatality ratio] relies on an author who has been roundly criticised, while ignoring a range of other research. Even the focus on the IFR overlooks the wider impact of infection, such as Long Covid. The data on Long Covid shows just what a serious disease it is.”

Wiles added: “I have to say it is quite staggering, too, that Simon Thornley should deploy lawyers to send legal threats, especially given his avowed support for free speech.”

Despite the widespread criticisms of Thornley and Plan B from public health experts and other commentators, it was notable that she was apparently the only one to be in receipt of a legal threat, said Wiles.

A number of other individuals have targeted Wiles given her high profile in the New Zealand Covid response. “There seem to be a lot of people who don’t want me to communicate about the pandemic. Thornley’s legal threat comes on top of an Official Information Act request by a guy in Dunedin who thinks I’m lying about my PhD, the person who lodged a complaint with my employer about what they see as my ‘unethical conduct’, and the many nasty and abusive emails, phone calls, texts and social media messages. It’s exhausting and depressing.”

It felt to Wiles like “part of a pattern of harassment that I seem to be the only person receiving”.

Thornley was approached for this story but refused an interview. “I don’t want to discuss it sorry, I don’t want to comment,” he said in a phone call.

Wiles was named New Zealander of the Year in 2021 and was earlier this month given the Critic and Conscience Prize, awarded to support academics who engage in important public debate.

In March, an open letter from the group Fight Against Conspiracy Theories, signed by Wiles, urged the Plan B group to disassociate itself from Voices for Freedom, a group which opposes vaccines and other measures such as mask wearing, and, as reported by Stuff, “is known to spread conspiracy theories and encourage its followers to ignore public health guidelines”.

Despite VFF’s involvement in the dissemination of conspiracy theories, including the distribution of flyers containing misinformation and conspiratorial claims, Thornley was a keynote speaker at a March event held by VFF, and VFF members appeared on a Covid Plan B webinar in December.

Thornley told Stuff that Plan B and VFF agreed on some issues and differed on others. Both criticised the government’s “excessive response” to Covid-19, but “we don’t engage in conspiracy theories. We just share science. They share science as well. There is certainly some scientific stuff on their page … but I can’t take responsibility for what this group promotes.”

Michael Baker, an epidemiologist from the University of Otago, has strongly criticised Thornley’s ideas. He has not received any legal letters, and nor has Stuff, which published Baker’s remarks as part of an extended feature on Thornley and his critics.

“I have not heard of any academic debates in NZ resulting in legal action for defamation,” Baker said. “Such actions, if common, could have a chilling effect on public debate that would be very undesirable.”

In its letter of June, Thornley’s lawyer said that despite Wiles and The Spinoff being singled out, he “does take issue” with other articles published about him, but did not feel the need to reply to them with a legal letter because “others have effectively responded elsewhere”. A single reference is made to bear this out: a video posted by a Christchurch-based doctor whose claims about Covid-19 tests have been assessed as “misleading” by an Agence France-Presse fact check.