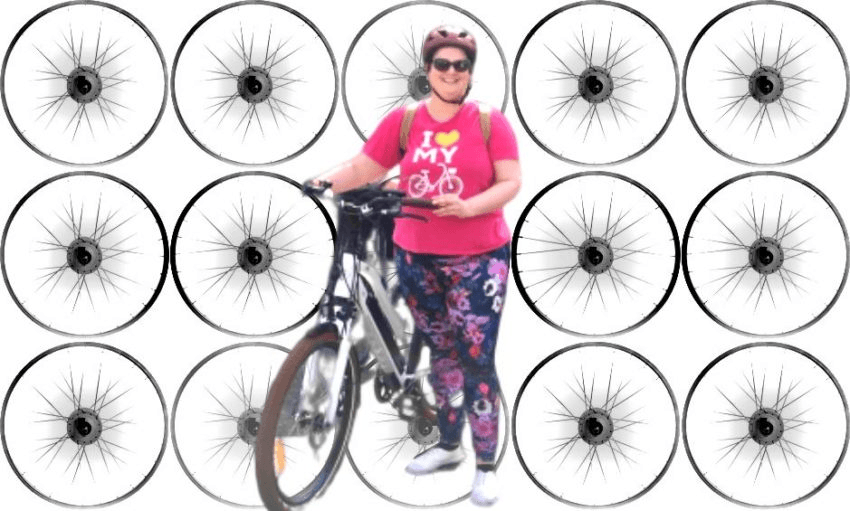 Riding my way through depression

There’s something about the feeling of wind whipping my face that brings me out of my head and into the moment. Once a month we pedal as a group: recreating the feeling of childlike glee riding our bikes together, writes Helen King.

The first bike I learned to ride belonged to my friend’s older sister. It was yellow. I remember zipping up and down the driveway, proud as punch I’d learned to master two wheels. I was rewarded with my own bike at Christmas, a red one. It took me a while to learn how to stop without crashing into bushes. Once I had turning and braking under my belt there was no stopping me. As I grew the red bike was replaced with a mountain bike, which ended up languishing in the garage, rusting and eventually given to a neighbour’s child.

As puberty hit I transformed from a cheeky child, eager to try new things and excel at school, into an awkward, anxious teenager. Depression crept in at 15, an unwelcome visitor who would take up residence in my brain on a regular basis. In my mid-20s I would enjoy longer breaks in-between bouts of depression, exercise becoming central to keeping myself on an even keel.

In 2017 I’d ignored all the usual signs of the start of a depression: irritability, fatigue, feeling flat and generally not caring about anything. I’d stopped training at the boxing gym that was my second home and rarely cooked. I felt numb a lot of the time. I fobbed it off for the perils of doing shift work. Lack of sleep and deadlines were part and parcel of being a journalist, as was being slightly dark and cynical. But this depression was savage. At 36 I’d been living with depression for 20 years, I was a veteran of mental health. This time it was much harder to bounce back.

I’d told a colleague I missed cycling but that now I was out of shape, riding Auckland’s undulating terrain wasn’t appealing. He suggested I ask Mercury Energy to borrow one of their e-bikes and write about it in return. Even for my addled brain this seemed doable and for a week I zipped around central Auckland on a bright yellow Smartmotion e-bike.

The week was magic. I felt pure joy for the first time in months. Cycling produces such a childlike glee for me it’s impossible not to smile as I pedal along. There’s something about the feeling of wind whipping my face that brings me out of my head and into the moment. And of course there’s the endorphins produced by exercise that help shake me out of a funk.

A few months after my re-introduction to bike riding I was faced with another health challenge when I was diagnosed with an aggressive form of breast cancer. Aggressive cancer needs aggressive treatment and the months during chemo were spent mostly in bed. The internet became my lifeline to the outside world, I spent hours in bed watching videos on YouTube and overthinking. Time spent alone with your own thoughts is a dangerous place for someone who lives with depression. Steroid induced insomnia is not a state I want to visit again.

Depending on what cocktails of drugs you are on the chemo cycle follows a very particular pattern. I knew by day 7 I would be coming out the other side and could shuffle up to my local shops for a coffee. I lived on my own and the interaction with the lady at the bakery, the barista at the cafe or the dairy owner was sometimes the only human contact I had in the day. It was during this time it occured to me one of the main antidotes to depression is a feeling of connection with others.

Chemo rips through your body, unable to distinguish between the cells trying to kill you and innocent bystanders. Of all the changes to my body I most missed feeling strong and being active. During one of the aforementioned steroid insomnias I had an idea: I wanted to create a group for people who live with mental illness that involved bike riding. I wanted to share the joyfulness of bike riding with other nutters like myself.  A space to be open and honest about having a wonky brain. And to create a community, a third space where people can come and connect before re-entering their normal lives.

Nutters Ride Together was born and we went on our maiden ride during Bike Auckland’s Biketober 2018. I was bald as a baby and not able to ride far but riding as part of a group felt good. This year we celebrate a year of bike rides, I never know who is going to turn up, which is part of the fun. But once a month we recreate the feeling of childlike glee riding our bikes together.

It would be tempting to say bike riding cured my depression but the truth is when I’m depressed I can’t manage the basics. When I have the energy to get in the saddle it gives me a reprieve from the relentlessness of depression and for those moments I’m on a bike I feel free. There is no cure-all for depression, in my experience I need multiple “tools” to help keep it at bay or get through a bad patch. The key has been to find something that brings me joy, even if it’s just for a moment, and I’m lucky I have found that in cycling.