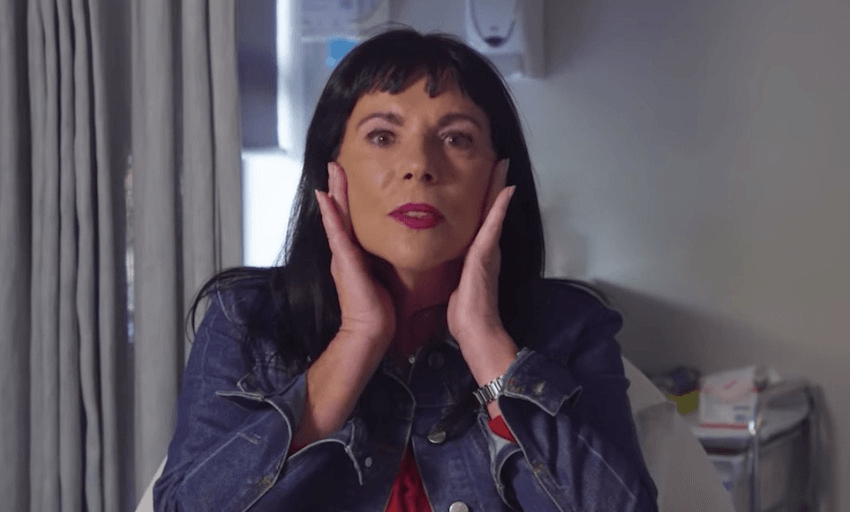 For the ageing episode of On the Rag, Michèle A’Court decided to take herself along to a plastic surgeon to see what needed sprucing up. The results may shock you.

I’m not as young as I used to be. I know this because a) I have a mirror and b) people mention it. It’s a go-to observation for people (men) who want to have a crack at my ideas online (“old hag!”) or in those environments where comedians take the piss out of each other in a jocular fashion.

The idea here is that the older a woman is, the less fuckable she is. And at which point, honestly, what is she for? Nope, can’t think of a thing. (Of course, the ideal response to this is, “I am delighted you don’t want to fuck me because that leaves you with more time to go fuck yourself”. Tuck that away in your arsenal of witty rejoinders.)

Certainly, ageing is an issue for all genders. It speaks to our mortality, our current usefulness, and feeds our anxiety about running out of time. You will find yourself looking ahead to a time when the world will go on without you (how is that even possible?!) and looking back with a judgemental eye on what you have achieved so far.

But for women, there is more at stake. Imagine for a second (this won’t be hard) that we live in a world where women are valued on a primal level for their perceived ability to procreate – to be plump, fresh, youthful vessels for making babies. Imagine that we are hard-wired to read her attractiveness in terms of her theoretical fertility and the actual effect she might have on male loins.

Then imagine that any signs suggesting she is no longer good for that – grey hair, wrinkles, menopausal flushes – make her less fun to have around.

And then think about this wild conundrum – that despite how she looks, she feels every bit as vital and useful as she always has, plus smarter and wiser than ever, with more time and energy to get shit done because the kids have probably gone flatting. In short, the way the world sees her doesn’t match the way she sees herself.

As much as I fancy Option A, there is a $532 billion industry boosting Option B. An ocean of options that, on any given day, I will dip my toe in. There are creams and serums in my bathroom, dyes in the laundry, and now and then I get a nice lady to vacuum my face. It feels a lot like being licked by a cat, which I would also try.

On the continuum between “sunscreen” and “face transplant” I’ve always stopped just short of “scalpel” but, in the interests of research, I took my face to a plastic surgeon and asked what she could do with it. It felt as risky as taking an old car to a mechanic – I fully expected a lot of tut-tutting and some version of “parts will be a bastard”.

Dr Meredith Simcock was actually really nice. She deals mainly in reconstructive surgery for women post-mastectomy, and her ethos is about helping women feel comfortable in their bodies, instead of creating something for the male gaze. Immediately, I trusted her not to suggest turning my used Cortina into a new Maserati.

She knows that, while men also look for ways to hold back the years, women are much more likely to end up sitting across the desk from a plastic surgeon. In gentler times, we might have picked up a glossy mag filled with images of unattainable perfection once or twice a week, but we still spent the bulk of our time looking at regular human faces.

Now, however, we are bombarded with images on our phones of over-filled, over-botoxed faces until they are imprinted on our minds as the norm. And then we look in the mirror and realise that we don’t look like those people.

Dr Simcock is a fan of wrinkles, particularly the “dynamic” kind – the lines your face makes when you express emotions but which disappear once the emotion passes. The trick, she says, is to catch these dynamic wrinkles before they become “static” – a worry line, for example, that sits on your face even when you’re not worried.

Which makes sense, right? Who needs a face that tells yesterday’s anxious story when today’s tale is serene?

For my face, “fat grafting filling” would be the go, she said. Take some fat from somewhere I didn’t need it and inject it elsewhere to recreate the fullness I’d once had. Cheeks, temple… Perhaps a firmer jaw line… Maybe take a little skin from the upper eyelids to open the eyes up… Just a bit of tinkering around to make the whole thing look fresher, like I’d had a long, restful holiday.

I had to think to myself at that point: maybe I’d just like a long, restful holiday.

That was about where I’d landed by the time the interview was over. I didn’t feel judged or crushed, and had no need for the tequila I’d laid in for the eventuality that I’d crawl home, broken and sad. It felt like there were two clear options – working hard and saving up to stick thigh fat in my face, or a couple of weeks off in Rarotonga, each of which might give the same result. And I like snorkelling.

Future me might make a different choice, of course. I had a long chat one evening with a friend, also in the business, who had seen my interview. She’d had some tinkering and she spoke highly of it – some of it thrilled her at the time, some of it still pleased her. Unspoken in that conversation was both of us acknowledging that how we look is, too often, a weapon used against us. And that there are days when you feel you have taken enough hits. I can totally understand Option B.

And yet… I still always come back to this Indigo Girls song that I like. I’ve been singing along to it for years. It’s about life on the road, and getting older and heavier, and not stopping but maybe resting long enough to celebrate what you’ve done. “With every lesson learned / a line upon your beautiful face / We’ll amuse ourselves one day / with these memories we’ll trace.”

It would be a shame not to see all the stories, right?

Watch episode one of On the Rag: ‘Periods’ here

Watch episode two of On the Rag: ‘Body hair’ here

Watch episode three of On the Rag: ‘Being Online’ here

Watch episode four of On the Rag: ‘Ageing’ here

Watch episode five of On the Rag ‘Abortion’ here