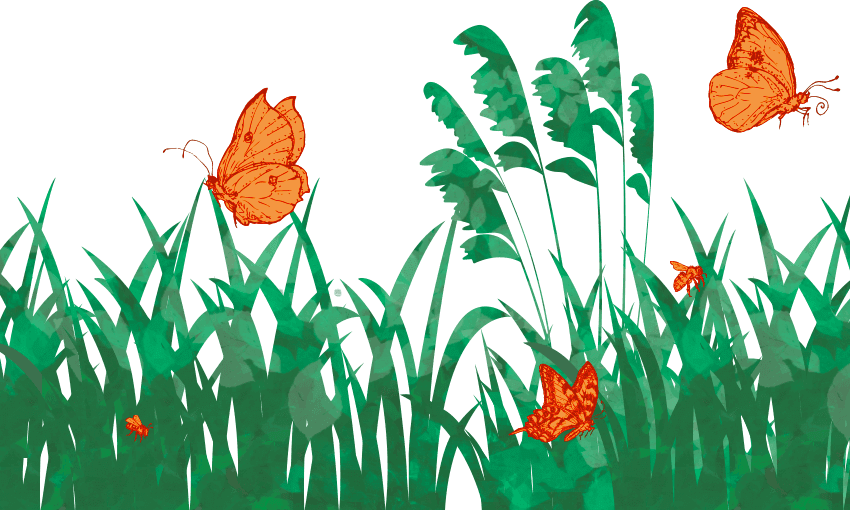 Manicured squares of grass have come to symbolise neighbourly pride and uniformity, but letting your lawn go a little wild has all kinds of benefits, writes Athena Rhodes.

A well-kept lawn is almost synonymous with the suburban dream.

People spend hours maintaining their little patch of personal grass. From mowing and watering to weeding and spraying, a lot of labour goes into this symbol of “look neighbours, I have got my life together”. Because this is what it essentially is, a way to show everyone else that you are a respectable adult who knows it is his or her neighbourly duty to add to the uniformity of the suburban landscape. And we don’t just spend a lot of time on this neighbourly duty, we also spend a lot of money.

A study that surveyed a thousand Auckland households found that Aucklanders spend around $131 million a year on their lawns. The upkeep of our public spaces, meanwhile, falls to our local councils, which spend hundreds of thousands to millions every year to maintain them. It’s understood Hamilton City Council spends an estimated $720,520 on mowing machinery and labour to maintain the parks in the city.

But for what reason do we pour all this labour and money into a lawn? A lawn does not produce crops, it does not have any seemingly utilitarian function, but western society celebrates lawn culture. Mowing has become part of normative social behaviour: one of the many unspoken rules that society has written on the stone tablet of proper etiquette. An unkempt lawn is synonymous with being an undesirable neighbour and possibly a vagrant.

Various research on this lawn-mowing etiquette has reached some interesting conclusions, ranging from that lawn mowing is as important for some people as having dinner with family, that one of the main driving factors behind mowing the lawns was that residents did not wish to invoke the disapproval of their neighbours, and that having a well-maintained lawn led to better relationships with neighbours. All in all, the general consensus is that mowing a lawn is a neighbourly duty and will help you be accepted into the community fold. It’s human nature to want to fit in, so it’s not surprising that this is a driving force behind lawn culture.

But why do we find long grass unacceptable?

The lawn is a relatively modern invention. It sprung forth from the properties of wealthy English and French in the 17th century. Aristocrats would have labourers out in their grounds hand-cutting the grass using scissors or scythes. This idea, alongside pockets of grass seeds, spread outwards, reaching the shores of America, Australia and New Zealand, with the colonists bringing these ideals to these countries. And with the invention of the lawn mower, it became a lot easier to maintain a cut lawn.

In the past, the lawn was ornamental, a symbol of your wealth and whimsy. Now, well, it still is aesthetic in nature. A symbol of neighbourly pride and uniformity as well as something that is purely hedonistic in nature.

We want our lawns to look good. To show off. To fit in. To feel good about our status as well-to-do property owners who have the time to and can afford to regularly mow the lawn, perhaps a runoff from the past status of a mown lawn being a wealth symbol.

If you walk past a property that has an unkempt lawn, what comes to mind? Is it that this property is in a state of disrepair?  That the occupants mustn’t have their life together if they can’t even maintain a square footage of grass. Some people will dob their own neighbours in if they allow their berms to get overgrown, or will even take matters into their own hands and mow them themselves. An incident such as this happened in a wealthy suburb of Dunedin, when neighbours without permission mowed a woman’s verge because she had decided to let it go wild. To bring her back into the fold of acceptable lawn etiquette. And in Auckland, a woman was forced to rip out flowers and fruit trees from her berm when she was ordered to do so by Auckland Transport after a complaint was laid.

But the fact of the matter is that maintaining the perfect lawn has not only financial but also environmental ramifications.

Reducing the frequency by which you mow your lawn can have a number of benefits for the environment, both in the absence of using the lawn mower and in not touching the grass. It’s estimated that lawn mower emissions are responsible for around 5-10% of urban engine pollution. And you know that freshly mown grass smell? That’s actually a release of chemical compounds that interact with other air pollutants and can worsen smog.

That’s not even taking into account the fact the water is used to maintain lawns, especially during summer, on top of the herbicides and pesticides used that run off into the environment. All in all, maintaining a well-manicured lawn can be quite harmful to the environment.

And by allowing the grass to get a bit wild, you’re supporting urban biodiversity. Bees go wild for a little bit of unruly grass. When the lawn is allowed to grow past its strict 3mm length, a whole ecosystem unfurls – one where bees and butterflies go wild for the blooming clover and dandelions, crickets can be heard throughout and spiders creep about the grass blades.

There is a growing movement that is embracing a more naturalised lawn with flowering weeds and overgrown grass. Sustainable meadows, no-mow lawns and bermaculture are terms that have sprung up as people move towards more wild in their urban landscapes, replacing well-mown lawns with something that either supports a more varied ecosystem or something a bit more utilitarian, such as a vege patch or fruit trees.

Bermaculture means saying a big fat no to well-mown berms and verges and instead letting them go wild or planting them out. There are even Facebook pages devoted to this offshoot movement. One woman in Hamilton decided to plant out her berm with kūmara and other crops, a move that has actually been supported by the local council. With the intensification of housing, perhaps grass areas will be utilised for crops and flowers. A network of urban gardens.

Hamilton Council allows the grass in natural areas to be kept at heights anywhere from 75-150mm. They mow infrequently to support wildflower meadows, and reduce their carbon footprint. In Auckland, meanwhile, there’s a no-mow pilot at Grey Lynn Park, which, if it goes well, will hopefully be implemented in other public spaces around Auckland.

Auckland Botanical Garden is trialling a sustainable meadow, where different mowing techniques are being used to encourage the growth of smaller grass and herbs rather than long grass. When this was first launched, visitors complained about this unkempt space. They thought that it was not being maintained properly – left to go to the dogs. But when the gardeners began to mow paths in the meadow, the complaints stopped coming in. This small change transformed this area from being seen as neglected to something with a purpose and functionality. The meadow is now enjoyed by picnickers and children hunting for fairies among the blooms.

Jumping into no-mow headlong at home can a scary prospect. Because truly, what will the neighbours think? A good way of giving it a go is to leave a little patch of grass unmown next time you do the lawns, and watch the clover and flowers spring forth. Another option is to put a little sign on your fence describing what you’re trying to achieve with your lawn and explaining the benefits.

By allowing a little bit of wildness in our private and public urban spaces, we’re increasing urban biodiversity by supporting a burgeoning ecosystem in these grass spaces, as well as reducing emissions through less frequent mowing.