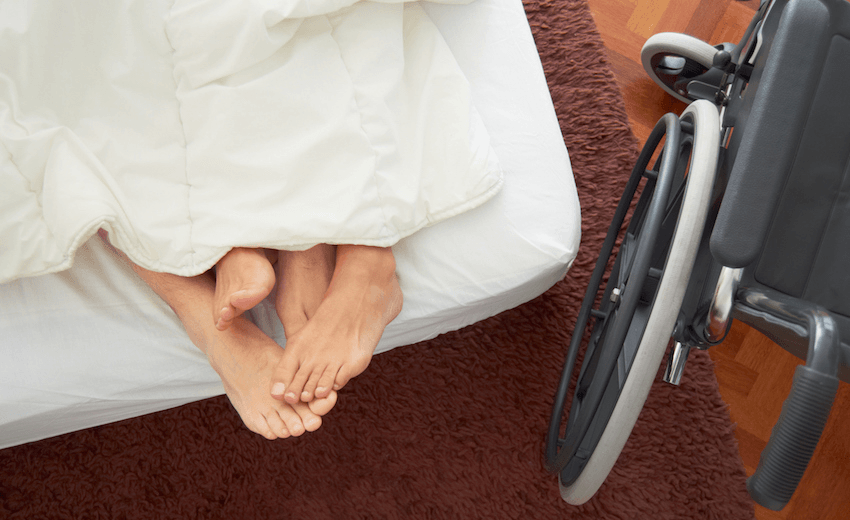 The reality of having sex when you live with a disability

Sex is a struggle for most people, but it can be doubly difficult for those living with a disability, writes Caroline Moratti for the Otago University student magazine Critic.

Is sex a basic human right? Not for your parents hopefully, don’t picture that.

To access sex remains a struggle that plagues most of our lives. It involves showering regularly, wearing inappropriate amounts of deodorant, and forcing yourself to make small talk about their degree. But for those who live with a disability, that struggle can become a lot harder.

The word disability exists on a large spectrum, from physical impairments to those that live with autism, down syndrome and the like. A disability might hinder your access to sex in the sense that you might find yourself struggling to connect with someone – think about trying to hook up with that girl in the bar if you had Tourette’s. And the mere physical act of sex perhaps becomes a lot harder if you use a wheelchair. Despite the many “sexy singles in your area” that Pornhub alerts you to, sometimes meeting people can be really fucking hard. Hell, sometimes you have to write for a shitty student magazine just to force people to interact with you. Living with a disability makes all this so much harder, often isolating individuals who are among society’s most vulnerable.

But do we need sex? Think about it – plenty of people don’t have sex: St Margaret’s residents, members of youth political parties, people that use Snapchat filters. The list could go on and on. And they’re all reasonably happy, well-functioning members of society (OK, ‘happy’ is a bit of a stretch for St. Margs, but at least they’re getting into med.)

On the other hand, sex is great, from what I’ve gathered lying awake at night listening to my flatmates having a lot of it. It’s known to reduce stress levels, keep your immune system healthy, and even reduce some risks of cancer according to a dodgy WebMD page. Not only that, it’s exercise, which is apparently “good for you”, whatever the hell that means. More importantly, if this is something the disabled community has raised as something important to them, it’s not really anybody’s place to wave it away as a non-issue.

Tom McAlpine lives with cerebral palsy, which affects his body movement and muscle coordination. He works with Paths Together, a well-being advocacy network working to promote awareness of sexual issues affecting the disabled community. He’s been working for five years, mainly through Facebook, to highlight these issues which others avoid. Although the dialogue is slowly changing, he describes it as a “real challenge.”

“No one really has the time to sit and listen to what has been my life story. I’m disappointed at how slow the conversation can be sometimes.”

McAlpine offered us an insight into some of his personal challenges, which have left him fearful after he booked a sex worker through the Otago Daily Times pages.“Last week where I was using a sex worker, she came to my house, but it was actually a scam where I gave her $100 and she just walked out. I got robbed. I had the police involved, but they said it was just small claims. I’m quite worried about that looking forward, and about other vulnerable people who also experience similar situations.”

It’s instances like these that reveal the dark reality of how society functions against the disabled community. If you’re unable to chase someone, often that leaves you exposed to people taking from you, both literally and metaphorically.

Sometimes it can feel like the whole world is against you. Almost all brothels are upstairs – not exactly the most wheelchair friendly places. “I don’t think a lot of massage parlours are interested in these issues, which is a shame, because it could be a huge business opportunity for them,” says McAlpine.

This often forces clients to ask for home visits, which can hike up prices and make them vulnerable. Sometimes specialist equipment or extra time is required. Perhaps a disabled client simply wants someone to hold them, but unlike in major cities that boast a variety of professional “cuddlers”, you have to hire a full-service sex worker for the same service in Dunedin. For a community that’s often already cash-strapped due to costs that exist outside of the bedroom, such as mobility vehicles and medication, these costs are sometimes impossible.

Catherine Healy, the national coordinator of the New Zealand Prostitutes’ Collective (NZPC) spoke to Critic in response to these concerns. She said: “NZPC provides services to all people who are sex workers, including information about the reality of being a sex worker and working either with a disability or with clients who may have disabilities… it’s not uncommon for sex workers to have clients with disabilities.”

Having established the range of problems disabled communities have around sexual fulfilment, it’s time to turn to the thinking chair to figure out how to solve them. For starters, one could petition for radical change at a government level. This isn’t as crazy as it sounds. The Netherlands has a range of social subsidies for people with disabilities, including a grant that gives them up to 12 sex worker visits a year. A scheme like this would definitely be possible in New Zealand thanks to the decriminalisation of prostitution, so someone should drop Jacinda a hashtag on Twitter or something.

I have no idea how political change works – I’m still taking selfies to try and stop Kony 2012 – but McAlpine is sceptical this idea will ever get off the ground. He blames “conservatism mixed with old traditional values” for the stance that New Zealand takes around issues of sex and disability. This doesn’t mean it’s not something to push for, however, because much like pulling an all-nighter on your 35% essay, hope always exists.

Locally, there’s work happening to change perspectives and experiences. Enabling Love is a Dunedin-based dating website aimed at connecting those with disabilities to each other, with those able-bodied and willing to date within the disabled community also encouraged to get involved. The platform can be used for romantic or platonic hook-ups, and the site also hosts a range of events such as speed dating, movie nights and social sport. Suddenly, Tinder is really paling in comparison. Where are our board game nights at?

It’s clear change is happening, although arguably for the disabled community, this change isn’t happening fast enough. McAlpine says that “social attitudes are going in the right direction” but sometimes these good intentions fail to manifest themselves as tangible differences. There are still setbacks, such as the film Me Before You which created an uproar over its depiction of a paralyzed man who (spoiler!) chooses to end his own life, feeling like he was a burden on his family and notably couldn’t pleasure his girlfriend. That’s a very rushed film review, but you get the gist. At the end of the day, despite all the setbacks and systematic boundaries, the message should be the same. Everyone deserves the right to feel loved, to feel sexy, to experience some shitty fingering and mediocre oral.

At a more attainable level, raising awareness is something that we can all do. Talk to your friends, family, or random girls in the lines of club bathrooms. Who knows? One of them might be the next to design a new, disabled-friendly sex toy or harness. If you have friends with disabilities, talk to them about sex if they feel comfortable with that. Talking about it is nearly as good as the real thing, or so that’s what my parents tell me.