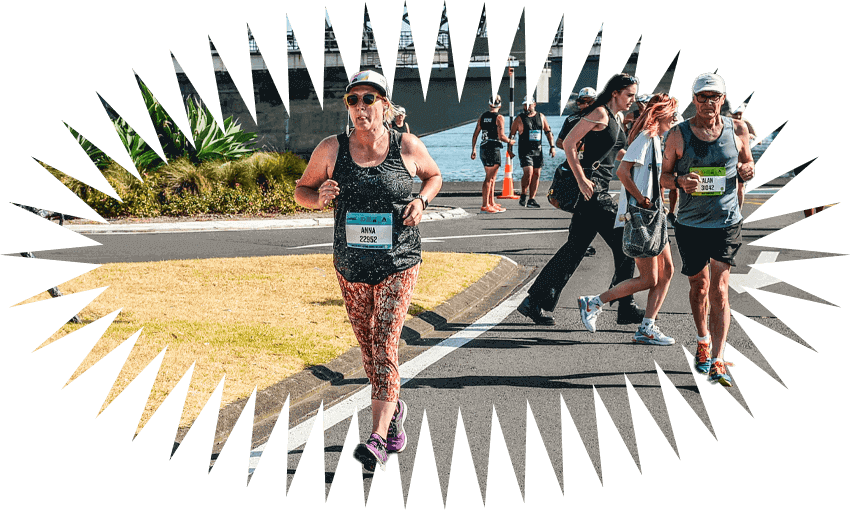 The art of the plod

Anna Rawhiti-Connell finds freedom in being really shit at something, but doing it anyway.

On January 23, also known as “Red Light Sunday”, I completed my first half marathon. I came 2,255th. There were 2,479 entrants. The person that finished first ran it in just over an hour. That man’s body moved three times faster than mine. I ran faster than 13% of my fellow participants.

Obviously this is an achievement. To run from Devonport to Victoria Park is a great, if not unnecessary, feat. But those are objectively average results. As demonstrated by the objectively average supplied photo, taken during the last five kilometres of the run, I am barely moving. My feet are barely leaving the ground. I shuffled that last five kilometres. People who were walking passed me. Muscles I had not trained for this run were instrumental in getting me over the finish line. I have searched the internet and there is no guide to training your tongue for a half marathon and yet, there it is, prominent, protruding and working hard.

I am objectively an average, perhaps even bad, runner. I run heavy, on my heels. My hamstrings have been described by someone familiar with hamstrings as “the tightest I’ve ever observed on a woman”. No matter how hard I try, I cannot really locate my glutes, let alone activate them. I literally have a lazy arse. I imagine my calves and quads diligently doing all the work on a group project in the library of my body, while the rest of my muscles lie around on the beanbags, drinking Zap and looking for rude words in books.

I truly think I picked up running properly after a friend said she thought it suited me. I collected this tiny fragment of observed identity and turned it into a mural. This friend is also the author of a whole 759 words on why she gave up running. She had imagined herself becoming Haruki Murakami when she ran, and so I did too, despite pretending to like his writing more than I actually do.

To me she was saying, “you are a lone wolf”. A serious, contemplative person who could only exercise and think in her own company. My disposition, too solitary for team sports. My mind so full and weighed down that illumination could only be found in communing with the elements, beaten out heel strike, after heel strike on the hard and hilly roads of the North Shore.

This is total bullshit. I think of literally nothing while I run. I cannot. I have tried. “Think, think, think,” I think to myself. So far all I’ve been able to do is listen to bad pop music in a bid to drown out the sound of my own heavy breathing and the thunk, thunk, thunk of my plod.

I plod. I am not good at running. There is a good chance I will not get much better at it. I do not love it. I experience no runner’s high, nor sketch out great works of art in my mind. All of this runs contrary to a deeply honed and conditioned instinct to pursue only that which I am good at. So why do I do it? Why do I find satisfaction in it? Why am I committed to the thunk, thunk, thunk?

As a kid, I competed ferociously. Not in sports – I think that’s obvious by now – but in the academic arena and in the performing arts. Every year I competed in endless speech and drama competitions. The results would be published in the local paper and despite knowing the results (with a clutch of certificates arranged in order of place next to me) I would spend hours scanning the lists for my name and place. First, good. Second, an absolute disaster. My scene from Heidi had lost out to Annabel’s from Anne of Green Gables and it cut me deep. I had nemeses from a young age and I still think envy is the sin the serial killer in SE7EN would do me in for.

I run because I believe I have embraced the art of the plod. That is my name (trademark pending) for finally realising, after 42 years of being alive, that deep, soulful satisfaction can be found in being shit at something and doing it anyway. It is the doing of things that you do not excel at, can not monetize or become famous for. The first rule of the art of the plod is “perfect nothing”. That is really the only rule.

The art of the plod involves humbling yourself before your own limitations. In the past I stopped doing things like singing because I would never be on Broadway. I would be paralysed before taking on something new, for fear of not being good at it. And then I wouldn’t do it. I’ve also been a real shitheel about other people daring to do things they aren’t good at. This isn’t to say that everyone gets to be elevated to the heights of those that are great at things just because they’re doing them. That’s kind of the whole point of the art of the plod. You don’t do things for the sake of competing, amplification, money or critical acclaim, but because you want to. If you decide you want to write but are not so great at it, you will not get a regular gig at The Spinoff, but you might still enjoy it anyway. Perhaps you will improve over time, but the idea is to value the process over the progress.

I will run the half marathon again. Perhaps I’ll shave a few minutes off the three hours I did it in. But I am also very happy not to. I run not to say something about myself to the world or even achieve that much. I run simply for the freedom of knowing I can do something that I am not good at because I want to. It provides respite from a world that demands we “be optimising” all the time.

In this, the third year of the pandemic, I am tired. You are too. I can not “rise and grind”. I cannot “hustle”. I cannot continue to be weighed down by an anchor of ambition that is encrusted with vacuous external success metrics and my own dumb jealousy. I refuse to feel like I am achieving nothing simply because we live in a ridiculous world where teenagers are plucked from their bedrooms and put into mansions to make TikToks and go on to achieve wealth and fame. All power to them, but that is objectively very stupid.

I do not have 10,000 hours to dedicate to becoming really good at something like running. I need many of these hours to lie down and eat chips off my chest, using only my strangely propulsive tongue.