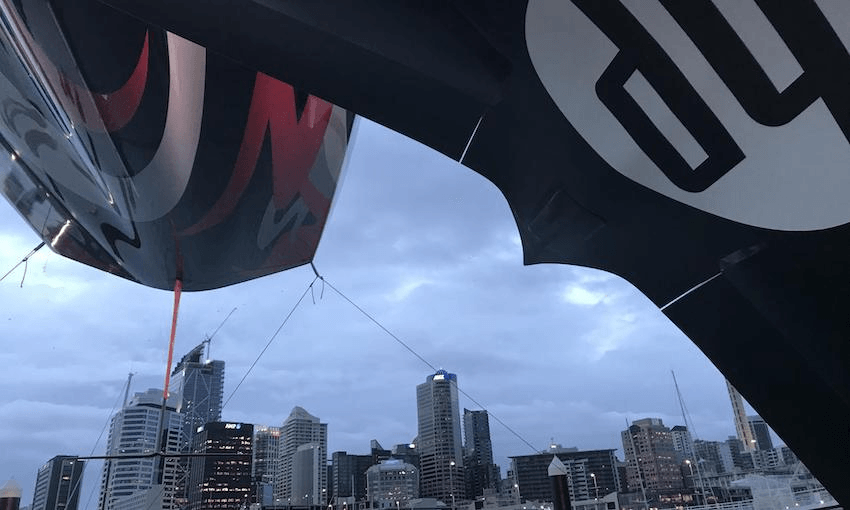 Launching the whale: At the unveiling of America’s Cup boat Te Aihe

By James Littlewood
Guest writer
Made possible by

The first of Team New Zealand’s America’s Cup boats was officially launched this morning. James Littlewood wandered down to the Viaduct at 6.30 on a cold, wet, Friday morning to see what all the fuss was about.

The new boat hung in the drizzle looking not like a boat. But weird, like a ski boot, or a plastic mosquito. A snazzy plastic container for a new flavour of ice cream, maybe. There was certainly something cetaceous about it. Such a boat never existed.

The gathering crowd hoped for rain. Rain is good luck, people said. It rained the last time we did this. And we won. Rain’s good.

It rained. The prime minister commented that Emirates Team New Zealand wanted rain, and that it was indeed raining. “Evidence” she said, “that Grant Dalton gets what he wants.” It wasn’t her only punchline. She dispensed with Trevor Mallard because “I don’t like people holding umbrellas over my head: it makes me feel like I’m the Queen.” Ever obedient, he left her to it. “I’m here because I’m a fan,” she said. Someone clapped, and I thought, good for them.

There’s a lot of legitimate criticism of New Zealand’s involvement in the America’s Cup, sponsored as it is by our tax dollars. Supporters often point to studies that show Team New Zealand is capable of earning its keep, that it puts money into the economy and boosts New Zealand’s profile and reputation. Yet there are plenty of ways you can do that. Is this the best or only way?

We may never know, because the only thing worse than losing the America’s Cup, is winning it. Once you’ve won it, you’re obliged to defend it. There’s no quitting while you’re ahead. No skipping a season. Say you win the world cup: you take it home, admire it, and then line up with everyone else and try to win it again.

But if you win the America’s Cup, it slips into your grip like the rings of Sauron. And, like the rings, it becomes both yours and not yours. You sort of own it, and you sort of don’t. You sort of control it, and it sort of controls you. If it bestows any power, it’s only the power to keep on campaigning for it. If you win the America’s Cup, sooner or later a foreign syndicate turns up on your doorstep with a legal writ demanding their right to a challenge. It’s the highest stakes gambling table on Earth.

Aotearoa New Zealand is all about the sea. “A steak and a chop,” my mum used to say, referring to the coastlines of the North and South Islands. The sea defines our shape, and more. It separates us from over there. And to come from over there, someone had to get in a boat and cross an ocean. From Kupe to Cook, many of us are descended from people whose survival depended on their ability to sail and navigate.

Of course, the main reason you and I fund Team New Zealand is that no government can resist the hysteria we whip ourselves into every time the America’s Cup rolls around. We work ourselves into such a lather of wingwash, gybes and pre-start manoeuvres that no government in its right mind would say no. In other words, it’s fun. Glorious, extravagant, unconscionable: fun.

At least, if you like that kind of thing.

These blokes and other crew all wandered around, chatting with people and casually giving folks a grip of the stupendously large and ornate trophy. Eventually the auld mug, as they call it, ended up on a plinth on the speaker’s podium, getting rained on, as if ordained by fate. I wondered if anyone would drink the rainwater out of it. You never know. It was barely even seven am.

Slowly, the form of the boat slowly revealed itself to my sadly un-caffeinated eyes, and the whale analogy became stronger. The much-vaunted foil arms protruded – as promised – from the mid-ship bilges, much like pectoral fins. The rudder foil has little flanges where it attaches to the main rudder blade, looking for all the world like tail flukes.

There are curves and points in the most unexpected places. The main foils have little wing tips like fish fins, and presumably they’re almost as dextrous. All the trailing edges have curves and peaks. It’s surprisingly graceful. I always thought trailing edges should be straight like on aeroplane wings, so the water flows uniformly. Not so, said skipper Glenn Ashby when I asked him. “The cars we drive look different than they did ten years ago, and so do the yachts.” It’s glib, but he’s right. Such a boat never existed.

Most surprising of all is a sort of bulge running the length of the bilge, a bilge bulge, like an undercarriage. “Dolphin belly,” a journalist next to me called it, and good on him: I suspect that might stick. Being a lot heavier than the catamarans of the previous America’s Cup, it’s a harder boat to get onto its foils. So – as I understand it – the dolphin belly serves as a kind of smaller, secondary hull, minimising drag in that awkward phase between foiling and not foiling.

During those not-slow, not-fast times, “it’ll only be that bit in the water, and that part is far more like a multihull shape”, said designer Dan Bernasconi. “It’s like grinding through the gears on an 18 speed truck,” said Ashby, meaning that for every slight change in speed, there’s a corresponding change in drag, and a completely different sail shape needed. That’s his job: he’s the wing trimmer as well as the skipper.

Everyone was right about the whale. It’s even named after one: Te Aihe (although the name is nowhere visible on the hull, which seems odd). A presser arrived just now which included a proverb:

Which I believe means that in the same way that a dolphin laces the waves of the sea together, so does a leader lace people together. That’s a pretty simile, invoking a porpoise skipping through the waves, connecting them with the lacey wake from its tail flukes as it goes. And sure, all leaders should be so dainty. Certainly, Te Aihe will skip around quite a lot. It’s nothing if not volatile.

During the 2013 Cup, I was worried that Team New Zealand hadn’t capsized. In New Zealand, rich kids learn to sail partly by being made to capsize their sailing dinghies. If a boat’s capable of capsizing, then tipping it over may be the only way to really know its limits. Not that I’m wanting to cause any concern.

But one thing’s for sure: Team New Zealand has reinvented what boats are.