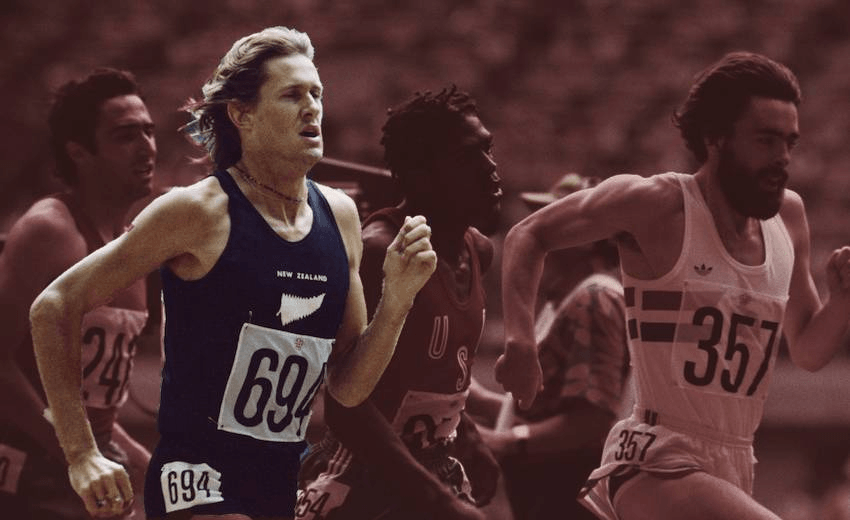 One of New Zealand’s greatest Olympic moments is also its most shameful.

John Walker’s arms are raised in triumph at the finish line. It’s 1976 and he’s just won the 1500m at the Olympics, something two New Zealanders have done before him; Jack Lovelock in 1936 and Peter Snell in 1964. Lovelock and Snell will be remembered for their wins, but Walker, and his photo finish, will go down as one of New Zealand’s proudest sporting moments.

Back home, New Zealanders celebrate as if they themselves have won Olympic gold. And in a way, they have. Because as Walker runs his winning race, his closest rival, world record holder Filbert Bayi is at his home in Tanzania, just one of over 300 athletes from 25 African countries that are boycotting the 1976 Montreal Olympics.

The sole reason for the boycott? New Zealand.

More specifically, the All Blacks.

Prior to 2011, rugby fans debated whether New Zealand had really won a World Cup. The All Blacks had won the inaugural tournament in 1987 but the win was always accompanied by an asterisk noting that South Africa didn’t compete that year. The understanding being that any global wins when countries are excluded, particularly for such political and moral reasons as apartheid, cannot be assessed alongside other events. It’s ironic, then, that New Zealand’s great Olympic triumph came as a near-direct result of our seeming inability to not play rugby against South Africa.

South Africa hadn’t competed in the Olympics since 1960, after being uninvited by the IOC due to its Apartheid policy. When they looked to reenter in 1968, 32 countries, largely African, threatened to boycott if South Africa were allowed to compete. In 1970, they were formally expelled from the IOC and there was a pretty strong consensus from all other countries that no one would make sporting contact with apartheid South Africa.

All other countries except New Zealand, apparently.

The All Blacks had toured South Africa in 1960 (with an all-white team, no less) but it was their 1976 tour, in the same month that South African police were shooting protesting black students in Soweto, that cemented New Zealand’s shameful place in sporting history.

As the All Blacks departed for South Africa, then prime minister Robert Muldoon appeared on television to give them his well wishes and personal blessing, and therefore the New Zealand government’s backing. New Zealand became one of very few countries in the world to support a connection with the apartheid nation.

There were protests in New Zealand (led by HART: Halt All Racist Tours) and opposition from over 20 African countries, but rugby is rugby, and the All Blacks continued with their tour. While they played their matches, insisting that it was just rugby and nothing political, the Organisation of African Union (OAU) met and decided that Africa would have to withdraw from the upcoming Olympic Games in Montreal due to the protests and the tour. The All Blacks still had two months left in their tour when the Olympics began, and their ongoing presence in South Africa exacerbated racial and political tensions in Montreal. The 28 African nations called on the IOC to ban New Zealand from competing given they had athletes in South Africa at the time, but the IOC refused.

Former IOC executive committee member Dr Sam Ramsamy, speaking in 2020, remembered negotiating with chairman of the NZOC Lance Cross days before the opening ceremony. “We said ‘look here, this is an ideal opportunity for you to withdraw [from South Africa]. We’ll get all the African countries back…This is an ideal excuse for you to leave South Africa simply because you can say that many of your athletes were caught in the riots and for that particular reason you need to come back.” Cross refused to take the message back to the New Zealand government and New Zealand Rugby, so the boycott remained in place and 25 countries departed the Olympic village, some mere hours before the opening ceremony.

In announcing Kenya’s inclusion in the boycott at the time, foreign minister James Osogo said by not banning New Zealand, the IOC would give “comfort and respectability to the South African racist regime and encourage it to continue to defy world opinion”.

The Games went ahead, though some events had to be rescheduled or cancelled due to the missing athletes. New Zealand ran a successful campaign, and even today the athletes from 1976 are applauded for performing with distinction “despite the undoubted additional pressure”. When the closing ceremony took place, it featured far fewer athletes than planned. On that same day, as 25 African countries completed their moral stand, the All Blacks played Transvaal in Johannesburg. They won 12 – 10, and played another 14 games before departing as scheduled on September 18.

John Walker won an Olympic 1500m gold. He was the favourite going in, perhaps even had the entire continent of Africa been present on the track, but he ran a race dictated by the morally unsound decisions and actions of New Zealand Rugby and the New Zealand government. Some have since argued that Filbert Bayi was sick with malaria at the time and wouldn’t have competed anyway, but that’s beside the point. The result is irrelevant.

Walker’s gold wasn’t the only medal gained courtesy of the boycott. Fellow runner Dick Quax won silver in the 5000m, a remarkable achievement. But Miruts Yifter of Ethiopia didn’t compete. Yifter won bronze in the 10,000m in Munich, 1972, skipped the 1976 Games because of the boycott, then won gold in the 5000m and the 10,000m at the Moscow Olympics four years later.

Walker, Quax, and every New Zealand athlete at the 1976 Olympics performed with distinction and deserved their accolades. But to ignore the context in which New Zealand won their oft-referenced medals is to show wilful ignorance of the impact the All Blacks tour had on global race relations and disharmony. The New Zealand Olympics website features an article headlined “New Zealand’s proud history in the 1500m”. There is no mention of the boycott.

Thanks to the likes of Valerie Adams, Emma Twigg and Lisa Carrington, New Zealand has plenty of options when it comes to proud Olympic moments. We no longer have to hold up John Walker’s 1976 gold as a moment of national pride, nor should we. In fact, use it to teach students just how much politics and sports do mix. At the very least, put an asterisk next to it.