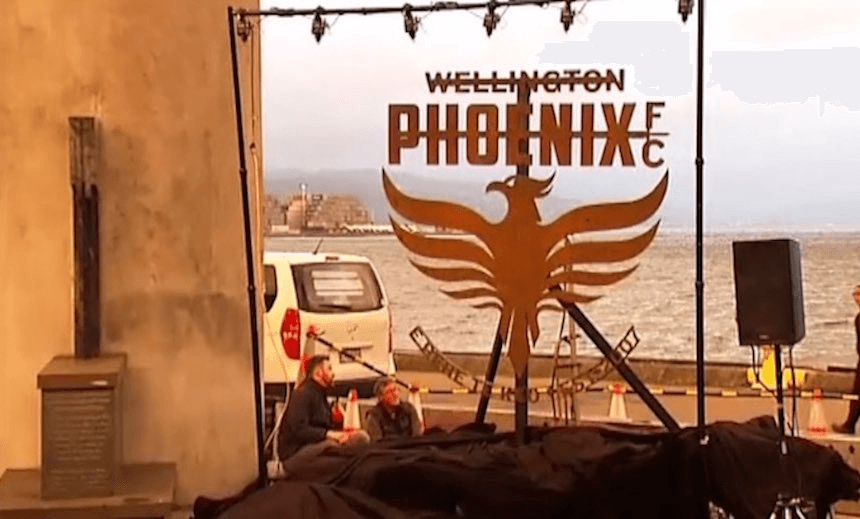 I am an early-morning commuter trying to get to work on time. I am not interested in looking at your new logo.

A-League soccer club Wellington Phoenix released their new logo at a waterfront ceremony this morning, unveiling it in the form of a large metal sculpture which was ignored by everyone who walked past it.

A 30 second video posted by Newshub captured the moment a large black sheet was dropped to reveal the logo, and kept filming as a pyrotechnician struggled to ignite a plume of flame behind it due to heavy wind, leaving the club wide open to attempted metaphors should they ‘fail to fire’ this season.

The new logo, released to coincide with the club’s ten year anniversary, includes a new inscription: ‘E Rere Te Keo’ (‘The Resounding Call‘ or ‘The Rising Call‘). “The club is both celebrating New Zealand’s genuine commitment to biculturalism, but also anchoring itself in a uniquely Wellington story that provides clear guidelines as to the culture and identity of the club moving forward,” reads part of a detailed explanation on the Phoenix website.

The new logo seems good. However that didn’t prevent it from being steadfastly ignored by the five Wellington pedestrians who passed behind it at the time of its unveiling. Their reluctance to engage is completely understandable – you can never be too safe, and for all they knew this could have been a Jono and Ben prank.

Still, here they are, ranked in order of how little they seem to care about Wellington Phoenix FC.

5. Man with bottle of water

Showed mild interest in the pyrotechnics (via basic human survival instincts) but not fussed about the logo. No strong feelings either way about Wellington Phoenix FC.

Going too fast to even register anything was going on. Spends all available leisure time cycling; doesn’t pay attention to Wellington Phoenix FC.

Impossible to know how he feels about Wellington Phoenix FC.

Refused to give the logo so much as a glimpse. Ambivalence bordering on pure hatred for Wellington Phoenix FC.

Could have had an exclusive sneak peek at the new logo before anyone else! Never averted his gaze from the footpath. Most likely theory: a soccer purist who actively shuns Wellington Phoenix FC in favour of more authentic ‘Team Welly’.