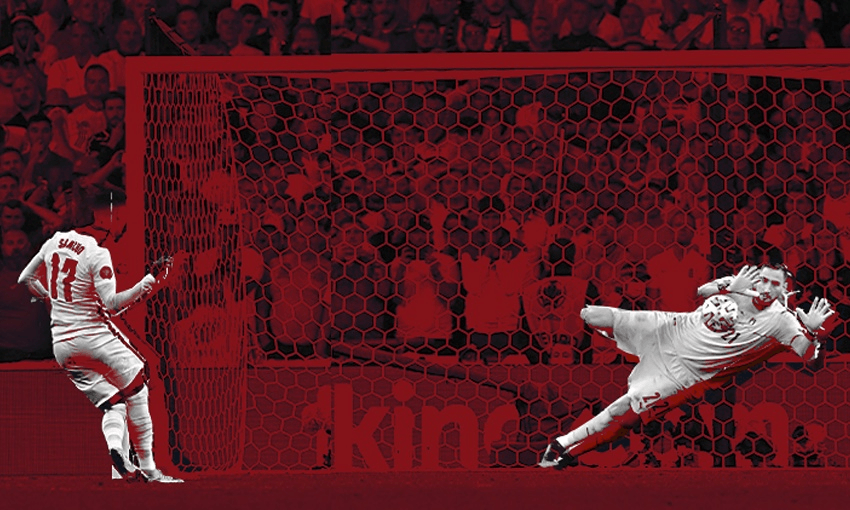 Abolish penalty shootouts once and for all

The Euro final between England and Italy highlighted just how inhumane penalty shootouts are. Get rid of them, argues James McOnie.

Penalty shootouts must be stopped. They’re inhumane and put too much pressure on young shoulders. I never liked watching them when I was 12 and still think they suck. To paraphrase the great Australian philosopher Geoff Toovey: it’s ridiculous. There’s got to be an investigation into this.

The latest example of this inhumanity emerged on Monday, as the tears of 19-year-old Bukayo Saka and other England players flowed following their loss to Italy in the Euro final at Wembley. It was tough to watch, and a stark reminder that every single big shootout ends like this. These penalty shootouts have a long list of victims, some of whom have forever been remembered as the person who missed. Current England coach Gareth Southgate is one of them. In Euro 96, his penalty in the semifinal against Germany was saved. It was at Wembley, where the fans had been singing that new song, Football’s Coming Home. After five successful penalties from England (and Germany), Southgate, a 25-year-old midfielder for Aston Villa, tried to place his shot. The German keeper Andreas Köpke guessed correctly. Southgate called his mum Barbara after the game. She reportedly said: “Why didn’t you just belt it?”

Look, it’s a fair question. But it was too late, Mrs Southgate! It’s always too late. The penalty shootout had claimed its victim, and it would claim many more. Two years later at the World Cup, England midfielder David Batty suffered a similar fate against Argentina. And these are only a few of the England scapegoats. Every nation, every club that’s lost a big penalty shootout has that player, or players. Remembered for the wrong reason. For missing. For “bottling it”. For not belting it (for what it’s worth, belting it isn’t always the answer).

The deplorable racist abuse towards the England players who missed penalties (or had them saved) against Italy on Monday showed the shootout drama that many people love has ugly consequences. While some contact sports scramble to update their rules to physically protect the brain from concussion, dementia and other diseases, what about protecting the brain from ongoing mental trauma caused by a hyper-stressful, isolating experience? Most brains know a penalty shootout is a ridiculous way to decide a contest, but for some reason it’s all we’ve got.

Watch any shootout. As the players walk up to take their kick, their faces range from distressed to physically ill to “I wish I’d chosen table tennis”. None of them smile like Damian McKenzie. It’s a format designed to cause excessive anguish and embarrassment to anyone who, God forbid, has their spot kick saved by a world-class 1.96m-tall highly athletic goalkeeper – with long arms and hands of steel – patrolling a 7.32m x 2.44m goal.

So, wouldn’t it be better to find an alternative? UEFA experimented with the golden goal rule in Euro 2000. The final was won by a David Trezeguet golden goal for France against Italy in extra-time. That was OK, but then penalties were still on the table if no goal was scored. In American soccer, they used to have the running penalty shootout where a player would dribble towards the keeper from 30 metres out. At least that was more of a contest, where the heroics outweighed any single player’s embarrassment. But it’s still not ideal.

The best solution might be the “drop-off”, like in touch rugby – where every two minutes in extra time, each team loses a player. Eventually the field opens up, and a golden try wins it. In football, the drop-off could happen every five minutes. It would encourage coaches to tactically sub on fast players, or for teams that lack speed to throw more players forward in regulation time. You could cap the drop-off to seven-a-side for the final 10 minutes of extra time.

In today’s world, there’s an emphasis on protecting mental health and safeguarding people’s emotional wellbeing. Surely a penalty shootout is unduly cruel and a recipe for ongoing mental trauma. One player, maybe more, will often carry the shame and blame for the rest of their lives. Some observers will argue: “Well, that’s sport”. But sport needs to be better than that. Sport needn’t be so cruel. Yes, sport can bring crushing disappointment, but for the actual laws of the game to offer up – without exception – a scapegoat who’s scarred for life, is too negative and flawed from the outset.

I’ve written to Fifa, imploring them to make the change. Specifically, I wrote to Sāmoan Kiwi Sarai Bareman, who is chief women’s football officer for the international federation — the most powerful woman in the world’s biggest sport. She’s based in Europe, but Sarai is from West Auckland, so there’s every chance I’ll see her at the fruit and veg shop on Lincoln Road at some stage, where I’ll argue my case in person.

Part of Fifa’s remit must be to protect the safety of those who participate in their sport, so with that in mind it would be easy to argue the merits of abolishing penalty shootouts. I’ve no doubt that a lot of fans around the world would welcome the change. Even though Italian fans watched their national team successfully navigate two shootouts in a row in the past week (and saw them win a World Cup in 2006 by the same method), I’m sure if the “map of Italy” was on the other foot, they’d want change too.

Change may take time. But imagine the 2023 Fifa Women’s World Cup in New Zealand and Australia with no penalty shootouts? Of course there’d still be heartache — only this time at acceptable and humane levels.