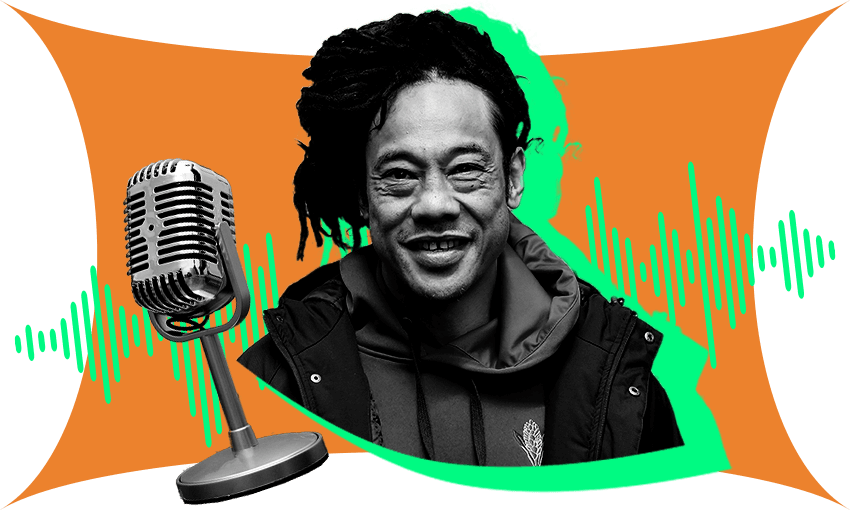 By Arizona Leger
Contributing writer
Made possible by

On his podcast Teem Talks, the All Blacks legend talks to people who inspired him during his rugby career. For long-time fan Arizona Leger, it’s an inspiring listen.

In my world, the word fa’alogo is one that connects me to my nana. Meaning “to listen” in Sāmoan, hearing her say “Arizona, fa’alogo mai” usually meant one of two things; I was either in trouble or I was in for a storytime, and I always hoped for the latter. It’s no coincidence that Tana Umaga carries the matai title, Fa’alogo – he knows how to listen, he is listened to, and he makes the most of both on his podcast Tana Umaga’s Teem Talks.

Fa’alogo Tana Umaga was my first ever interview. I was 18, fresh into my first year of university and Umaga had just signed Sonny Bill Williams to join the Counties Manukau Steelers for their 2014 season. I still have the voice memo on my phone labelled “OMG TANA UMAGA x SBW”. Listening back to it now, all I can think is “man, I really thought I was the shit”. Umaga, on the other hand, was respectful, answered professionally and helped me find my feet.

I’m sharing this memory so I can declare my bias from the outset. I am a true fan of the person that Umaga is beyond his sporting status. During his time at Counties, you could always count on three things: He would smile or say hello, he would ask you how you’ve been and he would always make sure you felt seen and valued as a member of the team.

In 2021, Umaga moved away from coaching to go all-in on Viktual+, the business he co-founded with his wife, Rochelle. Viktual+ is a wellbeing supplement range incorporating native ingredients and guided by indigenous values. Around the same time, he kicked off his new podcast. Teem Talks is a series of talanoa with people who inspired him throughout his career, specifically focussing on life outside of sport and his TEEM philosophy – Talent, Effort, Education and Motivation.

Being born into a sports family, I learned at a young age the control that sports and media can have over an athlete’s voice and story. I’ve always been curious about the story of the human beyond the athlete – not the typical rise-to-fame commercialised ad version, but the small details that your average post-match interview doesn’t make room for. The evolution of social media means we are now seeing more athletes start to break out of the traditional mould and become the author of their own stories. It’s refreshing, it’s inspiring and it’s well overdue.

I first listened to Teem Talks on my way to Hamilton to visit my grandparents. I’m not a huge podcast listener, but I was pleasantly surprised at how invested I became in the talanoa of the episode with former All Black Charles Piutau, who left New Zealand in 2015 at the age of 23 to pursue a professional rugby career in England. Umaga focused on the parts of Piutau’s story that are regularly overlooked by mainstream sports media. There was a sense of trust from Piutau that whatever he shared would be received safely by Umaga – this chemistry is what gives Teem Talks an edge in the wide field of sports podcasts.

The flow of the talanoa is heavily guided by Umaga’s innate ability to listen and respond. He has a presenting style that reminds me of my uncles, a distinct laugh and the urge to call every sportsman “uce” and sportswoman “sis”. It feels familiar.

One thing I would love to see the podcast transition towards is featuring sporting voices beyond those who Umaga met during his rugby career.  I understand the podcast’s original concept was to feature people he was inspired by during his time in rugby, but I’d love to hear from the people who will begin to inspire his next chapter too. Imagine a series of talanoa with women in rugby as we prepare to host the Rugby World Cup in Aotearoa this October? Now we’re talking.

If the first 22 episodes of Teem Talks are anything to go by, the next 22 have huge potential to elevate the podcast further into a field of its own. I’ll be the first to say I called it.