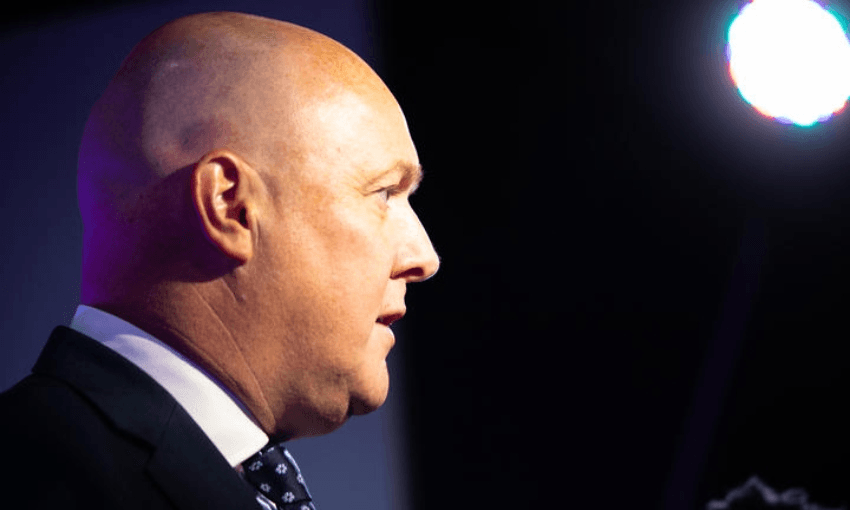 The Bulletin: Months of speculation about Christopher Luxon confirmed

So it’s official now: Former Air New Zealand boss Christopher Luxon has confirmed he will go for the National Party nomination in the Botany electorate. One News had the scoop, with Luxon telling them he was looking forward to the “robust democratic selection process” that awaits him from party members and voting delegates. It puts an end to months of speculation that he was going to do exactly what he has now announced he is going to do, so it’s fair to assume this has been a long time in the planning.

He has already secured the endorsement of former PM and current Air NZ board member Sir John Key. Having said that, current National MPs are probably less than thrilled about the prospect of a big new rival for the leadership, writes Richard Harman at Politik.

Winning the nomination is no sure thing. I wrote about this a while ago, questioning the idea that the local party will simply clear the way for him. He doesn’t live in the electorate (though says he has family ties to it) and will not have had time to do any sort of apprenticeship of party service. And other candidates will come forward as well – for example, the Times Online had the scoop of comparably obscure businessman Stephen Lyon putting his name in the hat.

The incumbent MP is in no mood to be prised out either. Independent MP Jami-Lee Ross put out a statement almost immediately afterwards, warning that he had been in close contact with the electorate over the year and vowing to fight hard. Over and above the widely reported matters that led to him being booted from National, he’ll have a very difficult job in convincing voters in one of the truest-bluest seats in the country not to simply vote for the official party nominee. The seat is certain to be closely followed in next year’s election, as will Luxon’s political fortunes if he wins it.

The apology tour of major New Zealand institutions having to eat crow in front of investigative journalist Nicky Hager has continued. This time, reports Radio NZ, it is the SIS who have been told to apologise to him, after illegally spying on him. They’re in the company of organisations like Westpac and the police, who have also recently issued apologies to Hager. One wonders if along with the apologies, they can also give back the years of Hager’s life spent fighting them in the courts.

Beneficiaries are being made to pay back money wrongly given out by MSD, even when it wasn’t the beneficiary’s fault. As One News reports, that is leading to fears that they’ll have nowhere to turn but loansharks. In some cases, people don’t even realise they’re racking up debt with MSD until it is too late. In related news (and continuing One News’ strong coverage of the sector) an experiment being conducted which used poor people to calculate the cost of food, and therefore how big food grants should be, has been abandoned.

The Māori Party wants to come back and have another crack in the 2020 election, and one person in particular is crucial to that effort. The NZ Herald’s (paywalled) Claire Trevett has profiled Che Wilson, the party president and a person with connections across the political spectrum. Some of the Māori electorates are still very much in play, despite Labour holding all of them at the moment, and it will be fascinating to see if the Māori Party can be revived.

Eight years on, the people and ecosystems around Tauranga Moana are still dealing with the Rena wreck. Te Ao Māori News reports it is particularly an issue around the Astrolabe Reef, “and sea life is yet to be spotted in the area.” It’s a devastating lesson in just how long term the damage of a major oil spill can be.

Major iwi Ngāpuhi has accepted the resignation of chair Rāniera ‘Sonny’ Tau, reports Waatea News. And from there it gets a bit mysterious – there are some unspecified ‘allegations’ floating around in news reports, but it’s not clear what they relate to or how serious they are. Tau won a huge margin in his bid for re-election to the chair role earlier in the year, but still struggled to build enough consensus within the iwi to push ahead with a treaty settlement – which has for a long time been an issue for Ngāpuhi.

What a massive few weeks this has been in the business of sports broadcasting. Spark Sport have just picked up the rights to domestic and international cricket played in New Zealand, analysed here by The Spinoff’s Duncan Greive, in an astonishing raid into the heart of the Sky Sport portfolio. The announcement came as a big surprise to many, and the Sky share price plunged on the news, going below $1 for the first time in the company’s history. As for Spark Sport itself, problems are still occasionally cropping up with their Rugby World Cup service, but they say they’re signing up new customers far quicker than disgruntled fans are leaving.

Finally, Hayden Donnell has come to the end of a long and arduous election campaign, with a wrap of all the bizarre stuff that went down that he didn’t have time to cover. Seriously, it has been a journey for him – you can go back and read all of our local elections coverage to get a sense of it. And all of it was funded by you, the readers, through The Spinoff Members, so a sincere thank you for that.

The Guardian has started running a major series on the disproportionate contribution fossil fuel companies have made to climate change. This particular piece that I’m sharing focuses on the similarly disproportionate contribution from the sector to climate science denial, in the same way tobacco companies tried to prevent the message that smoking kills from getting out. Here’s an excerpt about one particularly ugly incident.

Before the summit, individual independent climate experts found themselves subject to devastating attacks. Scientists at the University of East Anglia’s prestigious Climate Research Unit had their emails hacked. The contents of the emails were circulated, with the information they contained having been extracted in a way that suggested the scientists had manipulated their data. A police investigation failed to establish who the hackers were.

The rightwing media labelled it “climategate” and several thinktanks promoted the story enthusiastically. Multiple inquiries would later exonerate the scientists but by then the damage was done; the public’s faith in climate science had been measurably dented.

As you’re probably aware if you get push notifications on your phone, the rugby is off this weekend. There’s a funny cheat sheet about it on The Spinoff if not. Put simply, the typhoon is going to be an absolute monster of a storm. For the All Blacks, it means their qualification through to the quarterfinals is assured, so they’ve really dodged a bullet – had Italy beaten them while also gaining a bonus point, the All Blacks would have been knocked out.