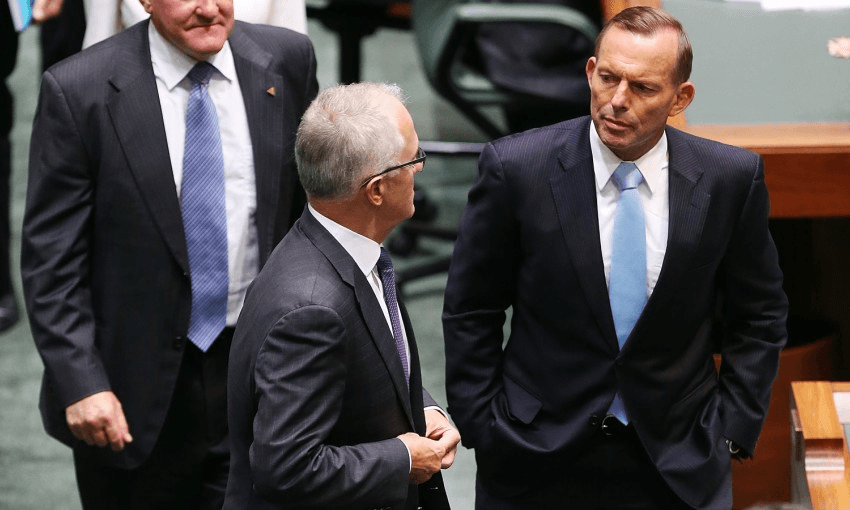 Behind closed doors, Australia asked New Zealand to keep a rejected offer to take refugees interred on Manus Island on the table, reports Newshub. The Australians wanted New Zealand as a backup option, in case a larger deal to relocated refugees to the USA fell through. The offer to take in 150 refugees has now been in place for five years, but has been rejected due to fears that people relocated to New Zealand would use it as a back door into Australia.

For a bit more context, immigration can be a very harsh battleground in Australian politics. The Guardian reports there is currently a battle going on over discussions of a cut of 20,000 immigrants a year – that’s about 10% of the total intake. Currently the leadership of Malcolm Turnbull is under threat, and as Melbourne Age chief political correspondent David Crowe says, it’s the arena in which the likes of former PM Tony Abbott thinks Turnbull is vulnerable.

“Australians should look on this cheap politics with dismay. The migration challenge is real. Abbott has a right to speak up. Yet the way the issue is exploited means it is all about the Coalition’s revenge drama rather than getting an outcome that matters to voters.”

And what about those at the centre of all of this? People are still being detained on Manus Island, with the most recent reporting from Radio NZ saying the refugees are still asking NZ to bypass Australia, and negotiate directly with Papua New Guinea. Their living conditions remain bare and dangerous, with one refugee being stabbed repeatedly with a screwdriver in an armed robbery just a few days ago. The ABC reports concerns that the level of medical care available to Manus refugees is “grossly inadequate.”

National has vowed to reverse the government’s decision to end offshore oil drilling, reports Stuff.Simon Bridges says the economy of regions with oil and gas activity will be hurt by the wider effect of the changes, and that more imports of fuel as the price rises will mean more dirty coal gets burned. It got hashed out in Question Time, where Paula Bennett went at Kelvin Davis, before they all got bogged down with points of order.

While the Greens are thrilled at the outcome, NZ First are not so positive, says the NZ Herald‘s Claire Trevett. Shane Jones will have to spend a lot of his provincial economic development fund in areas affected. He also turned himself into a meme at the press conference, with Newshub collecting photos of his impressively expressive facial reactions.

Do you go overseas to get your teeth fixed? Because of the high cost of dentistry in New Zealand, it’s becoming increasingly common for people to go to Thailand to get their teeth fixed. But as the ODT reports, dentists are increasingly concerned that they’re having to do a lot of remedial work on dental tourists. There were calls recently for more government subsidies for dental care, particularly because those on low incomes often couldn’t afford it, reports Radio NZ.

As per the latest release from Vector late last night, there were still more than 20,000 Auckland properties without power. Their response to the storm has been criticised by some, in particular over their phone app to show outages going down, reports Newshub. Vector’s head of networks, Minoru Frederiksens talked to The Spinoff‘s Don Rowe about just how major the storm was, and what is being done to restore power.

A shortage of dermatologists in Christchurch has raised concerns patients could miss out on life-saving treatments, reports Newstalk ZB. It comes amid wider concerns from Dermatological Society President Dr Paul Jarrett, who says there’s a chronic under-investment in the field across the country.

This is a really interesting Newsroom feature on the split between Air New Zealand and Virgin, what it means about their respective organisational cultures, and what it might mean for flights between NZ and Australia. Nikki Mandow writes that a major factor in the split, was simply that the two organisations just didn’t really get each other, and outlines why.

Right now on The Spinoff: What’s the deal with Auckland councillors moonlighting as West Auckland’s booze and gambling tsars? Rebecca Stevenson investigates. There’s an amazing guest post from singer Ladi6, who writes about losing her voice, surgery, and recovery for the first time. And an update to yesterday’s story about workers at the Grey Lynn supermarket going on strike – it got called off because management offered a progressive move to paying all workers across their chain of stores the living wage by May 2019.

And now, a guest post from TV and Gaming Editor Sam Brooks, who has highlighted some of the most influential and important pieces of gaming writing.

When I think of what is good video game writing, meaning good writing about video games and the culture around them, I go to three pieces. The first, and most essential piece, is Leigh Alexander’s definitive 2014 piece for Time ‘Sexism, Lies and Video Games: The Culture War Nobody is Winning.’ It summed up the source, danger and future of the #gamergate movement better than anybody else, and is written by someone who both knows and loves this industry.

The other essential piece is actually a series of videos by Anita Sarkeesian, under the Feminist Frequency brand, which garnered a lot of hate from the aforementioned #gamergate: Tropes vs. Women in Video Games. It’s a little bit basic at first, but it’s a detailed and nuanced examination of the treatment of women in video games, where it comes from and what it means.

And finally, to tout one of our own pieces, is an interview of That Dragon, Cancer maker Ryan Green by Tof Eklund, which delves into what it was like to make a game about their son’s terminal cancer, and what that game meant for audiences.

And in sport, it’s the last weekend of the Commonwealth Games, so if you’ve missed some or even all of the action, tune in now. The big upcoming highlights include the Hockey gold medal final, after the Black Sticks won a dramatic shootout against England to make the final – video on NZ Herald. That game will be on Saturday. The Sevens is also on this weekend, so if you’ve had enough diving and competitive walking and just want to see some sport you understand, try that.

New Zealand looks likely to settle in or around 6th place on the medal table. It’s about the same spot as 2014, but way up the 11th place from 2010. Australia are way ahead of the pack on the medal table, but as Stuff‘s Ian Anderson opines, there are far too many medals on offer for swimming sports, which Australia dominates. In my opinion there should be medals for ten different weight classes in Rugby Sevens – male and female. Though of course, we’d run the risk of being beaten by Fiji 20-odd times.

That’s it for the The Bulletin. If you liked what you read, and know other people who would find it useful, please forward it on and encourage them to sign up here. Thanks for joining us this morning, and have a lucky Friday the 13th.