Good morning and welcome to The Bulletin. In today’s edition: Why the lockdown is being lifted, last NZ troops to leave Afghanistan, and efforts to recover Pike River bodies come to an end.

We got the news yesterday that the alert levels will be shifting down to level two for Auckland, and level one for the rest of the country as of today. It came amid new cases in the cluster being announced, both connected to the student at Papatoetoe High School. To the best of our knowledge the spread has been contained. However, with new cases being announced, why was the shift made?

Part of the reason for the shift was because of that containment. The NZ Herald reports Dr Ashley Bloomfield described that as “reassuring”. PM Ardern also said there was encouraging data from both mass test results, and wastewater testing. Ardern said when unknown source cases appear in the community, the plan has always been to move quickly with alert levels. “However, it is also our plan to avoid using the alert level system to manage cases once we have a good handle on them.” She also thanked the Papatoetoe community for responding rapidly in trying circumstances.

But the announcement has been met with some consternation by experts. In reaction gathered by the Science Media Centre, Otago University professor Nick Wilson said it was “not cautious enough from my public health perspective, and also from an economic perspective given that regaining successful elimination is also best for the economy.” And professor Michael Baker said “I would feel much more comfortable with this Alert Level change if we used this opportunity to introduce a more sophisticated approach to managing Covid-19 containment.”

It’s fair enough to question whether this lockdown was necessary – after all, these are political choices as much as health choices. It’s also fair enough to say the answer was yes. Two pieces I think are especially worth reading on that. The first comes from (paywalled) NZ Herald science journo Jamie Morton, who has gathered comments from experts justifying the call, particularly in light of the risk that there had been a previously undetected super-spreader event. But for a balancing view, this is an excellent piece of analysis from Stuff’s Thomas Coughlan, about why decisions like this can’t be made on the basis of pure science alone – they have to be balanced by other considerations. He’s talking more specifically about border policy, but the thinking could be equally applied to questions like why the whole country didn’t move to level three, for example.

For those in Auckland, level two does not mean you should go out licking handrails, literally or metaphorically. Some restrictions will still apply, big events won’t be going ahead, and you need to be aware that there’s still potential for the virus to spread. Aucklanders are also being asked to “take their alert level with them” if they travel. Our live updates page has details on what the new alert levels mean. And for the rest of the country, think about this – when the cases were first announced, did you have peace of mind about being able to help contact tracers if needed? There’s probably going to be a next time.

Meanwhile, two other relevant pieces to read: Josie Adams outlines the strengths and weaknesses of saliva testing, and why it is better understood as a companion to nasal swabs, rather than a replacement. Siouxsie Wiles and Toby Morris write about why having very few cases can actually help scientists understand Covid-19 better. And Toby Manhire reports on exclusive new polling from Stickybeak that shows public support for the government’s approach to Covid-19 remains very high.

The last of New Zealand’s troops in Afghanistan will be withdrawn in May, reports the NZ Herald. It comes after two decades of military involvement, ten soldiers’ lives lost, allegations of involvement in war crimes, and about 3500 personnel cycling through deployments. The current military situation in the country is fraught, with the Taliban once again gaining ground against the western-backed government – though a peace process is underway which may result in the conflict finally coming to an end. More on that can be read in today’s features section.

All hope of recovering bodies from Pike River mine has now been lost, with the team coming to the end of its search. Stuff reports the searchers have now reached the roof-fall, more than two kilometres into the access tunnel, which is as far as they were going to go. Anna Osbourne, who lost her husband in the disaster, said she was proud of the work to get that far, “but it’s also hard to know that this is as far as we will go and that Milt [her husband] is still in there.” Work will now begin on gathering evidence required for the ongoing police investigation.

Over the course of this week, we’ve been doing our utmost to bring you all the coverage you need of the Covid-19 outbreak and lockdown. And we couldn’t have done it without the support of our members. If you want to help out our news team with this and other big stories, please sign up here.

Some interesting pieces about a rare upcoming listing on the sharemarket: My Food Bag is expected to be a pretty hot buy when it does list, but does it deserve the hype? The Spinoff’s Michael Andrew has outlined everything you need to know about the float. Business Desk’s (paywalled) Brian Gaynor has done a really crunchy analysis about what exactly underpins the offering. And on Radio NZ, there’s a report about the company’s chief executive having to walk back previous statements, after he asserted that the company would likely perform better than what their disclosure statements suggested.

A massive result for dairy farmers in the latest global dairy auction: The Country reports prices in the latest round rose 3% across the board, led by a 4.3% jump for whole milk powder – the key commodity for Fonterra’s farmgate milk price. Chief executive Miles Hurrell described it as both a great result, and ahead of what was expected.

A round of local by-election results has come in, with a few new councillors set to take office. Down in Invercargill, broadcaster Marcus Lush has stormed into a vacant seat with a huge majority, from his base in Bluff. Final results aren’t out in Palmerston North yet, but former refugee Orphee Mickalad looks set to win the seat vacated by new MP Tangi Utikere – his old history teacher, for the record. And in the Rangitīkei District, it appears a new councillor has won with the lowest turnout in New Zealand’s history. Ethan Griffiths from the Whanganui Chronicle reports that just 245 votes were needed to get Coral Ruakawa over the line in a contested by-election, with turnout sitting around 14%.

Good news if you were hoping to go to the Garden Party in Wellington – after the alert level move it is going ahead as planned. Presented by Verb and The Spinoff at the Botanic Gardens, there’ll be heaps of great chats, music and more. Check out our highlights post here. And on Saturday night join us for music and a drink and a few surprises at the Garden Party After Party. More info and tickets here. 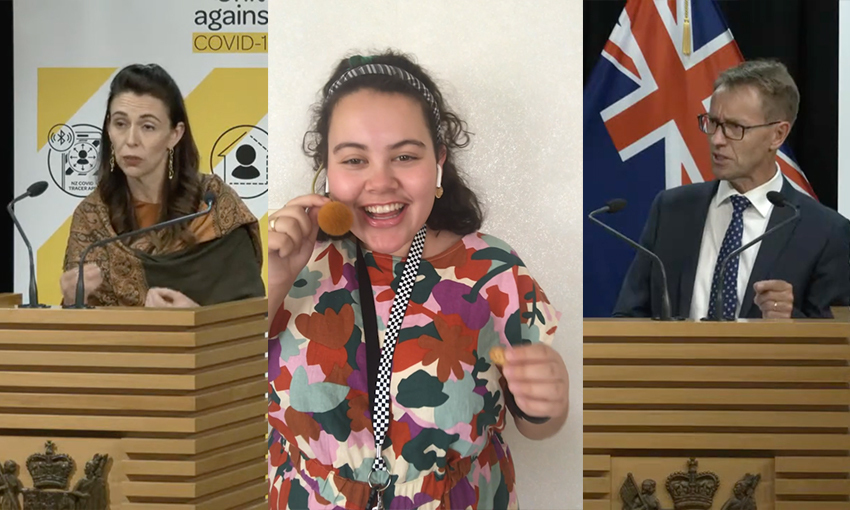 Right now on The Spinoff: Claire Breen writes about the children at the heart of the diplomatic row between Australia and New Zealand over the accused terrorist. Leonie Hayden outlines some deep and complicated thoughts on Pākehā people learning te reo Māori. Former corrections worker Chloe Blades reviews the new Jared Savage book Gangland. Experts on employment predict how Covid-19 will change the way we work and impact jobs in the future. Janaye Henry on video stage manages the latest Covid-19 press conference. And Tara Ward reports some massive news from the world of reality TV – the new Bachelor will be Sol3 Mio singer Moses Mackay.

For a feature today, a fairly damning piece about the convergence of the US defence industry and foreign policy. Responsible Statecraft reports that a Congressional study group has recommended that new president Joe Biden extend the deadline for withdrawing troops from Afghanistan – the longest war in the country’s history. But the report also points out that a huge share of members of that study group have current or former financial ties with the defence industry. Here’s an excerpt:

“This is a good example of the fox guarding the henhouse,” said Mandy Smithberger, director of the Center for Defense Information at the Project on Government Oversight. “One of the problems in our foreign policy making is that all of the advice is heavily dominated by people with financial stakes in continuing war.”

For example, Ret. Gen. Joseph F. Dunford was a co-chair of the Afghanistan Study Group. Dunford served as Chairman of the Joint Chiefs of Staff from 2015 to 2019, commandant of the Marine Corps, and Commander of all United States and NATO forces in Afghanistan in 2013.

He led the group alongside Kelly Ayotte, who represented New Hampshire in the Senate from 2011 to 2016, and Nancy Lindborg, the President and CEO of the David and Lucile Packard Foundation. Dunford and Ayotte have also used their expertise not just to advise the Biden administration on the Afghanistan War but to cash in with major defense contractors.

It seems almost tautological to say it at this point, but there’s more entitled brat behaviour going on with the America’s Cup. The latest round involves Challenger of Record Luna Rossa, who are insisting that racing restart on Friday despite Auckland still being at level two. That has caused serious tension with other teams, and the situation is well-covered in this opinion piece by Stuff’s David Long. He argues that Luna Rossa’s position ignores the country’s wider situation, and is an unsporting effort to take advantage of their current leading position.