The eighth in a series of polls by Stickybeak for The Spinoff shows popular sentiment remains strongly in favour of the NZ approach to the pandemic.

Ten days out from the anniversary of the day New Zealand reported its first positive case of Covid-19, with the first batch of vaccines set to be administered on the weekend and Auckland exiting its third virus-triggered lockdown, new polling by Stickybeak for The Spinoff shows public backing for the government’s response to the crisis undimmed.

Despite the leakages at the Pullman isolation hotel and the emergence on Sunday of new community cases in Auckland – the origin of which remains unknown – support for the overall government response is sky high, with 78% of respondents positive (don’t email me, mathematicians: the numbers in the chart below are rounded).

Presumably with half an eye on the devastation in parts of the world wrought by the coronavirus, well over half of the total, 59%, gave the government the top mark, excellent, in the nationally representative survey, which was conducted on Tuesday and Wednesday of this week.

That’s up from 75% the last time two times we polled, almost six months ago, amid the “Auckland August cluster” which led to several weeks at level three for New Zealand’s largest city and saw 179 positive cases recorded.

Here’s how the sentiment has changed over time … 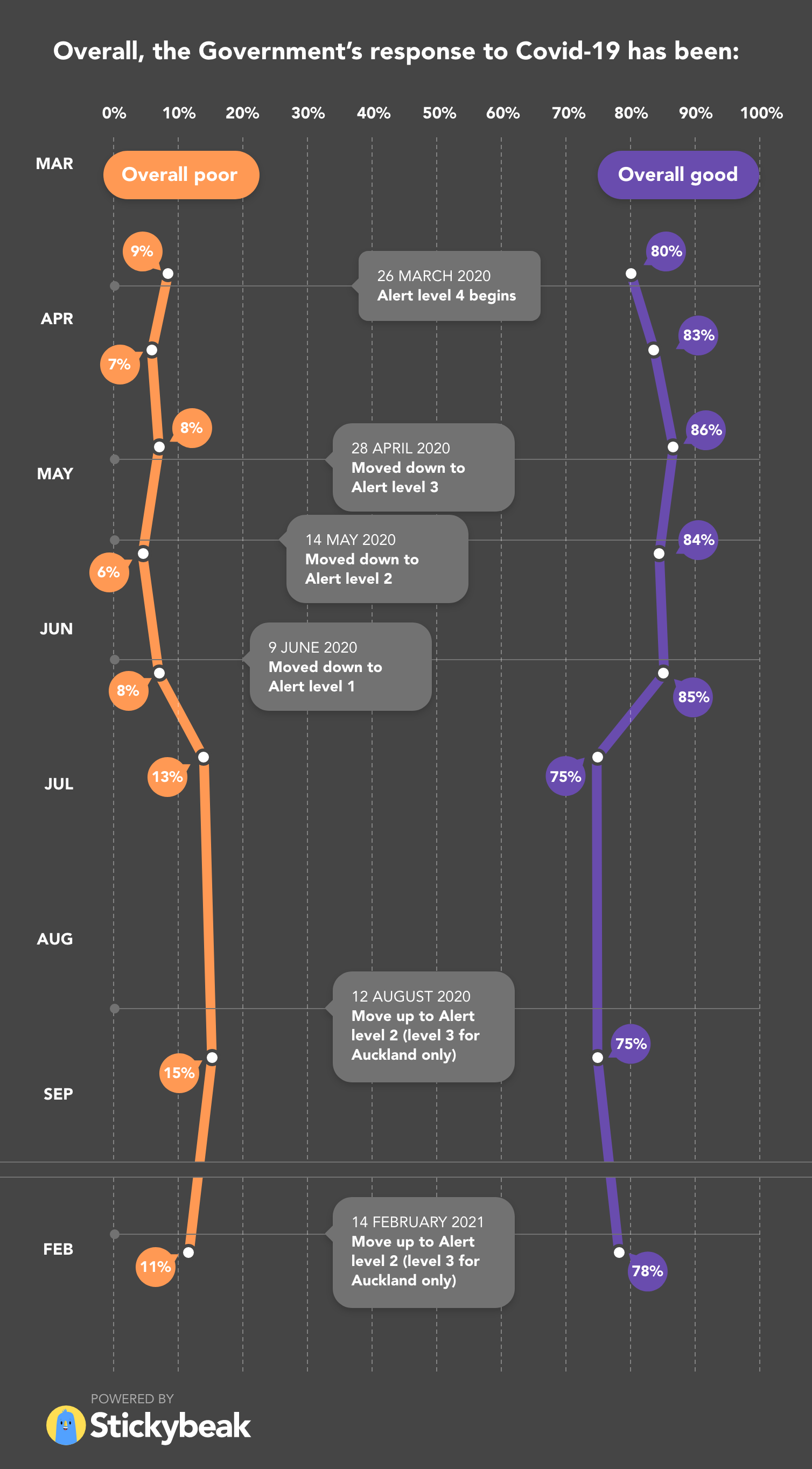 Again, with the outbreaks located in Auckland, the measures imposed in the region were tougher. We can break down the results to see how the level of support differs between those in Auckland and the rest of the country.

In a similar vein to our last poll, the support in Auckland was greater than the rest of the country, with 62% judging the overall response “excellent”. At the same time, slightly more Auckland respondents thought the response “terrible”. Perhaps because of the more pronounced impact of the outbreaks and the measures taken on the city, residents are likelier to have a strong view.

On Sunday evening the prime minister announced that Auckland would be placed in a level three lockdown, and the remainder of the country go into level two restrictions, for 72 hours as of midnight. First up, we asked: “how strongly do you support or oppose the decision to move Auckland to alert level three?”

Almost four in five backed the decision. Here’s how it breaks down, looking at nationwide, Auckland and outside-Auckland.

And what of the rest of the country moving to level two? Views here were less overwhelmingly supportive, at 68%, but broadly uniform according to the respondents’ region.

We’ll have more from the poll, including views on the managed isolation and quarantine system and the imminent vaccination programme, in the coming days.

A total of n=601 sample was achieved of adults in New Zealand, with 208 of those in Auckland.

Flick is proud to sponsor the Spinoff’s Politics section.

He was ejected from MAFS NZ due to domestic violence charges. Now he wants to open a bar on K Rd

Meet the South Auckland women behind a healthy food revolution