Sorry for leading off with such naked clickbait today, but we’re talking about inflation stats. The famously dry figures generally pass without much of a murmur, but the latest round points at a significant story for the state of the economy right now, and the costs people are facing to live in it.

So, the headline figures: Inflation is up 0.8% for the quarter, and 1.5% for the year overall, reports the NZ Herald. Inflation is basically a measure of how much the price of stuff has changed over a period of time. Within that, there was an interesting bit of movement for petrol prices, which are way up over the quarter, but down over the year, reflecting the crash in demand that came during the biggest months of the pandemic. The price of building a house, and the cost of rent, has also gone up ahead of the wider trends.

And that’s part of the wider issue around inflation right now – it is hitting harder for people with less ability to pay for increased costs of living. The Council of Trade Unions put out an analysis of the wider figures, noting that big rises for essentials like groceries and early childhood education are being offset in the headline figures by falls in the prices of more discretionary spending, like on consumer electronics. “Today’s data supports other recent economic data – be it on unemployment, wage growth, or housing – that shows we have an uneven recovery from the economic impact of COVID-19,” said CTU economist Craig Renney.

Will these figures prompt any changes in approach from the Reserve Bank? Part of the central bank’s remit is to keep inflation within target levels of 1-3%. Radio NZ quoted ASB senior economist Mark Smith, who expects inflation to start rising more quickly from here. “We expect annual headline inflation to move above 2 percent for much of the rest of this year and next as a perfect storm of stretched capacity, supply bottlenecks, and higher costs flow through in consumer prices.” Having said that, he didn’t expect the RBNZ’s approach to change, because they’re also directed to maximise employment levels, and low interest rates tend to support that.

Sweeping reforms to the structure of the health system were announced yesterday, including an end to DHBs altogether. I’ve gone over the major parts of the announcement in this cheat sheet to get you up to speed. We’ve also collected the views of a range of people with a connection to the health system, to get more of an insider perspective. And finally, health policy expert Gabrielle Baker takes a give and take approach to the news that a Māori Health Authority will be established.

Perhaps unsurprisingly, changes proposed in the wake of a review into Wellington City Council don’t seem to have healed councillor tensions. Stuff’s Damien George reports mayor Andy Foster will be taking control of the process, which some of his colleagues argue cuts against the findings of that very same review. On the other hand, Foster said (probably rightly) that including all the councillors would have been a “shambles”.

An new expanded airport at Wānaka has been blocked after court action, reports Crux. The issue in question was whether Queenstown Airport could hold a long term lease over the Wānaka site, which had previously been granted by the Queenstown Lakes District Council. The plan had basically been to get commercial jet traffic into the airport, to increase the wider capacity of the region to handle big tourism flows. As One News reports, thousands of people in the area had opposed that.

The entire board of Museums Aotearoa – the governing board of the museum sector – has resigned over governance and management concerns. The story was broken by The Big Idea’s Mark Amery, and followed up by Stuff’s Andre Chumko. 2020 was a hugely difficult year for museums in any case, with long periods of closures. In this case, it appears that the cause of the resignation was “fundamental disagreements” between the board and the executive director.

Another few days of developments in the Sāmoa election: The Samoa Observer reports independant MP Tuala Tevaga Iosefo Ponifasio has opted to join the opposition FAST party. However, because of Sāmoa’s quota system setting a minimum number of female MPs, the ruling HRPP will be gaining an additional member. That leaves the two parties deadlocked again – this time on 26 seats each.

Some feedback on my contention yesterday that the Transmission Gully review had put the public-private partnership model “on notice”: Simon wrote in to question the premise of that, and argued that the process will continue to be broken. Here’s the key paragraphs of his email:

Anyone who puts a realistic price on their bid isn’t going to be chosen. It’s as simple as that. It is practically inevitable that every major project – no matter who is in power when it is approved – is going to come in late and over budget, simply because the signed off schedule and budget have to be bullshit or else it doesn’t get approved.

There will be some hand waving over Transmission Gully. National will make hay out of blaming Labour even though they bought it, and Labour will in turn blame National because they bought it, and neither party will get any real cheering from anyone outside their core voter base, and nothing will change, and the next big thing will blow its budget again just as surely as the sun rises in the morning. 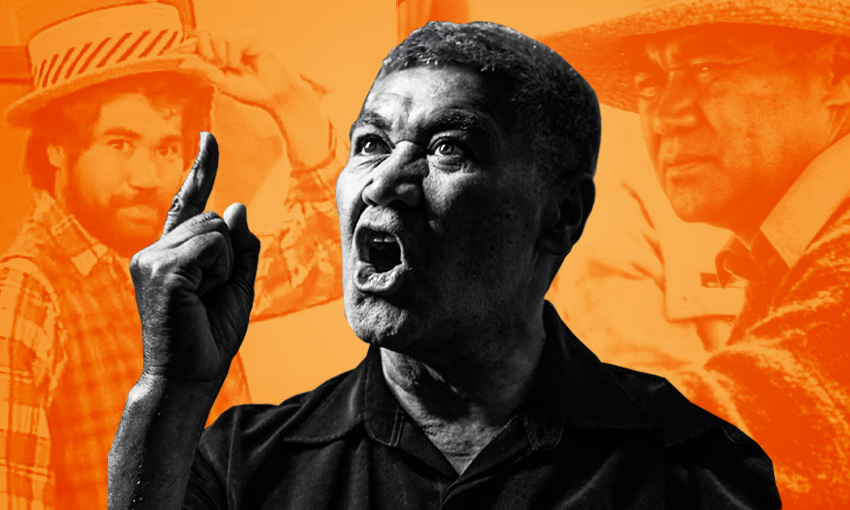 Right now on The Spinoff: We put out a survey asking Australians the immortal question of journalism in this country – what do you think of New Zealand? Vegas creator Michael Bennett responds to criticism aired earlier in the week of the show. Michael Andrew writes about a campaign to uplift the mana of small businesses. Sam Brooks speaks to arts legend Rawiri Paratene ahead of his retirement from the stage. Veils singer Finn Andrews takes part in our video series First, looking back at some of the early moments that shaped his music career. Alice Webb-Liddall does a tour of Australia without actually leaving the country. And Anke Richter writes about an alternative festival that decided to take a stand against conspiracy theorists.

For a feature today, an insightful read on the concept of ‘context collapse’, which happens an awful lot on social media platform Twitter. The Substack blog Galaxy Brain has looked at what happened when NZ journalist Elle Hunt offered an innocuous opinion about movies, which through the bizarre magic of trending algorithms ended up becoming the main story on the platform. Inevitably, a pile-on ensued. Here’s an excerpt:

I should pause here to note that this isn’t a dramatic story about unrelenting harassment that ruined a life. But it’s noteworthy precisely because it’s so familiar: a perfect example of our broken social media dynamics, which feel ever-increasingly designed to dehumanize us, polarize us, and make us all miserable.

When I spoke with Hunt recently, she was sanguine about the experience. She doesn’t want people to think she feels persecuted. “It feels wrong to even call what happened to me as harassment,” she said. “And yet when you look at the volume and frequency of how it comes in, it’s hard to talk about it as anything other than harassment. It’s just so many people engaging in bad faith — it just overwhelms you, and you start to see it as a reflection of who you are, and that’s really difficult.”

An incredible backdown from the wealthy club owners behind the European Super League concept. The BBC reports that not only have the six English teams withdrawn, collapsing the project in the process, but the owners of some of those clubs have even apologised to the fans. It may not be the end of the matter – some of the other clubs are hoping that punishments will be handed down to the six who tried to break away.

Meanwhile the draw for the Olympics football tournament has been released, and the men’s team might have a decent chance of advancing. Stuff’s Andrew Voerman reports they’ll face South Korea, Honduras and Romania – by no means bad sides, but avoiding some of the big guns. The women’s team could have a tougher time of it, drawing the USA, Sweden and Australia in their group. The selection rules for the men’s side of the tournament require a team to be largely under 24, with slots for three older players.