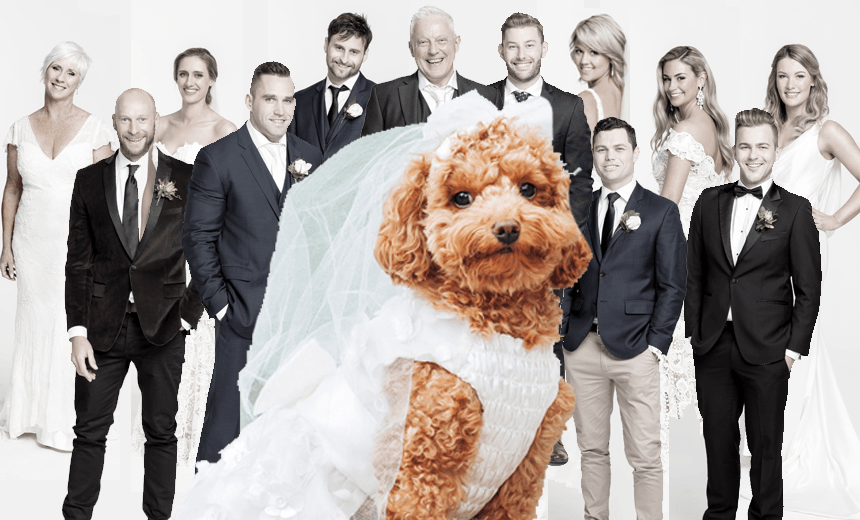 I crashed a Married at First Sight NZ wedding

With Married at First NZ beginning on Three tonight, Alex Casey recounts being in the room for the holy union of two complete strangers.

The weirdest thing about being a guest a Married at First Sight wedding, aside from the obvious, is that there’s no music during the ceremony to tell you what to do. There’s no way of knowing when to make that breathless turn to look at the glowing bride or groom, or knee-slide into the charming flash mob we’ve been working on in secret for weeks. “Just imagine your favourite Ed Sheeran song is playing in your head” the celebrant told us, barely audible above the howling coastal winds.

I was a part of a small wedding party perched on the edge of a cliff, bearing witness to the holy sacred union of two strangers for the television. Everything was top secret, we had to sign NDA forms and drive hours out of the city until our phones lost all service – at the time of writing I am still unable to identify anything about the happy couple that tied the knot that day. What I can tell you is that the bringing Married at First Sight to New Zealand is a “huge swing” for Mediaworks, as described by their Chief Content Officer Andrew Szusterman.

Using relationship experts – psychology lecturer Pani Farvid and relationship counsellor Tony Jones – to couple up strangers to become legally married, The Married at First Sight arrangement model is both romance reality television on steroids and a super traditional way of getting hitched across various cultures. As Pani would later explain to me at a media event, the irony wasn’t lost on her, “I’m a Middle Eastern woman arranging the marriage of Westerners… on television! In 2017!”

Back at the wedding, the guests were moving coyly around each other on the lawn, excitedly snapping group shots to file away for when the embargo lifts and they can flood their social media feeds. If it hadn’t been for all the TV cameras, and the Mums getting mic’d up, things might have felt normal. A crumpled home-wrapped wedding gift sat alone on a table above a bunch of sound gear. People were also pretty dressed up for 10 am, heels sinking into the wet grass and puffer jackets protecting the frocks from the cold ocean sting. “Nice to see you wore your best shoes” a guest jibed at what were, in my defence, my best sneakers.

It was time to take our seats, and I promptly grabbed a plastic chair at the back, praying I wouldn’t be on camera looking like a casual-shoe-wearing media slob on this special day of days. Behind us, I could make out the first brave contestant, pacing back and forth in the function room. Everyone gasped and turned around as they made their way down the aisle, their new forever love emerging from a flax bush to join them at the altar. As instructed, the first pangs of Ed Sheeran ‘Thinking Out Loud’ began in my head. I wasn’t crying, it was just a really windy day. Honest.

The good news is, the pair didn’t seem to know each other, even if multiple people in their wedding parties did. This is New Zealand after all, it wouldn’t be half as fun without the slight threat of marrying cousins hanging over the whole production. At the altar, both contestants were squirming, avoiding eye contact and instead staring into the middle distance like they had something more interesting and urgent to look at than their new spouse. Suddenly, everyone became a whispering body language expert. Look at those balled fists! Look at those darting eyes! That eyebrow raise! “Either they weren’t super keen… or just really nervous,” the celebrant told me later, in hushed tones over her marital steak, “it’s hard to tell.”

Some of you cynical folk out there might think this whole thing is a stitch-up, but expert Tony assured me, to use an old adage of The Bachelor NZ, that everyone who signed up to Married at First Sight is there for the right reasons. A lot of the contestants have washed up on the show after enduring the tumultuous seas of Tinder, and are plain exhausted with the modern dating game. “They’ve just come to us saying ‘please, someone, do it all for me’” Pani laughed. “You can’t really swipe people in real life, you see,” added Tony. Unlike the Australian version of the show, the New Zealand contestants are getting legally married, no cushy TV safety nets around these parts.

Any awkward afterglow of the swift wedding ceremony was interrupted by production immediately splitting up the couple and whisking them away to film their first impressions of each other. We filed into the reception room, where in-laws began making the first tense small talk of the rest of their lives. The newlyweds slunk in sheepishly soon after but immediately split like oil and water to work the room, the cameras and hawk-eyed guests following their every move. Could it be possible that they loathe each other already?

I watched as their sad wedding cake was wheeled to the top table. “Hoorah” it read. Guess we’ll soon see about that.