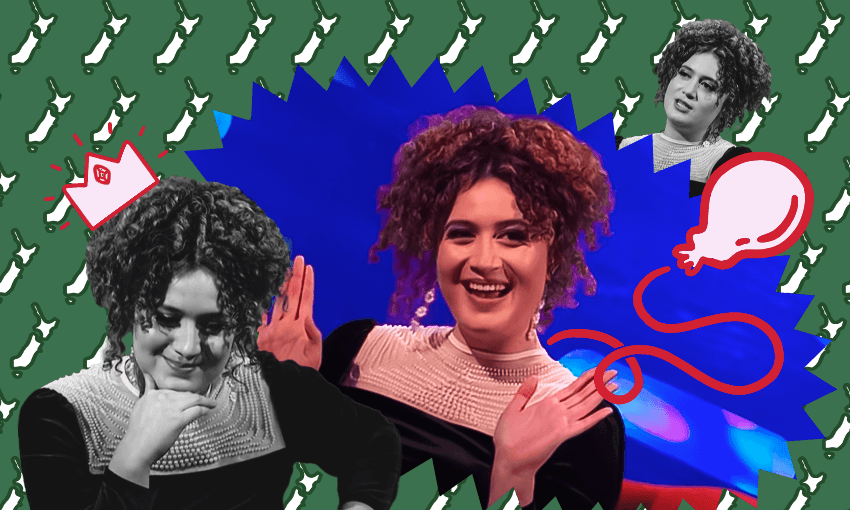 A lot of New Zealanders sit on Graham Norton’s big red chair. Just three have made it to the couch. Stewart Sowman-Lund honours the latest member of the exclusive club.

We’ve done it, New Zealand. One of our own has made it to the Graham Norton Show – and not just the big red chair (although, during these socially distanced times, the guests also sit on big red chairs).

Comedian, writer and actress Rose Matafeo has become just the third New Zealander to guest on the UK’s biggest talk show, joining a highly exclusive club that includes only Anna Paquin (in 2008) and Sam Neill (2016 and 2021).

Yup, it’s just a team of three. No Taika, no Lorde, no Phar Lap. Not even a pavlova or Briscoes Lady. And while Jacinda Ardern may love hanging out with Stephen Colbert, the prime minister has never made it to Norton’s illustrious couch. I’m counting Russell Crowe as an Australian, by the way, and am not open to discussion on the matter.

Twenty-nine-year-old Matafeo appeared on the show to promote her incredibly good BBC comedy Starstruck, which she stars in and co-wrote. The second season of the show, a loosely autobiographical story about a New Zealander in London (Matafeo) who starts a tentative relationship with an A-list celebrity, is on TVNZ OnDemand from February 16.

Of course, Matafeo was already an award-winning comedian before appearing on Norton’s show. But now, sitting side by side with the likes of acting royalty Kenneth Branagh and Line of Duty’s Vicky McClure, she has become a true New Zealand ambassador. Why? Because New Zealanders really love Graham Norton. His talk show airs during prime time every week (including at Christmas), we drink (and make) his wine, and we are lured to his big red chair in our masses. The show’s official YouTube channel has an 11 minute compilation of New Zealanders’ stories in the chair. We just can’t get enough of it!

So for a local to actually make it to the couch – that is the televisual equivalent of Lisa Carrington scoring another gold medal or the All Blacks winning a world cup. The Graham Norton stage is probably the second most viewed pedestal on New Zealand TV after the Beehive Theatrette at 1pm.

On the show, Matafeo seems fully aware of just how important her newfound platform is. “This is a very popular show in New Zealand,” she tells Norton, as though he doesn’t already know. “We’ve watched this for many years in New Zealand, we very much like it and we’re very happy for me to be representing our country.” Speaking on behalf of an entire nation is what international ambassadors have to do, and Matafeo nails it.

An ambassador also has to use their platform to help build global relationships and Matafeo uses her time on the telly to develop diplomatic ties with another celebrity, West Side Story breakout star Rachel Zegler. The pair make plans to go for a sausage roll at UK institution Greggs later on. “Greggs is a bakery for drunk people,” Matafeo explains. “We’re going after the show.” Our actual diplomats should take note: a late night sausage roll is clearly the best way to make friends.

As soon as the episode aired in the UK, Twitter was all over the two new besties, especially after Matafeo admitted she’d seen West Side Story twice (at the cinema, alone).

i need rachel zegler and rose matafeo to be best friends forever, thanks

Of course, no episode of Graham Norton is complete without a visit to the red chair. “We’ve had so many New Zealanders on the show, but they’re usually at the end of the show in the red chair,” jokes Norton during the episode. “Way to shit on my country!” replies Matafeo.

Shockingly, there’s a New Zealander sitting in it this week too. London-based Alice – who went to St Dominic’s College in Auckland – reckons she has “friends of friends” with Matafeo.

“Why is it always New Zealanders in the red chair?” wonders Matafeo, positing that it’s “because we experience the most messed up stuff.”

Sadly, Alice’s story of travelling through Vietnam is not messed up at all; it barely qualifies as an experience. She gets flipped and Matafeo, now realising the full burden of being a New Zealand ambassador, looks embarrassed.

“That story felt like it was happening in real time,” says Norton.

“You’re going to get that with a St Dom’s girl,” Matafeo says. “Poor Alice.”

The Graham Norton Show, with Rose Matafeo, airs tonight at 8.30pm on Three. Season two of Starstruck launches on February 16 on TVNZ2 and TVNZ OnDemand.