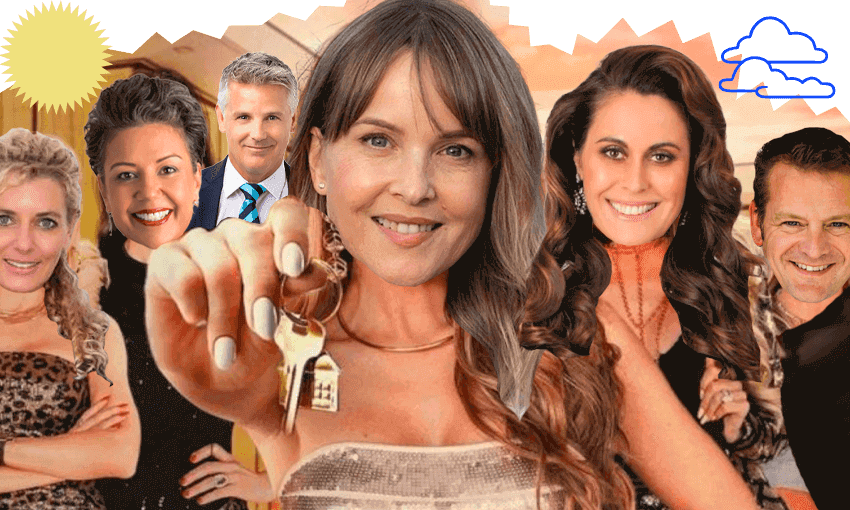 Which celeb real estate agents would star in a NZ version of Selling Sunset?

While we await a new season of the Netflix reality juggernaut, Alex Casey speaks to a celebrity realtor about the likelihood of a local spinoff.

I really hate how much I love Selling Sunset. Following the luxury realtors at Los Angeles boutique estate agency The Oppenheim Group, the reality series revels in the worst elements of extreme wealth and celebrity excess. The glamorous agents totter around building sites in Louboutins, hire zebras for their engagement parties and make million dollar commissions faster than you can type “discount lip filler near me” into Google. It is absolutely deplorable and, naturally, one of the most popular shows on Netflix.

While watching the latest season, I couldn’t help but ponder what a local version of Selling Sunset would look like. Aotearoa loves nothing more than making a funhouse mirror version of the big glitzy reality show of the moment and, with a swathe of celebrities getting into real estate here, the casting writes itself. Need an unusually likable villain? Paula Bennett is your Christine. A crafty home decorator like Amanza? Sally Ridge is right there. Two moguls from the same gene pool? May I present… Mike and Aaron Pero.

Unfortunately, former politician-turned-realtor Paula Bennett doesn’t watch Selling Sunset (she’s clearly too busy prepping for the return of Guns N Roses) and didn’t want to be interviewed about it. Former reality-host-turned-realtor Sally Ridge was keen to chat at first, but then didn’t return my calls. Former athlete-turned-reality-host-turned-realtor Jayne Kiely has watched the show, but said she would “prefer to get the job done without any fuss”. Both Shane Cortese and Rawdon Christie left me on read.

I finally managed to get my pitch to real estate agent and former Shortland Street star Angela Bloomfield (aka Chrishell), who is a huge Sunset nut. “I enjoy it in the sense that I don’t have to offer anything up, I can just zone out or – really naughtily – I can actually do emails while I watch,” she says. Bloomfield began her Selling Sunset journey while she was studying for her real estate papers two years ago. Was it research? “God no. It is so far-fetched it seems like fantasy land. It’s not a level of expenditure that I’ll ever be able to relate to. It’s basically just a ridiculous soap opera.”

The excesses of Selling Sunset, from the absurd $40 million mansions to the sloth-adorned baby showers, is not something Bloomfield can relate to easily. “When I watch it I am always thinking ‘this is not what real estate is’,” she says. “Fundamentally there’s the same story: you have a house, you take it to market and it goes into escrow – which sounds so much fancier than ‘unconditional’. But I don’t wear super high heels or short skirts, and I’m not pulling up in a Lamborghini.”

This is not to say that real estate agents in New Zealand struggle to earn a crust in the seventh most expensive country in the world to buy a house. I recalled a Selling Sunset episode featuring Karamo from Queer Eye, who visits a two million dollar house with a private waterfall, and how that house compared to this dilapidated Grey Lynn ‘do-up’ without a toilet that sold for the same price. “It’s quite incredible that you could spend that amount of money on a house here that needs work, but that in Hollywood will buy you this fitted-out house,” Bloomfield says.

“You’d think you can get a lot in New Zealand for two million, but sometimes not really – especially not in Auckland.”

It is exceptionally grim to think about the Selling Sunset drone drifting over that loo-less Grey Lynn pile of crud with a shiny multi-million dollar price tag graphic, but that’s not the only reason Bloomfield reckons a local version of Selling Sunset would be hard to make. “There’s a couple of girls in the office who are young and cute and they came to me and said ‘could we be in a Selling Sunset?’ But I don’t know. It is much less of a competitive environment here, it’s a bit more supportive,” she says.

Bloomfield does still think there is room for a local housing show that is “more fun and less TV1” than the likes of Grand Design, but would prefer something without the toxicity of Selling Sunset’s TMZ fodder.  Even when she watches The Block NZ, she admits she will fast forward to the room reveal and skip all the inter-team drama. “I actually really just dig the houses. I love looking at houses, and the ones on Selling Sunset are so extreme and beautiful,” she says.

But, if she did hypothetically get the call to film a local version, would the former soap star consider it? “I would have a long think about it,” she laughs. “And I’d have to talk to my agent.”

Selling Sunset is available to watch here on Netflix