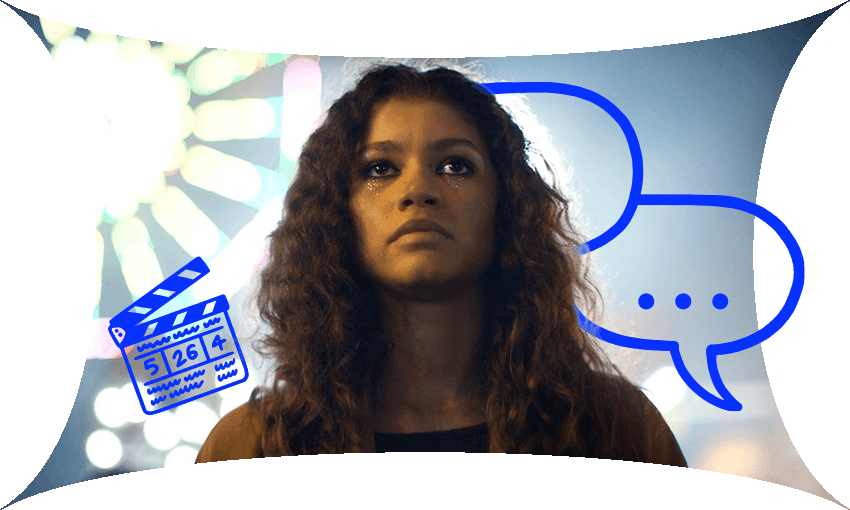 Sarah Helm, executive director of the NZ Drug Foundation, is one of many New Zealand fans of the US teen drama Euphoria. So how does she feel about the way it depicts drug use?

Contains spoilers for the season two finale of Euphoria.

This week, fans of the US TV drama Euphoria, me included, were glued to our screens for the agonising finale of season two. Hearts in mouths, we watched as lovable good/bad-boy Fezco saw his brother Ashtray be shot repeatedly by a team of armed police, and messed-up bad/good-boy Nate was driven by his raging internalised homophobia to confront his newly out father Cal.

All of this drama left Rue’s statement about staying “clean” for the rest of the year as something of a sidebar, a surprising turn given that her addiction issues have been the main storyline of much of the show so far.

Zendaya’s portrayal of the attractive and magnetic Rue – and arguably also Angus Cloud as Fezco, Dominic Fike as Elliot, and other characters – have led to accusations that Euphoria glamorises drug use. The trouble with these takes is that they miss the point that art often reflects reality – albeit, in Euphoria’s case, a distorted, hyper-real version. In the United States right now, thousands of Americans are dying each month due to an opioid epidemic that is spurred on by the inhumane and racist war on drugs, a poorly regulated pharmaceutical industry, a privatised health system, and more specifically, the drug fentanyl entering the black market. Powerful synthetic opioids like fentanyl, and its analogues, are causing alarming numbers of drug deaths in communities across North America and Europe.

And so in that context, it makes sense that a US TV show features a young lead character who forms an addiction to prescription pharmaceuticals and other illicitly acquired substances, and is then introduced to fentanyl. Still, this is drama, not documentary, and for all its attempts at verisimilitude, Euphoria can’t stop itself romanticising drug use at times. For those who understand the pain inflicted by fentanyl, perhaps the most disturbing line in the entire series so far is the one uttered by Rue in season one: “There is not a thing on planet Earth that compares to fentanyl,” she says, “except Jules.” It’s a good line but, to me, comparing the romantic and sexual allure of a character’s girlfriend to the devastating harms of opioid addiction crosses the line into glamourising drug use.

New Zealand audiences experience Rue’s storyline in a very different way to those watching in the US. These are not our stories. Thankfully, we haven’t had a fentanyl crisis here – although my colleagues and I live in fear of this possibility, as NZ is grossly under-prepared. Our support options here are very different to those portrayed in the series, including alcohol and other drug practitioners who work as part of school support teams.

One of my biggest issues with Euphoria’s depiction of drug use is the way it perpetuates some aspects of the failed war on drugs, using stigmatising language that New Zealanders are now used to hearing from American politicians and popular culture. While we empathise with Rue, we still hear that she is striving to be “clean”, implying that as a drug user she is “dirty” and that a pure body is the only acceptable state. In fact, many people who use treatment services chose to reduce their use of drugs rather than abstain forever. For some, this is an acceptable outcome and often results in drug harm being significantly reduced. For Rue, and some real-life drug users, abstinence is the only option. But this clean/dirty dichotomy, one of the many myths arising from the war on drugs, does not help anyone.

So what does Euphoria get really right on drug use? For one, the stories of both Rue and Fezco demonstrate an important truth: that underpinning the more harmful aspects of drug use can be trauma, parental loss and unmet social and health needs. Meanwhile, we see other characters consume drugs and alcohol with a range of impacts – from pure hedonistic pleasure, through to acute incidents and emergencies. The acute incidents are probably much more dramatic than most people’s real experiences, but even showing drug use without it automatically being linked to the myth of “one hit and you’re hooked” is progress.

If you’re a parent, should you be worried that your kids are watching Euphoria? To be honest, I’d have some concerns – fortunately, my own kids are too young to be interested. But our team at the Drug Foundation agree that the best solution isn’t banning your kids from watching the show, but having honest, open and calm ongoing conversations with them about drug use. After all, they will encounter other portrayals of drug use in television, social media and film, and likely encounter it in the real world too. Help them build critical thinking skills about what they see on screen – watch an episode with them, and ask them questions about what they saw, how that matches up with what they see in their real life, and what parts of the character’s behaviour they do or don’t like. One thing you should try to avoid is over-reacting, because then it’s clear you are not someone they can talk to about drug or alcohol use.