This morning at 6.01am, a thrilled John Campbell stood on a Hamilton train platform. It was the inaugural day of Te Huia, the new passenger train service between Hamilton and South Auckland, and train-lover John was ready to capture every glorious moment of this ground-breaking journey. “It’s a big old morning!” the Breakfast presenter told us. “We’re live from the train! Stay with us!” He’s taking this train all the way to Auckland (Screengrab: TVNZ)

It was indeed a big morning, especially if you’ve never seen or heard of a train before. John was one of the first passengers on the twice-daily, 90-minute service from Hamilton to Papakura, heralded as an important moment in New Zealand’s rail renaissance. “This is the birth of something,” John said, even though he knows Te Huia isn’t the perfect solution to our public transport woes. It’s slow, fuelled by diesel and doesn’t go directly to Auckland’s CBD, but heck. It’s still a train, live on breakfast television.

By 6.26am, John was aboard Te Huia and living his best life. “You’re in your happy place, aren’t you?” fellow Breakfast presenter Jenny-May Clarkson asked, and even though John was masked, you could tell he was beaming. He was an intrepid explorer, a brave soul about to go where millions of people had been before. “There’s people outside waving the train off,” he told us, as the camera panned across to an empty platform. 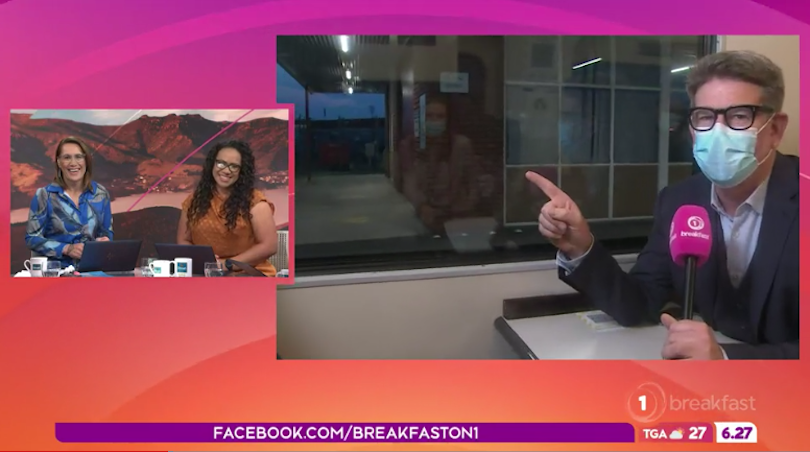 The train horn sounded, and John’s eyes lit up. “Oh, here we go,” he said. “We’re off!”. “That’s what happens,” Jenny-May replied, but she wasn’t there, she didn’t understand. Te Huia slowly inched forward towards Auckland, and John waved emphatically to strangers standing outside in the dark. He wouldn’t get off that train again until it reached Papakura. It was Auckland or bust, live on national television.

Back in the studio, Jenny-May discussed the trans-Tasman travel bubble, but John Campbell was in a travel bubble of his own. A trubble, if you will. “We’re passing through really lovely Waikato rural countryside,” he said at 6.50am, pointing out “a lovely farmhouse” and “rural roads”. Officially, he was having a lovely time. The train announced its arrival in Huntly, and John was momentarily speechless. “We’re pulling into Huntly! We’re here!” JC said, his face radiating with the purity of a man tasked with sitting on a train and simply enjoying the ride.

Indira read the news and Matty forecast the weather, but back in the real world John Campbell was riding the rails all the way to paradise. He was surrounded by passengers almost as enthusiastic as he was, like Waikato District mayor Allan Sanson and 10-year-old Abdullah, who had never been on a train before. “How cool is that?” John asked Abdullah, but we already knew the answer. It was cool, all right. John asked another child if he was enjoying his first time on a train. “It’s weird,” the child replied. John also chatted to KiwiRail CEO Greg Miller, and asked if a slow diesel commuter train was a win or not. Miller reckoned it was. “It’s the first step of many,” he said, but tell that to the seven-year-old who just told the entire country that trains are weird. After decades of underfunding of rail infrastructure, billions of dollars are now being chucked at trains, and look at the results. Express tracks! Government support for rolling stock! Increasing capacity exponentially! The carriage they were sitting in might have been first built in the 1970s, but this was 2021 levels of joy and jargon, and John Campbell couldn’t get enough. “There’s goats! Goats in South Auckland!” he cried as he neared his final destination, and Jenny-May told him he needed to get out more. Could Jenny-May see goats out her window? Unlikely. All she could see was Matty McLean’s weather broom, and by the time the eight o’clock news had finished, John’s feet were on back on solid Auckland ground. He’d seen incredible things in the past 90 minutes, like a train with three-quarters occupancy, an unimpressed child and random New Zealanders waving at him in hope of a better tomorrow. “This is it,” he said, and then wondered how the heck he was going to get home from Papakura.