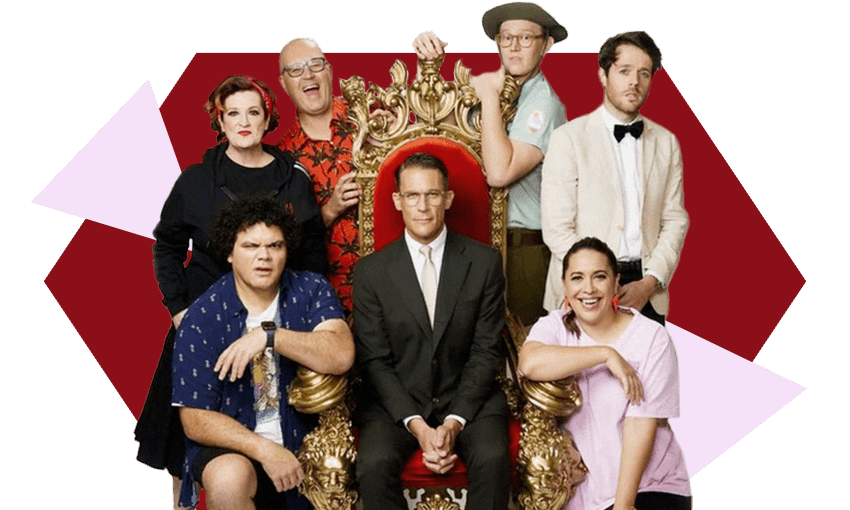 Meet the five local comedians taking to the caravan of challenges this year.

The third season of comedy panel game show Taskmaster NZ returns to TVNZ 2 tonight, and not a moment too soon. Taskmasker Jeremy Wells and his hapless assistant Paul Williams are back on their golden thrones to put five New Zealand comedians through a series of ridiculous and pointless challenges, just because they can. Taskmaster NZ is pure silly TV, and it’s exactly what we need right now.

Taking to the caravan of challenges for season three are Chris Parker, Josh Thomson, Justine Smith, Kura Forrester and Paul Ego – a cracking cast of comedy talent. Taskmaster is known for mixing generations, comedic styles and wacky tasks for maximum entertainment, and the first two New Zealand seasons were full of hilarious antics that made them as good as the UK original. Taskmaster NZ is the show that kept us going through lockdown, and gave us memorable moments like David Correros’ diss track fury and Urzila Carlson microwaving something.

Only one comedian can win the trophy of Jeremy Wells’ head, but all five of them will have a bloody good go. Here’s everything you need to know about Taskmaster NZ’s latest set of contestants.

Taskmaster NZ demands a diverse range of skills from its contestants, and if there’s one thing Chris Parker can do, it’s multitask. He’s a comedian, a craftsman, a museum exhibit, winner of New Zealand’s greatest reality show and a former mall Santa. No doubt he’ll bring the persistence that saw him claim the Celebrity Treasure Island crown, the joy that makes him an Instagram favourite and the style that will hopefully make walk shorts and socks cool again.

You might know Josh Thomson from panel shows like Have You Been Paying Attention? and 7 Days, or from Kiwi sitcom Good Grief, or from being one of the original hosts of The Project NZ. However, we must never forget Thomson’s finest television hour, when he won star baker on Celebrity Kiwi Bake Off for his turkey cake with a human head attached to its arse. Let’s cross our fondant fingers and toes that Thomson’s Taskmaster NZ experience is a similar mix of unbridled genius and absolute chaos.

A New Zealand comedy legend and the winner of numerous NZ Comedy Guild Awards, Justine Smith has popped up on our screens on The Project NZ, Raising Refugees and as the surprised mum in the Keep it Real online ad. Smith’s stand-up comedy career has taught her to stay cool under pressure, which will be useful when she has to smash a vase as dramatically as possible or be the fastest to eat the grape.

Maybe you know her as Shortland Street’s wacky receptionist Desi, maybe you remember her as the Eagle Boys pizza mascot. Either way, Kura Forrester has established herself as one of our brightest comedic talents, starring in shows like Educators, Golden Boys, and The Adventures of Suzy Boon. She won the Billy T Award for best emerging comedian in 2019, but will she take out the award for best portrait of the Taskmaster’s mother painted with an electric toothbrush? Only time will tell.

It’s Stickman, as we live and breathe. Paul Ego has been a team captain on 7 Days for yonks, but you’ll also recognise his voice from the classic Pak’NSave ads or The Rock radio’s Morning Rumble. The Billy T Award winner is a familiar face on panel show Have You Been Paying Attention? and will likely bring some Big Dad Energy to the panel. That’s exactly what we’re here for, New Zealand.

Taskmaster NZ screens Wednesdays at 8.45pm on TVNZ 2, and streams on TVNZ+.