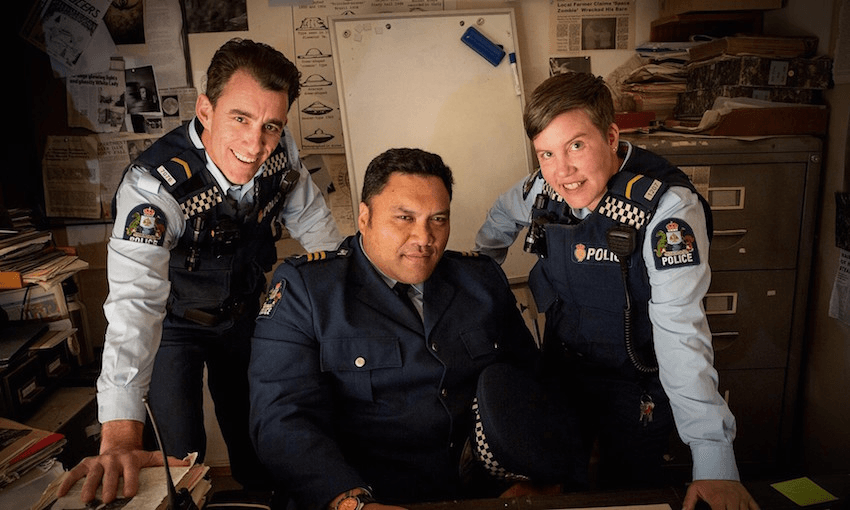 By Adam Goodall
Contributing Writer
Made possible by

Wellington Paranormal, the TV spinoff of Taika Waititi’s hit movie comedy What We Do In The Shadows, debuts on TVNZ tonight. So what’s it like?

There’s a bit in last week’s episode of Police Ten 7 where Officers Kevin and Bevan (I know) go looking for a rough sleeper who’s skipped a court date and now has a warrant out for his arrest. They find him sleeping in the back of an abandoned community hall and they wake him up to bring him in. The whole situation is sad, as these parts of Police Ten 7 often are – the police hovering over someone who’s been comprehensively failed by society as he packs himself up to get dragged through the system yet again.

There’s one bit of extremely weird moment of comedy, though, when Kevin and Bevan ask ‘Jack’ if he has anything on him that can hurt them. Jack says ‘no’, but host Rob Lemoto bellows in voiceover, “BUT JACK’S MEMORY OBVIOUSLY ISN’T THAT GOOD.” Cue thirty seconds of the officers pulling knife after knife out of Jack’s backpack, edited like a sight gag in Brooklyn Nine-Nine. “I don’t wanna get stabbed by that,” Kevin says without inflection, holding a particularly small and sharp knife. “I’ll just stash that in here, eh? Ta.”

The entirety of Wellington Paranormal’s first episode plays like that moment in Police Ten 7 – escalating absurdity responded to with a heroic level of understatement. Spun off from their cult-classic home in Taika Waititi and Jemaine Clement’s What We Do In The Shadows, Officers Minogue and O’Leary are more deadpan, marginally more observant and off to a promising start, even if this debut doesn’t quite stick the landing.

The episode opens with Minogue and O’Leary bringing in a young girl who looks like she’s had a few too many: she’s vomiting everywhere and calling herself Bazu’aal of the Unholy Realm (“That’s a lot to come out of such a small person,” O’Leary says, in the first of many understatements). They chalk it up to drunkenness, but their commanding officer Sergeant Maaka takes them aside and tells them to think again. There’s been a rise in paranormal incidents around town, of which Bazu’aal’s the latest, and Sergeant Maaka brings them on as the second and third officers in the Wellington Police’s new Paranormal unit.

It’s not five seconds before they’ve botched up the unit’s first official case. Bazu’aal breaks out of Wellington Police HQ and runs rings around them for the rest of the half hour, bouncing from body to body and taunting them about summoning hell on earth and sleeping with their mums. Maaka, Minogue and O’Leary are three steps behind almost every step of the way, sometimes literally – the demon’s jumped across the girl’s two parents into a scruffy terrier before they’ve worked out its powers. They’re either confused or totally out of their depth: when Minogue asks O’Leary to intimidate Bazu’aal with her ‘bad cop routine’, O’Leary gets in close to the possessed girl and deadpans “Stop that. It’s a bit scary.”

Wellington Paranormal loses its footing a bit in the climax – it’s cluttered, clumsily blocked and anticlimactic, over before it can build any tension or get the adrenaline pumping. The show’s Monster of the Week shenanigans fizzle out; the episode wraps up almost immediately after with the minimum of fuss. It doesn’t feel big or momentous, which is consistent with the show’s unflashy style but still feels like a bit of a letdown once the credits start rolling.

All three performers are note-perfect, though, and they carry us well through those rougher patches. Maaka, Minogue and O’Leary are played by namesakes Maaka Pohatu (Two Little Boys), Mike Minogue and Karen O’Leary (both Shadows alumni). They’re practically facsimiles of real New Zealand cops, at least as our cops like to present themselves on social media and in Police Ten 7 (and Border Patrol, and Motorway Patrol, and Highway Cops, and Dog Squad, and Coastwatch): muted, monotone, calm Kiwi heads in intense situations. They only break persona to take some small pleasure in the exciting parts of their job. Driving to an urgent call across town, Minogue checks in with O’Leary: “I might go a bit faster, if that’s alright.” She gives him the okay, he puts his foot down and a goofy grin dances across his face.

(I just want to add, because I really want to highlight this and have no other place to do it, that Pohatu is the MVP. He’s stoic and dedicated to the unit he’s built, even though he lacks the guile to be solely responsible for policing the apocalypse. Pohatu, who’s a founding member of the Modern Māori Quartet and a wonderful theatre actor, more than deserves a global break-out, and I hope this gives him one.)

Shows like Police Ten 7 and Dog Squad have helped turn that affectless monotone into a ‘quintessentially Kiwi’ characteristic, but that image serves another purpose: it makes the police look like they have zen-like levels of patience, especially when dealing with disrespect and aggression. That’s not to say these officers aren’t like that in real life; really, it means that we only see the situations that back up that image. We don’t see the cops who beat up protestors or cover up sexual assaults. These shows are designed to make the cops look good, even heroic, because of course they are: they’re negotiated, they’re edited, they’re PR broadcast every Thursday night on TV2.

Wellington Paranormal isn’t radical counter-programming, but it does take the piss out of that public myth-building project by turning it on its head. Maaka, Minogue and O’Leary are decent folk, but their monotones hide that they have no fucking clue what’s going on. The pisstaking is what makes Wellington Paranormal such a low-key joy. It’s not just a goofy send-up of Ten 7-style cop docos anchored by three warm, gormless performances. It’s a deeply funny deflation of a gormless Kiwi ego that looks like indifference and sounds like a monotone.