It’s rude to point, unless your name is Mike Pero. As CEO of reality series The Apprentice Aotearoa, Pero’s “you’re fired” stare-and-point movement is arguably the most anticipated part of every episode. It’s the crucial moment when Pero sends a contestant home, banishing them from the boardroom with a single elongation of his right arm. He also says words, but they’re not important. First rule of business: always let your finger do the talking. 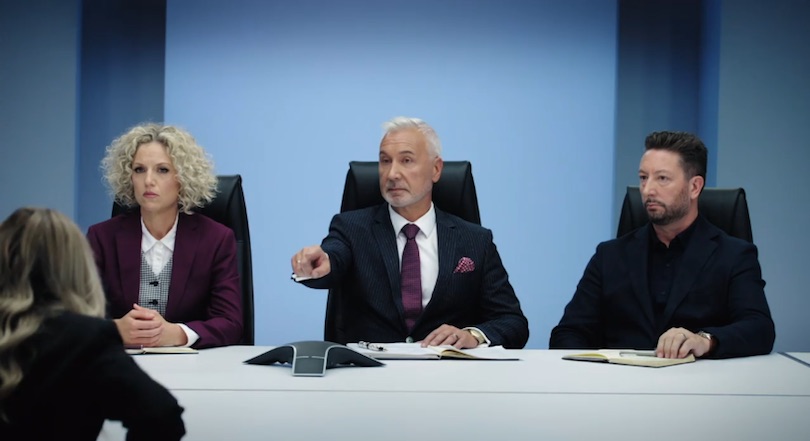 The Point is a simple gesture, but one that radiates power and authority. It begins with the forward propulsion of the arm, gains intensity with the flex of the wrist and climaxes with a jab from the digit of doom. Hopes and dreams are shattered with one socially distanced poke. You didn’t sell enough gelato, you suck at mowing lawns, you couldn’t convince the old people they had a nice day out. Poke. Poke. Poke. There’s no trigger on this finger gun, but it hurts all the same.

Point stans The Real Pod recently scored the scoop of the century from The Apprentice Aotearoa adviser Cassie Roma, who revealed a great deal of thought goes into The Point. “First thing first: it’s a new point every week,” said Roma. “The first week we were asking ‘do we bring it over the top with the point, or do we do a rainbow arc? Do you use your elbow and pivot down?’” Technique is key, and Pero needs to get it right. A true pressure point, if you will.

The effort is appreciated, the method adored. We’ve collated every glorious pointy moment from The Apprentice Aotearoa and ranked them from worst to best. Pointing never goes out of fashion, and Pero knows it. His tie always matches his pocket hanky, but his point goes with everything.

An unremarkable effort from our pointy friend, possibly due to the intense emotions in the boardroom. Pero’s wrist made a sterling effort but Pero was too busy accentuating the “you’re” in “you’re fired” to notice. This point should have fired itself.

9) The Double Down (episode seven)

Not one, but two disappointing efforts. A double eviction in this episode saw Pero unleash two firings, but, sadly, double the point doesn’t mean double the pleasure. In the immortal words of contestant Mike, this is a moot point.

A good point, though small on scale. Pero’s index finger was in position early, which is an admirable level of commitment and the sort of big sky thinking that gets businessmen into space.

Pero’s decision to send Olivia home was “easier than it should have been”, and this point reeks of his displeasure. He merely lifts his hand off the table, his upper arm presumably too disgusted to participate. Heavy hangs the tricep that wears the crown.

Excellent forward movement, with extra marks for the cameo cufflink. Short, sharp and… to the point, Pero keeps his elbow bent throughout, a move that says “I’m too busy to fully extend my limbs”, but also “I love buttons”.

Mr CEO goes rogue, swinging his arm in such an unpredictable fashion that even the camera can’t keep up. Get a grip, Mike Pero! Settle down, Mike Pero! He’s so full of regret at sending competitor Kennedy home that his hand wafts around the screen like an entrepreneur’s summer robe in a soft zephyr breeze. Absolute scenes.

This was Pero’s first point to his right rather than his left, and if you stare at the screen long enough, you’ll note how excited his phalanges are. The strong wrist rules supreme here, but Pero also says “you are fired” instead of “you’re fired”, confirming once and for all that surprises are good for the economy.

2) The Guillotine (episode one)

The first Pero Point is a bold piece of performance art, and sets the pointy bar for the rest of the season. He might have peaked too soon, because almost nothing else matches the unharnessed energy we see in this emphatic movement, as the arm moves aggressively to cover 90 degrees in approximately 0.3 seconds. Also, there are too many hands here, so it’s just as well Pero’s arm guillotine is about to chop them all off. Bravo.

1) The Bird in Flight (episode three)

I just want to be part of your symphony, Mike Pero, and there’s no finer arrangement than episode three’s pointalicious example. Pero rests his elbow on his chair, pulls his hand back to his face and – wait for it – begins to point before he’s even moved his arm forward. The audacity! The heroism! It’s the perfect storm of fingers and finance. Call him Mike Pero, call him Mike Pointo, just stay out of the way of his finger.