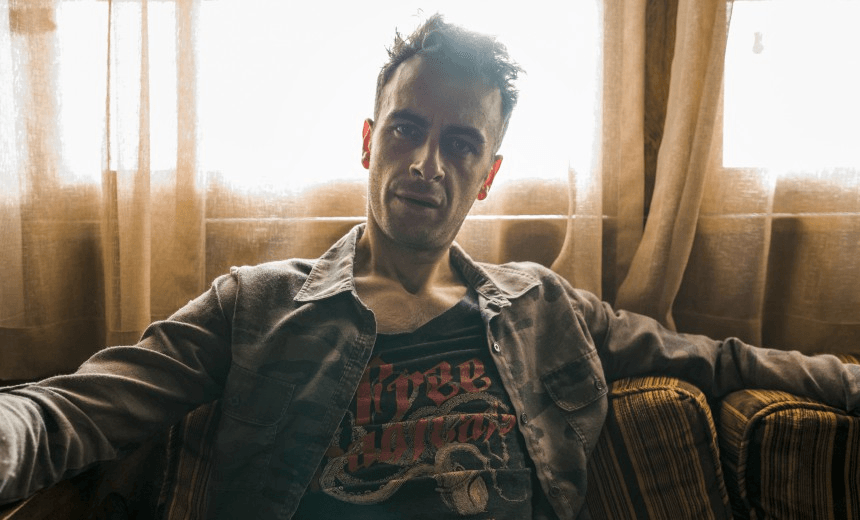 The Southern gothic comic book fable Preacher is back and exclusive to Lightbox. Dominic Corry sat down with Joseph Gilgun (Cassidy) to talk about acting anxieties, American money, and living the ganja dream.

Instantly recognisable to fans of Emmerdale, This Is England and the beloved cult series Misfits, English character actor Joseph Gilgun had been kicking around British film and TV for a while before securing his recent breakout role – that of Irish vampire Cassidy, one third of the triumvirate that drives acclaimed fantasy drama Preacher, which just entered its second season.

The Spinoff recently got the chance to speak to Gilgun between takes on the New Orleans set of Preacher. Frank and unguarded in a way that is rare among working TV actors, Gilgun’s wiry, energetic on-screen persona is easily matched by his hugely endearing in-person self. Try to imagine the answers being delivered in the Lancashire-born Gilgun’s northern accent.

Is it as much fun to play this character as it appears?

It’s ace yeah, I have a wonderful time. Being a drug addict vampire? Fooking sign me up, you know what I mean? I’ve been doing that for years, just without the vampire bit. So yeah, you’re gonna pay me to be a dickhead? I just have to say other people’s words. It’s wonderful.

Season two brings this show more in line with the comic books than season one. Has that helped?

It helps in the sense that, I remember there being a good chunk of fans that wanted to see this stuff, of course they wanted to, they’d read it, they want to see that. So it’ll stop them asking – I’m looking forward to that bit. But it doesn’t make it any easier.

Would you say you’ve settled into the role by now?

I’m ill with worry. I thought I’d be alright, I honestly did. I’ve never really done a series out here, this is my first sort of long term job in the States, so I’m still very naive to it all, or I feel that way. I remember people saying to me ‘Make the most of the first season because the second season you’ll spend just terrified that you’re not doing a good enough job’. The pressure of wanting to do well. We’re putting ourselves right out there. So the second season, I’m enjoying it, but I think if I didn’t have self doubt, if I didn’t do that thing where I beat myself up, I probably should throw the towel in.

What’s it like working with [co-creators] Seth Rogen and Evan Goldberg?

They’re amazing, man. I know we’re sort of expected [to say that]. They genuinely are really nice guys, like the nicest of guys, Seth in particular. I’ve really learned from Seth. I’ve got bipolar and every now and then I get a bit down in the dumps, get a bit confused and I have to chat to people to feel better. And I was telling this guy about Seth, and he was like ‘You should fooking watch ‘im, watch how he handles himself’. And I did and it has been fascinating. He doesn’t listen to the bad voices. We all have bad voices. We have good voices, we have bad voices, he just doesn’t listen to ’em. And if he gets told something he don’t wanna hear, he shrugs it off, just deals with it. They’re lovely. So yeah, it’s been wonderful working with him. ‘Cause your heroes generally are dicks aren’t they? Like, I liked Steven Seagal when I was young. Need I say anymore?

Do you ever miss Emmerdale?

I do miss Emmerdale yeah, because it was one of my first jobs. It was really popular in the north of the UK, where I’m from. And when I got that job, I was off the back of being a career criminal, so they were the first people who took me seriously as an actor so I do miss Emmerdale. I think about Emmerdale an awful lot. And I have a great deal of admiration and respect for those who do soap because of the turnover. It’s fast, and you have no time.

Does working on Preacher ever remind you of Emmerdale?

Working on Preacher is unlike anything else I’ve ever done. Everything about it. From just the budget, just having the money. I mean, fooking hell, my first day on the set in America, when they called lunch, I thought it was someone’s party. I was like ‘Is there something happening? Has someone got the all-clear like? Why are we having all this?’. It’s lunchtime. It’s like this every fooking day? It was unbelievable, there were like lobster and shit like that! I was like, ‘Why are the lobsters here?’ There are lobsters here because they have the fooking money and that was a big deal for me, man. I’ve spent nearly twenty years in the UK. I love and respect the way we film out there – we work hard, we do what we can with the budget we’re given, and we’re still brilliant at that, and it’s given me my career, the UK. I’m loyal to the UK. That being said, the budget out here, actually making real money for the first time in my career. Where I can go ‘There you go Mum, I can pay for that’. It’s just a fooking massive deal. You can’t comprehend it.

Why do you think American TV (especially Preacher) is so filled with British actors?

I think we’re cheap. Really I have no idea. I know that my job means the world to me, like most British actors. This kind of a thing is just a bit of a dream, really. It’s just something, you know there’s potential out there, I know I’m not a terrible actor, I know that I love the work that comes from America. And to be a young lad with my background, there’s not been a lot of hope there at times. So to be here at all is a miracle to me, I have to pinch myself that this is going on. To remind myself not become complacent with it. Excuse me, I’m slurring me speech, I’ve got a new strain of cannabis today and it is fooking me up. When I’m used to it, I can speak with ganja, but this new strain, it’s fooking done me in.

Has working on Preacher affected your personal views on religion?

Season two of Preacher is currently unfurling on Lightbox. Click below to catch up and new episodes are available every Tuesday.