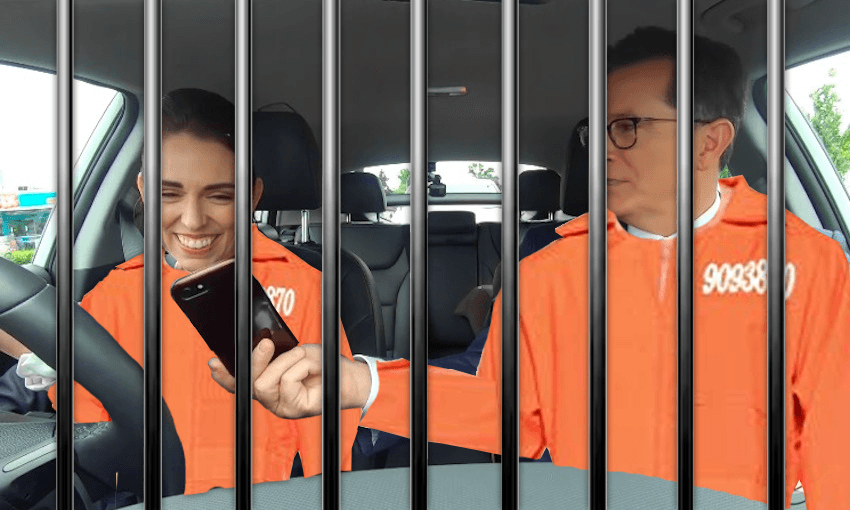 Don’t get sucked in by the jovial banter and the sausage sizzle with Jacinda Ardern. Stephen Colbert is an international criminal mastermind who must be stopped.

New Zealand is fizzing today with the exciting news that someone from another country has noticed that we exist. The Late Show with Stephen Colbert aired the first part of their week-long series exploring New Zealand last night. As you may recall, The Spinoff sent ripples around the world when it broke the news that the visit was under way after our investigative unit looked out the office window and saw Stephen Colbert and Jacinda Ardern standing around.

Airing yesterday on US television (and here on Prime) the first segment had it all. It had Lord of the Rings jokes, it had sausages and white bread, it had a brief flash of the iconic Triang trike, New Zealanders’ preferred mode of transportation. “This has to be one of the most cost-effective tourism promotions in New Zealand’s history,” tweeted political commentator Matthew Hooton. “Massive promotion of our country for close to free,” tweeted Auckland councillor Richard Hills.

Sorry to these men, but here’s the sinister truth. The segment isn’t good promotion for our country or our tourism industry, or our plastic trike industry. It is a brazen broadcast of illegal behaviour, infiltrating our screens under the guise of “comedy” and “entertainment” and “fun”. To quote true crime documentary Now You See Me, “come in close, because the more you think you see, the easier it’ll be to fool you.”

But I won’t be fooled. Here are the crimes.

When Ardern picks up Colbert from the airport, the car is very clearly parked on broken yellow lines. “You must not park or stop your vehicle on ‘no stopping’ lines (broken yellow lines) marked within 1 metre of the edge of the road” the NZTA website reads. Not only does the infringement warrant a $60 ticket under Rule 4 Schedule 1 Land Transport (Offences and Penalties) Regulations 1999, it also makes any insurance on the vehicle void in the case of damage – a huge risk considering Colbert’s criminally irresponsible approach to suitcase-loading. Go to jail.

Although Colbert can be seen wearing his seatbelt as Ardern leaves the airport in their getaway vehicle, he hasn’t put it on when she changes gears to pull away from the kerb. Perhaps not a criminal offence per se, but a clear breach of the rules as outlined in our national anthem ‘Make it Click’. “Click goes your seatbelt BEFORE you hit the track,” our Minister of Transport Ronald McDonald sings, not while ON the track. His punishment according to The Spinoff’s Crimes Act? Six months in those Grimace-shaped child jails from the 90s.

In an attempt to unlock Ardern’s iPhone using facial recognition technology, Colbert thrusts the rectangular device in front of her face multiple times while she drives in a high speed area. The NZTA advises that “anything that diverts a driver’s attention for more than two seconds can significantly increase the likelihood of a crash or near-crash.” It is also illegal to send and receive text messages while driving in New Zealand. Had one popped up on the phone while it was in front of her eyes, she could be facing an $80 fine and 20 demerit points. Colbert? Jail.

#FreeLorde: How Lorde’s songs warned us she was going to jail

‘Girlfriend, you are so on’: the curious Jacinda Ardern fixation in the US Democratic race

In the clip, Colbert can be seen making multiple attempts to hack into the prime minister’s phone. After several utterances of “no” from Ardern, elevating to a “definitely not”, Colbert begins soliciting key personal information in an attempt to guess her passcode. Eventually the device is locked for 60 seconds due to too many invalid attempts. According to the Crimes Act, any person who intentionally accesses any computer system without authorisation is liable to imprisonment for a term not exceeding two years. “Imprisonment”, Colbert, is another word for “jail”.

The pair laugh about stealing James Corden’s “Carpool Karaoke” segment, in which he sings along to the radio in a car with a famous person. But that’s not the copyright infringement our crime unit is worried about. After auto-enhancing the above image with our digital forensic team, there is enough evidence to suggest that Stephen Colbert is wearing a suit. If Colbert knew anything about New Zealand, he would know that wearing a suit is Willy Moon’s intellectual property, and that his artistically atrocious ass is going straight into the clink.

Within seconds of their sit-down interview beginning, Colbert commits another heinous crime. “My first question is: can I be a citizen?” he asks Ardern, later demanding that she make him President of New Zealand. Treason is defined in the Crimes Act as anyone who “incites or assists any person with force to invade New Zealand; or uses force for the purpose of overthrowing the Government of New Zealand.” Colbert adds to his sentence with a slow wink. The punishment for treason is life imprisonment.

That peanut brittle Colbert keeps offering? That’s clearly a bribe for the presidency. Also, did Colbert declare the snack at customs? All evidence points to absolutely not. According to section 105C of the Crimes Act, it is an offence to bribe a person in order to obtain or retain business or to gain an improper advantage. The maximum penalty for bribing an official is seven years imprisonment, and let’s chuck a few more on for breaking the Biosecurity Act 1993 for bringing in high risk peanut brittle and/or scary snake goods.

According to the Electoral Commission, other people can only promote a candidate or party with a written authorisation. “All election advertisements, irrespective of when they are published, must include the name and address of the person that has initiated or instigated them.” Failing to do so is an offence and subject to a fine of up to $40,000.

10) Consorting with a criminal

In the final barbecue scene, it is revealed that international superstar Lorde is also in attendance. Everyone knows that Lorde has been imprisoned for leaving school early and not fulfilling her high school education.

After a genial conversation with the fugitive, Colbert then offers her a tube of peanut brittle, which turns out to be a snake prank. We have no laws against pranking thanks to the Jono and Ben clause in the Crimes Act, but habitually consorting with convicted offenders will get you three years in person.

Lucky you like New Zealand so much, Colbert, because you are going to be going away for a very, very long time.