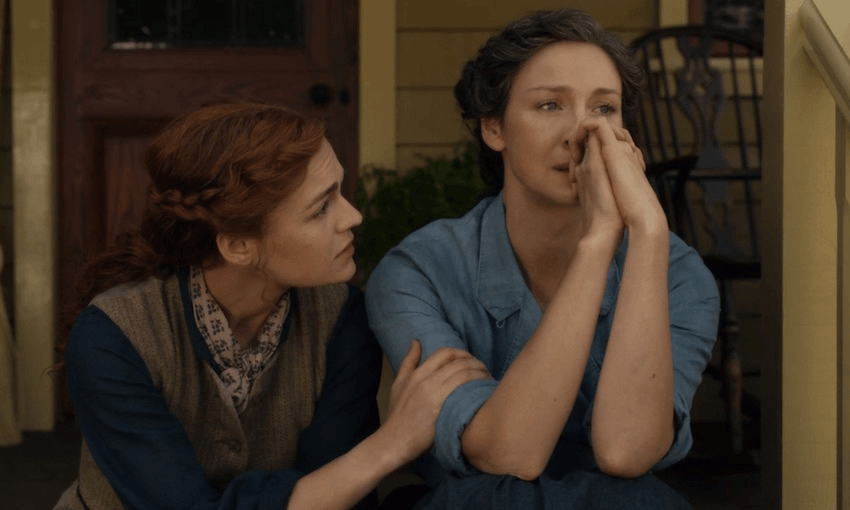 We have lived, loved and laughed our way through five seasons of our beloved Outlander, but after this week, we can finally claim to have seen it all. My heart beat outside my chest for most of episode nine, partly because Jamie Fraser was in a perilous state, but also because Fergus said more this week than he has all season. Bless his little French heart, and bless Claire’s healing powers of nakedness, because they saved our hero’s life when nothing else could.

That’s right. This week Jamie died, DIED I TELL YOU, but came back to life through the restorative sexy power of Team Fraser. Ashes to ashes, hornbag to hornbag, ours is not to question why. Ours is to say thank you, weird science, because whatever perfect storm of modern medicine and strange primal urges saved Jamie Fraser is fine by us.

Jamie Fraser has survived war, imprisonment, starvation and cave hair, but it was a snake bite that almost felled the mighty trunk from the ginger forest of life. It was the hunting trip from hell, and it was up to Roger to save the day. Poor Roger. He couldn’t find his way out of the forest, he couldn’t land a shot during the hunt, and his father in law didn’t respect him. Roger’s historical vacation is one disaster after another, and even if he did get to suck the venom out of Jamie Fraser’s thigh, the poor lamb must be reaching his limits.

While Jamie lay dying in the forest, Claire and Bree dyed everything they owned a lovely shade of indigo and wondered if the 18th century could handle a female engineer. After four weeks of lockdown, I am also considering dying everything I own, and then attacking my fringe like I’ve been living in a dark cabin with a herd of wild goats for a month. Again, ours is not to question why, but it’s fair to say that while Bree is struggling to find her purpose, I have finally found mine.

Roger may have also found his purpose, which is staying calm while everything turns to shit. He didn’t panic when Jamie grew sweaty and pale, and he didn’t stress when he couldn’t find help. In fact, he was more distressed in 1947 when the Reverend said he couldn’t eat any more chocolate biscuits. Roger fashioned a plank of leaves and twigs, plonked Jamie on it, and dragged his father in law through the forest until they were saved by Ian, Fergus and a complete random who came along for the ride.

It wasn’t looking good, especially for Jamie’s hair, which was giving off some lanky season four fringe vibes. Claire was so scared that she sent the entire population of North Carolina into the forest in search of maggots, because nothing brings the community together like a hectic search for fly larvae. Those writhing little feckers needed to chew on Jamie’s festering wound until his hair was full of sheen and his eyes sparkled like diamonds and everything was right with the world again.

Everyone talked about the maggots and we saw plenty of close-ups of the maggots, so it’s nice that Outlander still surprises us with fun things like flesh-eating worms in open wounds. Stephen Bonnet is also a maggot, and Jamie made Roger promise he would kill Bonnet to stop him taking Jemmy and seizing Jocasta’s fortune. It’s a big ask, but Roger had just sucked out poison from Jamie’s thigh, so swings and roundabouts, maggots and murder, everything’s fine.

His pulse was gone. There were no more steamy breaths. His hair had lost all of its bounce. Jamie Fraser had officially carked it, but Claire did not travel through time just to dye everything she owned blue and watch her husband die on her. She whipped off her nightie, pressed her naked body against his, and bish bosh bash, Jamie Fraser came back to life. No further questions, your honour, but if it was indeed the Fraser sexy factor that bought Jamie back from the brink, then someone needs to bottle that essence ASAP and do the world a favour.

Claire deserves a medal, as does Bree, who realised that snake fangs can be turned into syringes to inject home-grown penicillin into your father’s bloodstream so your mother doesn’t have to chop off his putrid leg with a hacksaw. Marsali gave birth in the forest, Bree was catapulted into the air by a buffalo and didn’t even bruise, and Jamie Fraser lived because of his wife’s healing powers of nakedness. Best of all, there are new blue clothes for everyone. Never change, Outlander.