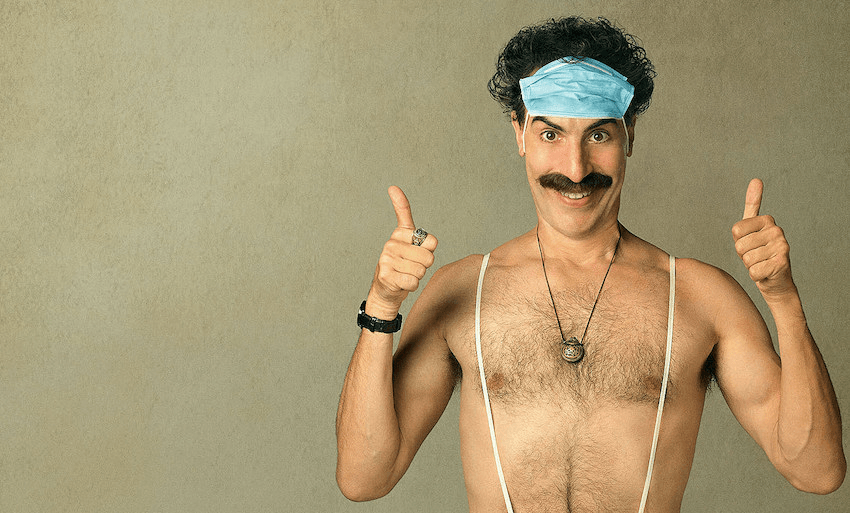 A promo image for Borat Subsequent Moviefilm: Delivery of Prodigious Bribe to American Regime for Make Benefit Once Glorious Nation of Kazakhstan (supplied)

Review: Borat Sagdiyev is back, but is it as funny now we know the punchline?

A promo image for Borat Subsequent Moviefilm: Delivery of Prodigious Bribe to American Regime for Make Benefit Once Glorious Nation of Kazakhstan (supplied)

Sacha Baron-Cohen’s most successful character returns to a pandemic-stricken middle America. The formula is the same, but its impact has radically changed, says Duncan Greive.

In Borat Subsequent Moviefilm: Delivery of Prodigious Bribe to American Regime for Make Benefit Once Glorious Nation of Kazakhstan, more commonly known as Borat 2, the conceit is the same, yet unavoidably different. This is exemplified by a scene not long after Borat’s arrival in the US, during which he is in white y-fronts with his shirt tucked in, chased by a crowd who want to get close to Sacha Baron Cohen’s iconic character.

In the first film, when Borat was unknown to the vast majority of Americans, it was he doing the chasing, of a terrified New York businessman who appeared willing to run into traffic to avoid him, and later unsuccessfully sued the production.

It’s telling that for much of that scene, the film’s climax, Borat is absent. It’s for the same reason he’s now the chased, not the chaser – the original 2006 film birthed one of the most familiar characters in modern pop culture, whose mankini is now compulsory on all stag dos, and whose gangly creator can be spotted a mile off when in character by the vast majority of Americans. (This has effectively cursed his career, and was partly why his 2018 Showtime series Who is America? only intermittently worked.)

The way the production gets around this issue is in creating a second Borat. The film’s proudly thin conceit is that Borat was sent to the Kazakhstan gulag for 14 years for disgracing his nation, and has only been released to chaperone a famous monkey to the US. When he arrives, though, his 15-year-old daughter has stowed away in the monkey’s crate. She demands to be sold into a political slave marriage “like Melania”, which the Kazakhstani ruler agrees to, imagining that it will gain him entry into Trump’s world leader strongman club, alongside Putin and Bolsonaro. Borat accompanies her, taking on a series of bizarre disguises for flimsy but also entirely obvious reasons.

From there, the father-daughter duo are away into the heartland, encountering nominally ordinary Americans so as to reveal just how utterly bizarre they can be. Only, for much of the first half, it’s oddly flat.

In 2006, when the first film was released, the version of America he showed us was far less known to the rest of the world. It was largely pre-broadband, so most of the country’s cultural exports hewed to the traditional manicured image of the country created by sitcoms, pop music and Hollywood. A large part of the film’s appeal was anthropological – meeting odd people in the flyover states, who seemed to have very strange beliefs but be ultimately harmless to the rest of us.

The problem is that we now know, to an exhausting and terrifying degree, just how powerful the combination of Southern evangelicals and bigoted white people without college degrees really were. Then-president George Bush Jr provoked strong opinions, but was ultimately a doctrinaire moderate by US Republican standards, while Trump has ripped up every rule and institution which bound the US together, leading us to this historic and deeply freaky pre-election moment.

Fortunately the second half of the film leans far more strongly into that tension, rather than simply reprising the slapstick encounters of the first. Borat loses his daughter, and, disguised as a kind of eastern European hayseed, joins up with a pair of QAnon believers during lockdown.

That much of this was shot during recent months, through the pandemic, lends it an extra layer of queasiness, beyond the familiar exploitativeness of the first film, because any interactions with the public carry the risk of passing on the virus. It’s only really because – with two glaring exceptions – you feel little sympathy for the members of the public involved that it doesn’t become too distracting (even though it really should).

Or should it? At times the performances coaxed are almost too convenient for the production, and feel more stagey than in round one. While the director, Jason Woliner, has a lot of experience in this realm, from the very post-Borat genius TV show Nathan for You, there are multiple occasions during which the interactions veer over the edge of credulity.

Then the two most jarring scenes of the film ensue. The first features Borat accompanying his QAnon buddies to a right wing fair, where civilians with AR-15s stand guard, and he leads the crowd in an original composition wherein he asks what to do with various enemies of Trump, and thus the people: journalists, the WHO, Fauci. “Inject them with the Wuhan flu?” or “Chop them up like the Saudis do?” It’s amiably sung back by the crowd, and a deeply bleak reminder of what this extraordinary period of political cynicism has done to America.

From there we quickly rocket up the rungs of American power, until we’re in the room with Giuliani, one of the president’s most loyal defenders and enablers. You now likely know the specifics of the scene, but watching it unfold is still quite viscerally impactful – the tawdriness of it, and the fact the production were able to gain access at all.

From there they wrap it all up quickly and efficiently, and somehow the utterly ridiculous landing mostly sticks.

What to make of it all? It’s undeniably compelling at times, with enough sharp intakes of breath to justify engaging. But ultimately knowing where the prejudices and assumptions of the first film were leading makes re-encountering them again far less amusing. The first time around, Borat was pointing and laughing; now the world is living the punchline.

Borat 2 will be available to watch on Amazon Prime Video tonight.