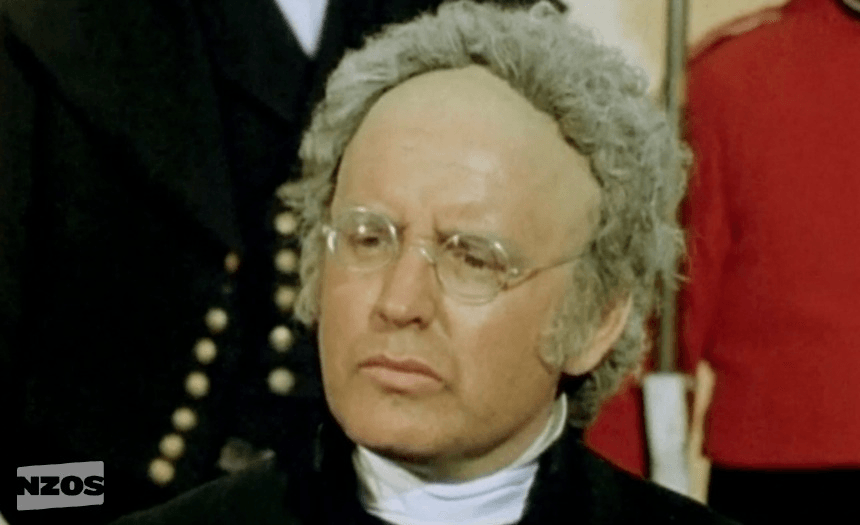 Throwback Thursday: The Governor was a funding controversy to outstrip all others

Inspired by more recent NZ On Air funding controversies, Gareth Shute revisits the 1976 historical epic The Governor, and argues why it remains our finest example of a funding furore.

Julie Christie recently made headlines for complaining in an email to NZ On Air head, Miriam Dean, that her integrity had been questioned by managers at the funding body. MediaWorks had been seeking $5m to create a Home and Away-inspired series for TV3 (they were only prepared to fund the company for $3m).

Just last week, another fracas erupted over the $8m that NZ On Air put behind Filthy Rich, given the modest viewing figures and the largely negative critical response to the show.

These are hardly the first controversies about how local dramas should be funded from the public purse. If we go back 40 years, we can find a TV funding furore that dwarfs the current ruptures.

Soon after New Zealand’s first historical epic The Governor completed filming in 1976, rumours began to fly that over-runs in production had meant it had cost over a million dollars to produce. By the time it screened the following year, the Prime Minister had gotten involved – ordering that the books be opened, so spending on the project could be examined.

The cost of production wasn’t the only issue – many lines of newsprint also railed against the subject matter of the series. The scriptwriter, Keith Aberdein, later admitted in The Making of the Governor that he was purposefully attempting to counter the public’s overly positive view of Governor Sir George Grey: ”The education system still perpetrated the myth of good Governor Grey, so you knew you were coming up against something that didn’t seem to be true. Because you were venturing into the [characters’] private lives – because you have to with drama if you’re doing six episodes of something – you were going to get yourself into some contentious issues. But that’s what we were in the bloody business for.”

Governor Grey had run the colonial government in New Zealand during one of the most hostile periods in our country’s history. He fought with Hone Heke’s people in the North, had the Ngāti Toa leader Te Rauparaha arrested without bothering to charge him with any crime, and unjustly started the Waikato War against the Maori king in 1864 (unleashing some of the bloodiest episodes in the New Zealand Wars). The show also revealed his private indiscretions – among them, a Maori mistress who he kept a secret from his wife.

The producer of The Governor, Tony Isaac, had a bold vision for the project and managed to cast well-respected English actor, Corin Redgrave, to take the key role of Grey. Nonetheless, the local film and television industry was still in its infancy at the time and, from the start, the working process was unorthodox, as director Hugh MacDonald later explained:

“Tony Isaac was a really charismatic guy, but he was also somebody who worked and just didn’t stop. One memorable day, we’d been working all day – it was in the early days of pre-production and the script was still being worked on. At night, we went to the TV1 club. Keith Aberdein came in until the bar closed at 10 o’clock. We went up to Tony’s office and the consumption of strong liquor went on for some hours. I remember Keith lying on the floor dictating excellent, perfectly usable dialogue at 3 o’clock in the morning, before he went off to catch a taxi to go home. Those words ended up in the script.”

The series was a co-production between TVNZ and the National Film Unit, so there were often up to three filming locations being run at any one time – occasionally led to confusion. Actor Marshall Napier was originally fitted for three expensive period costumes, since his character appeared in scenes that took place 20 years apart. After he turned up to filming and found that only one of them could be located, he ended up wearing the same suit in every scene that he appeared in.

The situation was even more off-putting for actor Grant Tilly, who played one of the main roles as missionary Henry Williams. His character had an odd haircut due to having a serious receding hairline and tufts of curly hair around the sides and back of his head. The hairdresser for the production decided that this look should be replicated not by a wig, but by shaving the front of Tilly’s hair off and then perming the remaining hair around the sides. It looked ridiculous, but there was no going back once the shaving was done.

Another problem that the production faced was that even a million dollars wasn’t really enough to recreate the dozens of battle scenes required, each of which involved thousands of men. There was no CGI to fall back on, so most of the battle scenes involved tight shots of only a few dozen men at any one time. For example, the battle of Ruapekapeka (in December 1845) actually involved Grey leading a force of around 1300 British troops and 400 Māori, but you’d hardly get this impression when the battle appears in The Governor:

When the first episode hit television screens 1977, the nation was instantly divided between those that thought our proud colonial heritage had been unfairly tarnished and those that were thrilled to see our country’s history receive an honest examination.

Michael Noonan (who worked for TVNZ as a script-editor on the project) was shocked by the controversy that unfolded: “First of all the Prime Minister – because I think he found it too subversive for words – he wanted to do an inspection of its books. I think that was partly inspired by the private sector of the film industry who were jealous that the project was going ahead and they lobbied against The Governor even though [some of the big names in the film industry] were working on it … After the trouble with The Governor, there was a big clench in what you could do in terms of television.”

Despite the limitations listed above, The Governor remains a high point in local television history. A monumental effort was made to recreate life in the 1800s in a realistic manner, with whole fake buildings were created in distant locations that had the requisite amounts of native forest in the background. This effort extended to depicting Maori life too, with moko experts brought in to draw every facial tattoo and cast member Don Selwyn working as an Iwi liason to ensure each main role was taken by an actor with the right heritage.

Rather than more recent efforts to rip-off an Aussie soap with no redeeming artistic or historic value, it is heartening to see that our biggest television controversy centred around such an amazing, important piece of work.

Throwback Thursday is brought to you by the legends at NZ On Screen, click here to watch three episodes from the historical epic The Governor, or here to watch The Making of the Governor documentary.