You might have only vaguely heard of it, but if you sleep on In Treatment you’re missing one of 2021’s most rewarding TV experiences, writes Sam Brooks.

On the surface, a fourth season of a little-watched series that hasn’t aired in over a decade doesn’t look much like must-watch TV. That’s especially true when said series is comprised entirely of therapy sessions, which largely involve people sitting on a couch and working through their feelings. Game of Thrones it isn’t. But don’t be fooled by the unexciting premise – give In Treatment a try and you’ll discover one of the most deeply rewarding series on television.

The HBO series originally aired from 2008-10 with Gabriel Byrne in the lead, and now stars Uzo Aduba (Orange is the New Black, Mrs. America) as therapist Brooke. While the character is different, the show’s unique structure remains the same: four episodes a week, with each episode covering one session with a patient (annoyingly, Sky is messing with the intended format by only airing the show on Mondays). In the first episode, Brooke has a Zoom session with Eladio (Anthony Ramos), a home health aide who can’t sleep. In the second, she meets in person with Colin (John Benjamin Hickey), an entrepreneur who has recently been released from prison. Laila (Quintessa Swindell), a wealthy teenager forced into therapy by her grandmother, begins sessions with Brooke in the third. Just as in a real therapy relationship, these patients will return on the same day each week for the rest of the season

The fourth episode is where the season breaks with tradition. In the original three seasons, the final episode of each week featured Byrne’s character talking to his own therapist. This time around, Brooke deals with her own trauma not through therapy, but in conversation with a variety of people who visit her at home. It’s a clever twist on the formula, giving the show air to breathe outside the confines of the therapist’s office. 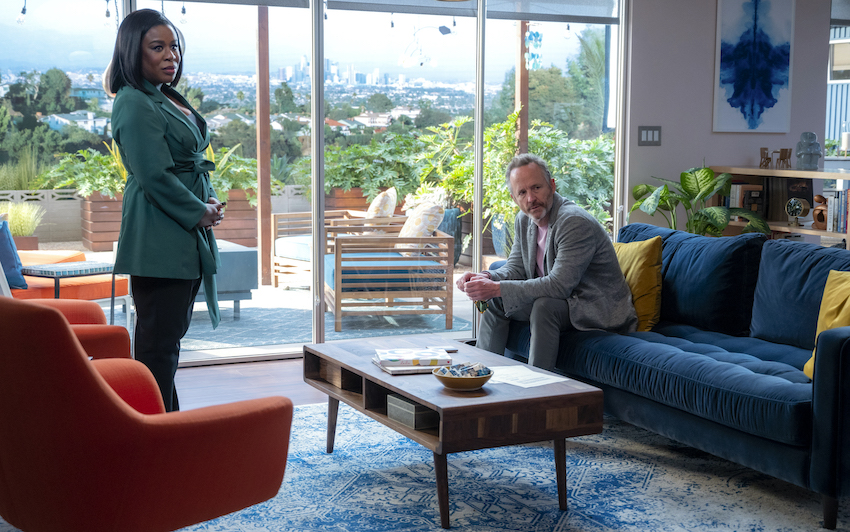 Uzo Aduba and John Benjamin Hickey in the fourth season of In Treatment. (Photo: HBO)

The most obviously praiseworthy aspect of In Treatment is the performances. Almost without exception, every episode easily ranks among the actor’s best work (especially Aduba). However, I think In Treatment’s real triumph is in the writing and direction. It takes genuine skill to take a situation that is inherently theatrical – two actors, one room – and make it feel as high stakes as any other TV drama. Something as simple as Brooke shifting chairs with her patient takes on tremendous importance and dynamism within the context of the series. The performances are what make us care, but it’s the writing and direction that reward that initial investment, and keep us coming back.

Those performances, though. As so often in her career, Uzo Aduba is given a difficult job to do. Her portrayal of Brooke has to reveal the walls she’s forced to put up in order to be an effective therapist, and show her turning on a dime from being a superb mental health professional to just another human terrified she’s messed up on the job. That’d be difficult in a show where there’s a lot of dynamism and narrative to work with, but Aduba has to be what Brooke is to her patients: she has to hold the series and carry it through so we can get to the gold. At one moment, deep into a session with Colin, there’s a moment where Brooke so quickly, and firmly, re-establishes a professional boundary that I literally gasped out loud.

Brooke is a hell of a character. While she might be a great therapist, she’s not a perfect one, and In Treatment shows us where she screws up, where she realises she’s screwed up, and the space in between denial and acceptance. Aduba’s Brooke is so clear that her acting feels more like telepathy than performance; we understand everything she’s thinking and feeling, moment to moment. In short: Aduba finally is given a role where she gets to play within a series, rather than lift it up. It’s the best performance I’ve seen on television so far this year, and I’d be surprised if I find one that equals it. 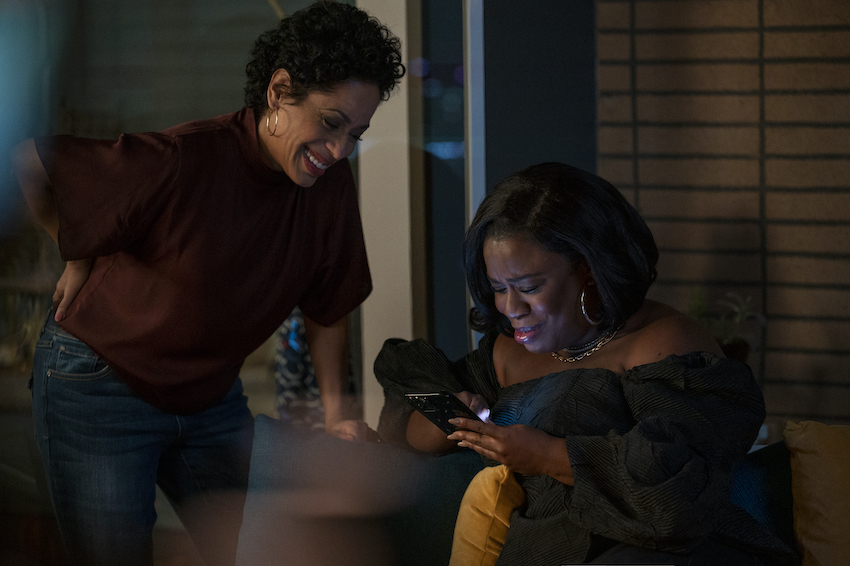 Liza Colón-Zayas and Uzo Aduba in the fourth season of In Treatment. (Photo: HBO)

The fourth season also has ambitions that exceed the fairly modest ones of the original run. The Gabriel Byrne version included brilliant examinations of the human condition, but they were largely, as expected, psychological. There was little reference to the world that existed outside the character’s own frame of reference. This fourth season breaks open that frame; it’s much more about how the collision between a patient’s identity and environment ends up resulting in some kind of trauma, acknowledged or not.

Most of the Brooke-focused episodes include her old friend Rita (Liza Colón-Zayas, matching Aduba beat for beat) and involve the pair either dealing with or ignoring Brooke’s own traumas. With less assured writing or performance, Brooke’s history could read like a list of experiences to run away from, but instead it feels as though the audience is given an insight into how Brooke’s experience as a black woman, and one who grew up with financial privilege, enables her to do her job – but also might prevent her from dealing with her problems. It’s complex territory, and while the show doesn’t always handle this complexity with subtlety, it does actually engage with it. That’s more than a lot of even our best dramas do.

I’ll admit it: In Treatment isn’t an easy sell. There are 24 episodes this season and, unsurprisingly given the material, they can be heavy going. However, if you put the time in, you’ll be rewarded with a series that shows a deep understanding of how society and psychology join forces to really mess up a human being, and one that serves up great performances, incisive writing, and skillful directing along the way. The path out of trauma isn’t an easy one, but In Treatment gilds that path with gold, and we’re the richer for it.

The fourth season of In Treatment airs on SoHo/SkyGo on Mondays from 8pm, and will drop on Neon afterwards.