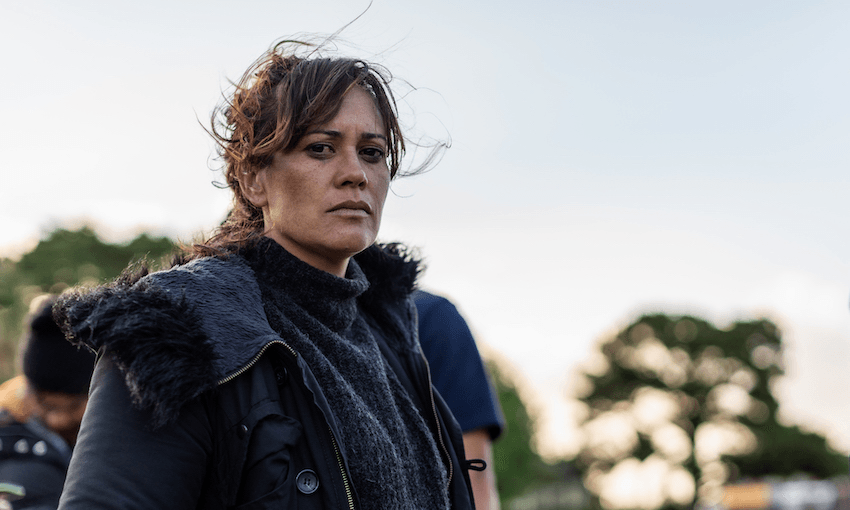 ‘I know these people’: Miriama McDowell on leading the pack in Head High

There’s a moment in the second episode of Three’s new family-and-rugby drama Head High that stands out for me. A committee, entirely made out of bureaucratically-aligned adults discussing a student’s future in rugby, descends into personal attacks and basic bickering. Renee O’Kane, played by Miriama McDowell, has had enough of it and stands up.

“I’m sorry, I know there’s supposed to be some kind of process here, but this is just a room full of adults throwing insults at each other, when what really matters is the two boys who met each other for the first time when they were playing under fives. Bare feet on the frozen ground, they didn’t care, they loved it. I can still see them.”

It’s a great speech; it’s basically handing an actor a big ol’ ham, asking them to cut off a big, juicy slice and serve it up to the audience. McDowell doesn’t ham it up, though. She goes pointed and sharp – it’s not that Jones, both mother and cop, thinks that these adults are wrong for bickering. No, it’s that they simply are wrong. She softens up, appeals to their humanity.

It’s a Tami Taylor moment; a beacon of humanity shining through some less than stellar displays of the human condition. Tami Taylor seems not just a fitting comparison, but an intentional one; the character’s resemblance to that inspiration-dispensing, warm-wine-swilling human spotlight is one of many things that Head High cribs, wisely, from Friday Night Lights. I wager that it’ll be a moment that will stand out for a lot of the audience as well.

It’s the kind of speech that actors would push someone down the stairs to get to say at all, let alone on primetime TV, and a lot of actors could have done that moment justice, but Miriama McDowell doesn’t just do it justice. She takes the opportunity and she runs with it, weaving it to a five pointer.

Since graduating from Toi Whakaari in 2002, McDowell has worked pretty much constantly in film, TV and theatre. She’s delivered stand out performances in Toa Fraser’s No 2, The Dark Horse, and a Moa Award winning turn in The Great Maiden’s Blush. In addition to this, she directed the Pop-Up Globe’s sell-out performance of Much Ado About Nothing in the venue’s second season, and also directed the venue’s final show, Emilia, earlier this year. While she’s been on TV in more roles you can count on two or even three hands, including an obligatory stint on Shortland Street, Head High marks the first time that she is the top-billed actress on a high end television drama.

McDowell admits it’s a big deal. “Being a lead character like that in a show involves work behind the scenes as well. It’s about making sure there’s proper kaupapa Māori in the production, and making sure that we don’t need to put the character in a box of, ‘You’re fluent or you don’t speak anything, so you’ve lost your culture.’ There’s a lot of Māori who sit between those points, but we don’t see them much. It’s also a big deal as a New Zealander to reflect and go, ‘How come we don’t see these versions of ourselves more often?’

Head High focuses on the conflict between two (fictional) South Auckland high schools, Southdown and St Isaac’s, and their rugby teams. The Southdown team has just been promoted into the 1A division, and St Isaac’s is poaching them. It’s a show that uses rugby more as a setting to discuss a range of other things: privilege, race, class, even gender.

When McDowell watched the screening, she saw something that she hadn’t seen depicted onscreen a lot. “Look at South Auckland. Look at the brown actors and look at the families we see. Look at that school, look at all the brown boys behind the lead characters. I know them. I know those people, I grew up with them.”

That diversity, and in the case of Head High, it feels less like tokenised diversity and more like decisive inclusivity. Two of the writers, Tim Worrall and David Geary, are Māori, and two of the writers are women, Kate McDermott and Shoshanna McCallum. McDowell credits the latter with the feel of some of Renee’s scenes. “I really felt like those were scripts that were written by women for women. It’s just so great to play Renee and go through the things that she goes through as a mother. We really feel like we were getting to the heart of it.”

In addition to her impressive resume onscreen and onstage, McDowell has also been working steadily behind the scenes. She was a writer of Silo Theatre’s critically acclaimed Cellfish, alongside Rob Mokaraka and Jason TeKare, and has been steadily building up credits as both a director and an intimacy coordinator. She’s filled both these roles on on Ahikāroa, Aotearoa’s first bilingual drama, and it’s a job that is incredibly special to her.

“What I love about Ahikāroa is that it’s created for the generation of Māori who have grown up with Māori. So the generation who’ve come beyond my generation can’t necessarily see themselves on TV. So the chance to watch flatmates, whose first language in Te Reo, just hang out in a flat is great. If we’re so passionate about creating a whole generation of fluent Māori speakers, then we have to give them something to watch or they’re just going to watch English shows.”

The show, now in production on its third series, is great in its own right, but the most special thing about it is how it serves as a training ground for Māori practitioners to get into the industry, both in front of the camera and behind it. “It’s a show where Māori get to learn TV, and get to learn the skills of TV. Shortland Street is an incredible training ground too, but this is specifically for Māori.”

McDowell has also found the growth of the actors between seasons incredible to see; the core cast aren’t necessarily trained actors, they’re kids who speak fluent Māori who were auditioned, and then put on TV. But the show has also given a break for people like McDowell. Despite all her experience as an actor, writer, and director for theatre, she wasn’t like to get dropped into the director’s chair of a big TV show.

“For someone like to me to get the opportunity to learn is incredible. And it’s incredible that it’s a big part of the production – so often I’ll be on set and then suddenly the guy who’s been doing the clapper board is suddenly on the camera and he’s going to shoot one scene and it’s like, ‘Whoa, cool, OK. Let’s go, then.’ We’re all learning.”

McDowell hasn’t just been taking opportunities as they come, she’s been excelling at them.

Head High airs on Sunday nights at 8.30pm on Three.