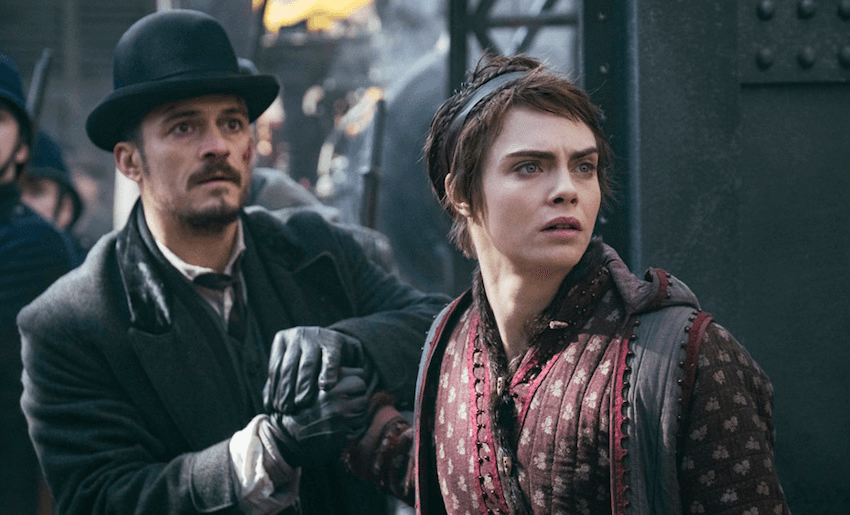 Review: Carnival Row is stuck in the fantasy ghetto mud

The fantasy ghetto is real, and it’s hard to get out of it. Game of Thrones managed to get out of it through the sheer quality of the first season, and also by keeping its more fantastical elements cleverly buried until audiences were already invested in the world. Lord of the Rings, the books, managed to get out of it by being, well, one of the first series to do it, and the films got out of it due to the sheer prestige of those novels. But for most, it’s an uphill battle, especially for a television show. Remember The Shannara Chronicles? Van Helsing? Wynonna Earp?

In that sense, Amazon Prime’s Carnival Row has an uphill battle. But there’s another, more, unexpected challenge. Carnival Row isn’t based on a pre-existing source (although it is based on an unproduced screenplay which absolutely does not count, sorry). From a commercial perspective, using existing IP has a huge upside – there’s an in-built audience who will watch your thing. Those people might be very sensitive about it, and any changes made to it, but they’ll show up.

But even more importantly, a completely new work doesn’t have a wealth of lore to draw on. There’s no bible, no predetermined narrative, no list of players – all of which are undeniable assets when you’re trying to build a world, especially a world that involves magic, myths and legends, one that requires real rules so an audience knows where the boundaries are. Carnival Row has to make it up from scratch, and oh my lord, does it ever botch it right from the get-go.

The premise is a mish-mash of influences and inspirations, from Neil Gaiman (if we’re being charitable) to Mortal Engines (the novels not the film). It’s set in an Victorian-ish era, when mythical beings like fairies and satyrs (Faefolk, sigh) wander amongst us. Humans have invaded their world to exploit their resources, and now these creatures form an underclass of servants and refugees who are discriminated against on their own invaded land.

Enter our two leads. Cara Delevigne, full of attitude if not emotion, plays Vignette Stonemoss (sigh), a fairy who gets shipwrecked in Burgue and plays servant to Imogen Spurnrose (siggggh), a wealthy woman who is, of course, prejudiced against the Faefolk. Orlando Bloom, channeling Johnny Depp at his most Sleepy Hollow, plays Rycroft ‘Philo’ Philostrate (you can just take my sighs as a given from now on) who is hunting a serial killer who is specifically targetting Faefolk. If it reminds you of Jack the Ripper, that’s because Carnival Row desperately wants it to. Subtlety is not in this show’s playbook.

From the premise, you can gather more or less everything you need to know about the series. Firstly, it plays around with allegory, rather than engages with it. Words like ‘immigration’ and ‘refugees’ are thrown around while winking towards the audience, because it’s just like our world, you know? Unfortunately, any analysis stops after ‘people are racist against immigrants’, and the Faefolk end up being yet another awkward attempt by fantasy to engage with racism and classism. Like countless imagined worlds before it, Carnival Row never reconciles the fact that comparing other species to people of colour is not actually addressing the problem of racism, but reinforcing it.

Secondly, Carnival Row is as self-important as a pre-Vatican II mass. Scenes sag under the weight of whatever message or feeling it is trying to impart, and the hours drag as a result. Worse, it mistakes this self-importance for maturity. Every dead body is lavished over by the camera like it’s a landscape, every swear is relished by the actors like they’ve just come off ten years on a kid’s show, and every mumble to camera is treated like it’s Proust. It’s exhausting, and it leaves the entire endeavour feeling flat, and dark. (Which is to say nothing of the literal darkness of the show, which makes for a sleepy viewing experience altogether.)

Both allegory and self-importance are fine if you’ve got enough depth to support it. Game of Thrones did both because it had some seriously impressive writing, acting and production behind it. You’re going to accept that silly shot of the dragon’s wings flaring behind Daenerys because you’ve had eight seasons of setting her up as a complex character with layered, conflicting motivations. But I’m absolutely not going to accept a sickeningly exploitative shot of people washing up onshore after a shipwreck that is lifted directly from the coverage of Syrian refugees washing up on the shore of the Mediterranean Sea. No show earns that 15 minutes into the pilot, especially not this one.

Despite all this, Carnival Row has been renewed for a second season, even before the first premieres. If you’re looking for your Game of Thrones fix, might I suggest the novels, or any one of the many prequels set to debut in the coming years? If you’re looking for a fantasy fix, might I suggest some other artform, like video games or maybe a book? But if you’re in the market for some dark fantasy with about as much depth as it has colour, then sit back for eight episodes of Carnival Row. Be careful not to play in the muck too long though, you’ll get dirty.

You can watch Carnival Row on Amazon Prime.