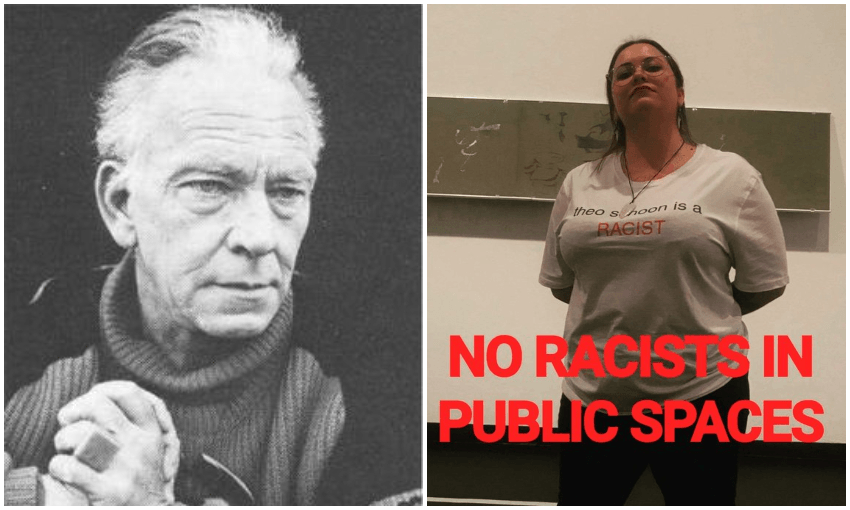 The debate over Theo Schoon, who built his career on the backs of Māori artists

An exhibition of Dutch-New Zealand artist Theo Schoon at the City Gallery in Wellington has set off a debate about the place of racially problematic work in public spaces. Lana Lopesi reports on the ongoing protests, and how they connect to the activism at Ihumātao.

When Theo Schoon: A Biography by Damian Skinner was released in October last year, critic Anthony Byrt wrote scathingly that the then-upcoming exhibition Split Level View Finder: Theo Schoon and New Zealand Art, had “a hell of a lot of heavy lifting to do to convince us that Schoon really does belong in the clouds, among the greats of New Zealand art, or whether he’s better left under the ground, feeding the roots.” Well, the exhibition curated by Skinner and Aaron Lister is now open at City Gallery Wellington and I’d say that’s exactly what we’re figuring out.

The slippery character of Dutch national Theo Schoon is no secret. He was born in Indonesia and moved to Ōtautahi/Christcurch in 1939, when he was in his early 20s. A serial cultural borrower, Schoon is known for his performing of Javanese dance, for drawing over Ngāi Tahu rock drawings, and for his gourd carving. Not only that – as the exhibition catalogue tells us, by the end of his career “he would claim to be making authentic Māori art, the equal of any of the taonga preserved in local museums”.

Schoon is the latest of a number of New Zealand modernist artists, including Gordon Walter and Guy Ngan, to receive renewed attention in recent years. “Presenting Schoon’s work now involves facing up to a series of issues,” write Skinner and Lister in the catalogue. “The most urgent is his appropriation of Māori art. The colonialist — at times, patently racist — ideas underpinning his project are difficult to see past from a contemporary perspective. There are legitimate questions as to whether such work should be given time and space now and if an exhibition such as this necessarily endorses or excuses such attitudes. Māori art certainly did not need or ask for Schoon to be its saviour — this was a delusional and potentially harmful position to adopt.”

The question whether such works should be given time and space was thrust into the spotlight last Thursday by a group of protestors. The activists, made up of students and artists, spread themselves throughout the exhibition. They all removed the top layer of their clothing to reveal matching white t-shirts which on their front read ‘Theo Schoon is a racist’ and, on the back, ‘Fletchers supports this exhibition’ and ‘We stand with Ihumātao’’. Thus clothed, they engaged in conversation with gallery goers about their protest, and about Theo Schoon, the artist and the racist.

When I spoke with protest organiser Anna McAllister about the reasons behind the protest, she raised concerns about the exhibition retraumatising Māori and “the capacity of City Gallery and two Pākehā men to facilitate the criticism and critical thinking that this kind of artist requires”. She continued, “I think that those who have criticised this protest as trying to re-write history have failed to take into account that this is not a museum, this is a contemporary gallery. We aren’t wanting Schoon to be taken out of the history books, we just don’t believe he should be celebrated in a contemporary space, where his views simply do not belong.”

I asked City Gallery Wellington’s director Elizabeth Caldwell to respond to the criticism. She said that “one of the exhibition’s aims is to introduce new generations to this work, the issues it carries, and its role in our art history.” For Caldwell, the “protest was not unexpected, given performative protests happening elsewhere in the art world. This exhibition opens up the very issues being raised, putting them front and centre.”

Co-curator Damian Skinner acknowledged that the protests were “raising really important issues that we intend the exhibition and catalogue to explore as well. I hope that the way we have done that — including the two floor talks that I know some of the protestors attended — have put these questions front and centre.

“What becomes exciting is what we as the curators can learn about how to deal with complicated artists like Theo Schoon — and whether it is possible to show their work in a way that takes responsibility for the unpleasant histories that their work is entwined with.”

Another point of contention is the exhibition’s connection to The Fletcher Trust Collection, given the current protection of Ihumātao in Auckland against development of the land by Fletcher Building. Protest organiser Anna McAllister said that the irony of Fletcher’s support for the exhibition was too clear to ignore. The protestors “wanted to show our solidarity with the mana whenua” at Ihumātao, she said.

But she also argued that it’s important that the public knows how the art they view is being funded. “It’s not surprising that an institution like City Gallery doesn’t mind getting funding from Fletcher’s and in a perfect world that wouldn’t happen, but I understand that that’s a very far off dream at this point.”

Gina Matchitt is an artist and a City Gallery staff member who joined the protest on Thursday. Asked about her decision to protest in her workplace, she said the gallery already has a shaky record on exhibiting Māori art, both historical and contemporary, and she didn’t understand why it would give over so much space to a figure as controversial as Schoon. Concerned about the ways in which the gallery upholds Te Tiriti o Waitangi, she joined the protest in part to bring attention to the need for a Māori curatorial voice within the gallery, one that previously existed in the Curator of Māori and Pacific Art. The role has now been disestablished.

Caldwell said that the gallery had received input on the exhibition from prominent Māori artists Nathan Pohio and Gerard O’Regan, as well as from the rūnanga from Te Papaiouru marae in Rotorua, where a Schoon mural has been hanging for close to 30 years. But what about the lack of a Māori curator? “There is an assumption that art museums are generally evolving such positions,” she said, “but numbers don’t necessarily bear this out. In New Zealand art museums (there are about twenty), there have been only two substantial specialist positions. They are in the two biggest institutions — Te Papa and Auckland Art Gallery — both of which have substantial collections ranging from the historic to the contemporary, and large teams of specialist curators with separate portfolios. Compared to Auckland and Te Papa, City Gallery is tiny, with no collection, and an exclusive contemporary art focus.”

What Caldwell’s comments don’t acknowledge is the growing trend for similar sized galleries and museums to bring in outside Indigenous curators as needed, such as for this year’s Māori Moving Image: An Open Archive at the Dowse Art Museum in Lower Hutt and Christchurch Art Gallery Te Puna o Waiwhetū, and for the recent Edith Amituanai survey show at the Adam Art Gallery in Wellington.

So are Damian Skinner and Aaron Lister, both Pākehā, the best people to bring this exhibition to life? Asked about this, Lister pointed to Skinner’s “decades-long, highly nuanced work in the territory in and around Schoon and Māori art more broadly, which includes a masters thesis, a Phd, a huge research and publishing output.” For Lister, “there is nobody better equipped [than Skinner] to take on this critical thinking.” In a way, Skinner sees the heavy lifting as a specifically Pākehā problem. “A long time ago a friend said to me that she was sick of teaching Pākehā what was wrong with their way of thinking; she had stuff she wanted to do for herself and her people that were more important. Pākehā are your people, she said, so why don’t you take responsibility for them? That has stuck with me. I would call it decolonisation. Schoon is my problem.”

Skinner emphasised that both he and Lister were conscious of these challenges and made an effort to state and deal with them upfront. However if “visitors to the exhibition and readers of the catalogue conclude that we haven’t grappled with them very successfully” then that is a judgement he is willing to accept.

So how should we view Theo Schoon? According to Megan Tamati-Quennell, Te Papa’s curator of modern and contemporary Māori and Indigenous art, Schoon made a “contribution to the development of New Zealand modernism through his engagement with Māori art.

“He can be accused of appropriation; while he recognised the value of Māori art he approached it in a way that’s problematic today. These are really important conversations to have.”

Split Level View Finder: Theo Schoon and New Zealand Art is the first major exhibition of Theo Schoon work since 1982. The uproar over it is perhaps a good indication why.

Anna McAllister says the Schoon protestors will continue to have a presence within the exhibition and as many of the related public events as possible.