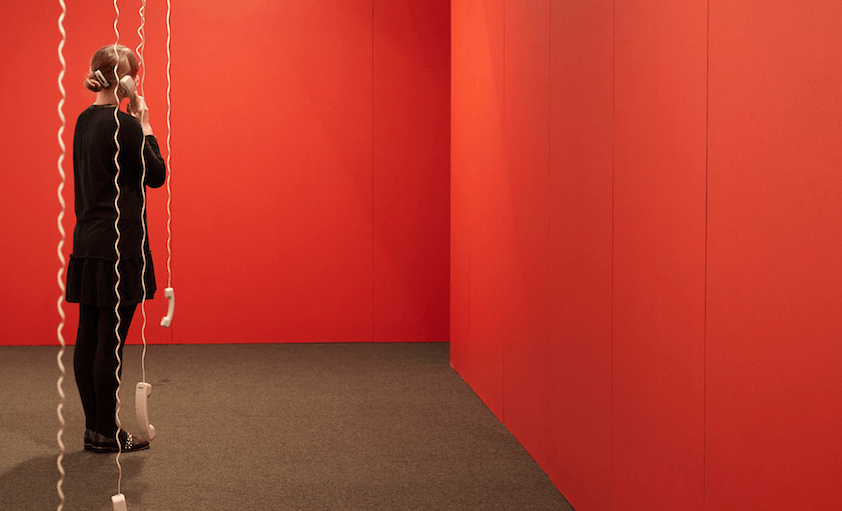 Toeing the Party Line: an audio artwork about the Unfortunate Experiment

Party Line is a new audio work by Evangeline Riddiford Graham that reinvestigates the Cartwright Inquiry, medical mispractice and misogyny through the lens of the #metoo era.

In a red room six handsets dangle from the ceiling on their spiral cords. I pick up one and hold it to my ear.

“I feel so ashamed, they’re bad memories and what must you think of me?”

Party Line is a work by New Zealand artist Evangeline Riddiford Graham, commissioned by Te Tuhi in Pakuranga for the current group exhibition Wax Tablet. The painted red walls add urgency to this audio work that reconstructs material from the “Unfortunate Experiment” scandal, which saw cervical cancer patients used as test subjects without their knowledge or consent. In 1987, journalists Sandra Coney and Phillida Bunkle exposed the experimentation in a story published in Metro magazine. which led to an inquiry led by Dame Silvia Cartwright. The inquiry report, published in 1988, prompted the establishment of a national screening programme for cervical cancer as well as sweeping changes to the regulatory framework for patient-centered care and medical research.

I spoke to artist Evangeline Riddiford Graham about how and why she returned to the scandal that shook New Zealand in 1987.

Why did you create an audio work touching on the Cartwright Inquiry?

Before this project, I only had a vague sense of what the Cartwright Inquiry involved. My initial impression wasn’t incorrect, but I had drastically underestimated the extent of the deception, misogyny and medical malpractice at National Women’s Hospital during this era, and the suffering endured by female patients there. I had done my research before my initial interview with Dr. A, a female med student on rotation at National Women’s at that time, but I was still shocked by her story. I felt it added another thread to the history that needed to be shared. Working in audio seemed like the perfect way to present a narrative that is slippery, challenging, and still so raw.

How did you create the script?

The “script” is based on a series of interviews with my collaborator, Dr A. My impulse after our first phone conversation was to rewrite the interview in verse, but when I transcribed the recording it was clear to me that Dr A’s language should stay intact. Next, I wrote a pared back script copying her phrases almost verbatim. We read it through together, editing along the way.

We both found the process of revising and re-enacting empowering. Some oral historians have noted that when participants have the opportunity to not just tell their story but also listen back to it and revise it, they are able to shape the fragmentation of trauma into a coherent narrative. As you do in a good phone call, Dr A and I went through the process of “talking it out” together. We kept adding material, kept questioning. ­By the final conversation you hear in a Party Line, we were both “well-rehearsed.”

What started out as fact-finding (on my part) became a conversation. Dr A told me how much her own experience of her story had changed as we talked about it. Reframing her story as a narrative, rather than a group of disparate incidents, had improved her ability to process it. At the same time, my understanding of her story deepened. My hope is that the audience too can share in this experience of active listening, the kind that exposes the storyteller’s challenges and self-doubt.

Why did you participate in the reconstruction personally?

Creating Party Line hinged on Dr A’s continued input – and my response to it. Re-enacting our conversation was an opportunity for my collaborator to re-tell her story, a project in which I had become her collaborator. I worried that an actor would add an unproductive veneer to the project, like those medical educational videos in which a performer plays a patient who is presenting symptoms for a real trainee doctor to diagnose: too many layers! There had to be somebody to act as a friendly ear at the end of the line – that’s what a phone call is.

Dr A seems the real deal, is she? How did you prepare for your respective roles?

Yes, Dr A is the real deal. The pseudonym was her idea – an echo of solidarity with the patients and test subjects who are referred to in medical research as “Patient X.” The project is based in memory and doubt. I believed that to attach her name might misrepresent the work as a more “objective-oriented” piece of journalism and could expose Dr A to a derision that seems to persist within the medical community about how seriously women’s health should be taken. I would add that, while Party Line is a true story, its truths rely on the techniques of fiction, rather than journalism. Where journalism clarifies, fiction layers and intensifies. Dr A’s anonymity allows the piece to dwell, like fiction, on the ambiguity of memory and morality – creating an opportunity for the audience to identify with her story.

Party Line is vernacular and conversational, yet it’s about the mistreatment of women in a hospital that had legally binding ramifications. How did you choose what to tell and what to leave silent?

An oral history can offer what a legal report cannot: moments of confusion and contradiction. What Dr A told me wasn’t the worst of what happened at National Women’s – perhaps it wasn’t even the worst part of her medical training. What she told me were the details that come alive in ordinary speech: the surgeon hurrying the trainees along because he had a “game of golf to get to”, the nameless women with their “bums in the air”. I suspect the language she used was a semi-conscious reflection of the culture associated with these memories, one in which male doctors treat female patients (and female staff) with the casual confidence of autocrats. Dr A’s story and idioms are intimate rather than institutional. Party Line isn’t a court document or a big bronze for the city waterfront; it’s a conversation between two women.

This is a new commission for Te Tuhi. What was your conceptual brief and how did you come up with visual elements of the installation – the phones, the red room?

When Andrew Kennedy, the curator, invited me to make a work for Wax Tablet, we talked about the role the image has in fragmenting memory, particularly with respect to how we think about the human body. Andrew also suggested painting the gallery walls red because it enhances memory reception.

The phone handsets are a play on the way many of us engage with audio art – dipping in and out. Presenting the interview as a private conversation – intruded upon by the listener – also highlighted the contradiction at the heart of what was happening at National Women’s: the belief that women don’t matter but that their bodies do. The female body is coveted as a specimen of that most valid of human enterprises: science. In one horrifying, surreal moment in Coney and Bunkle’s article, Dr Herb Green has gone to a conference in New York and taken the patients’ excised wombs with him.

Tell me how the title Party Line resonates in the #metoo era.

In the early days of telephones, a street would share a telephone circuit. Your neighbor could pick up the receiver and listen in on your calls: this was called a “party line.” The image encapsulates, for me, the less-than-private nature of life in a small place. The image is gendered, too, conjuring up the stereotype of the house-bound woman for whom what happens on that phone line can make it noose or a lifeline.

#MeToo is like a party line at its most positive and powerful: a massive social upheaval spurred by women being able to network on a global scale and instrumentalise their shared trauma to seek justice.

On the flipside, the “nosiness” of the telephone party line image overlaps with the behaviour of the doctors at National Women’s Hospital: both reflect a desire for control.

The male doctors’ entitlement shouldn’t be underestimated in the story of what happened at National Women’s. In their alleged “interest” in women’s reproductive health, the doctors overseeing the experiments toed the “party line” of misogyny: that the female body is collective property and therefore male property.

Dr A stands up to misogyny, yet she is already compromised by her participation in the system – she’s caught out by the rest of us listening on the party line. I wanted to create a document that was ephemeral, emotional, and complicit: to afford Dr A the time to have her #MeToo moment and question it, too. My favourite part of her story is when she recalls her elation at the publication of Coney and Bunkle’s article:

“And I still have the article, I remember reading it and feeling – Oh! I felt so vindicated, a million dollars, to have what I was seeing, seen.”

For more listings of current art exhibitions across Aotearoa go to ArtNow.NZ