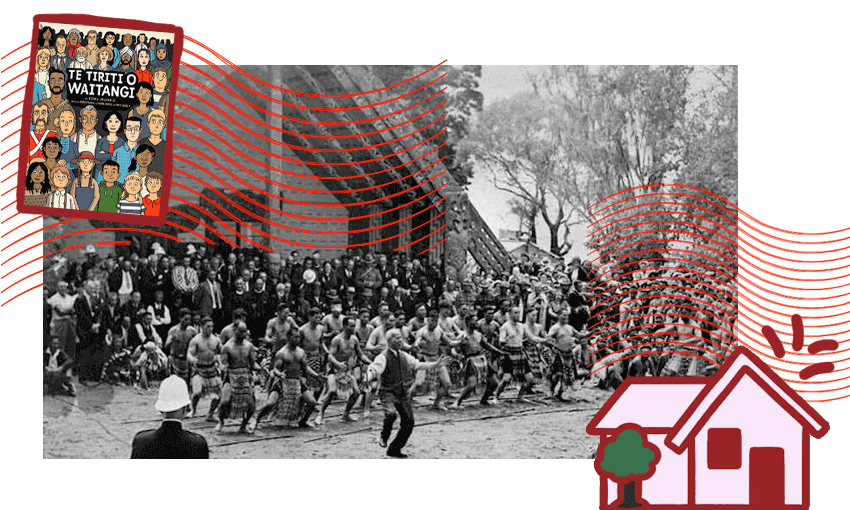 How to celebrate Waitangi Day at home

Waitangi Day is an opportunity to have a good, hard look at the historical reasons for why things are the way they are – and that doesn’t have to stop just because the festivals are cancelled.

While we’ll all enjoy a public holiday on February 7, very few of us will be celebrating the reason for the season in public. Thanks to omicron, Waitangi Day celebrations across the country have been cancelled, including in Waitangi itself. Back in November the Waitangi National Trust made the decision to cancel its annual festival, as well as the usual political activities, and have since announced the Treaty grounds will be closed to the public over the long weekend.

So what does that leave for the country to celebrate? Aside from a day off, what does Waitangi Day actually mean to us without the bells and whistles?

For many of us, Waitangi Day is a day to protest and debate the legacy of colonisation. Ironically, it was the government’s centennial celebration of the signing in 1940 that first gave Māori the opportunity to challenge Treaty breaches publicly.

The government had tried to use the centennial to drum up a sense of national pride and unity by celebrating “a century of European progress”  – until then the signing had been seen by New Zealanders as a historical event of little interest. For Māori, with the spectre of poverty, land loss, disenfranchisement and the imminent sacrifice of their sons to WWII haunting their waking days, nothing could be worth celebrating less.

“In retrospect,” said Sir Āpirana Ngata at the opening of the new Whare Rūnanga marae at the Treaty  grounds, “what did the Māori see? Lands gone, the power of chiefs humbled in the dust, Māori culture scattered and broken.”

Now, 80 years on, political leaders and their constituents come from all over the country to gather at Te Whare Rūnanga and Te Tii marae to campaign, debate and protest. While it’s not always pretty, this public forum is unique to Aotearoa. Music and kai are an integral part of the celebration too.

So in that spirit, here are some ways to mark Waitangi Day with your friends and whānau away from the crowds.

You won’t get the PM’s annual barbecue this year or the bagpipes at dawn, but if you’re interested in the politicking that happens over Waitangi weekend, a three-hour Waitangi special will air on Three on the morning of February 6. Produced by Northland’s Te Hiku Media in collaboration with Three, events and a number of interviews were pre-recorded at the Treaty Grounds in late January to create a “virtual Waitangi” experience.

Māori TV’s all-day coverage, hosted by Stacey Morrison and Neil Waka and in partnership with Iwi Media, kicks off with the the pre-recorded insights and interviews from Te Hiku Media also showing on Three, followed by a one-hour Te Ao With Moana special focused on mana wāhine. The afternoon and evening bring a lineup of Aotearoa-made films and documentaries, including the premiere of A Reason to Rhyme, which charts the rise of hip hop in NZ. The full day’s coverage concludes with a Troy Kingi concert that runs until midnight.

The 1997 documentary Radicals is a who’s who of original Waitangi rabble rousers. At a time when the media were hell bent on portraying protest leaders as violent and divisive, this Māori-made documentary gives their side of story. Featuring such key figures as Syd Jackson, Hone Harawira, Ken Mair, Mike Smith, Annette Sykes, Eva Rickard and Joe Hawke, it’s a great contemporary oral history of protest at Waitangi told by the people who were there.

This strangely watchable reimagining of the days surrounding the signing of Te Tiriti takes the known facts and then adds some flourishes. Co-written by Witi Ihimaera and Gavin Strawhan, What Really Happened follows a journalist interviewing those present at the signing. It is at times quite funny, while also introducing us to the historic figures and events responsible for this nation we now find ourselves a part of.

There’s a lot of academic text dedicated to Te Tiriti, and that’s not even taking in the thousands of pages committed to settlements. Readable books and articles can be hard to come by.

In 2018 the School Journal produced a comic book version of the story of Te Tiriti, created by historians Ross Calman and Mark Derby, and illustrated by The Spinoff’s creative director Toby Morris. You can order the comic through the Ministry of Education and wherever kids’ books are sold; there’s an audio version available to listen to here.

For a more adult text, you can’t go past historian Dame Claudia Orange’s An Illustrated History of the Treaty of Waitangi, which first came out in 1987 and was revised and republished three years later. “This book is commended to all who love their country,” wrote Ranginui Walker in his review at the time. Orange’s detailed analysis of the past 200 years of race relations, and the decades of political and social implications, was revised and rereleased again in 2020 in a beautiful coffee table-style book.

Treaty settlements are a fraud by Morgan Godfery

Rangatiratanga and immigration by Arama Rata

Te Tiriti and the abyss of meaning by Ranginui Walker

Getting together (safely) to share a meal is a great way to intentionally celebrate the holiday. It’s also a good excuse to look to local ingredients and makers for inspiration.

Hiakai owner  Monique Fiso is a creative genius with native kai and one of our most celebrated fine-dining chefs, but she does have some recipes us mere mortals can attempt. This kūmara flatbread can be cooked on the barbecue and is delicious on its own, drizzled with honey and butter, or loaded with toppings.

Although the kūmara starter takes about three days to prepare (hello long weekend project), you can continue to use it to bake all kinds of breads.

Here sisters Kasey and Kārena Bird share recipes for creamed watercress and a kūmara gratin. Once you’ve watched that, check out the Masterchef winners chatting to us about cooking at home on the marae.

Episode five of Nē? – Tangata Tiriti – looks at the other side of the Treaty partnership. You know… the non-Māori one. The hosts get chatting to filmmaker Julie Zhu about the group Asians Supporting Tino Rangatiratanga, and producer Lillian Hanly about growing up Pākehā in te ao Māori. Both provide great insights for tauiwi to consider when taking a good hard look at their rights and obligations under te Tiriti.

Good tunes for a long weekend are a given, and you can’t go past Herbs’ classic 1981 mini-album What’s Be Happen for some righteous protest vibes.

Don’t forget to chuck this classic anthem by Aotearoa on the playlist.