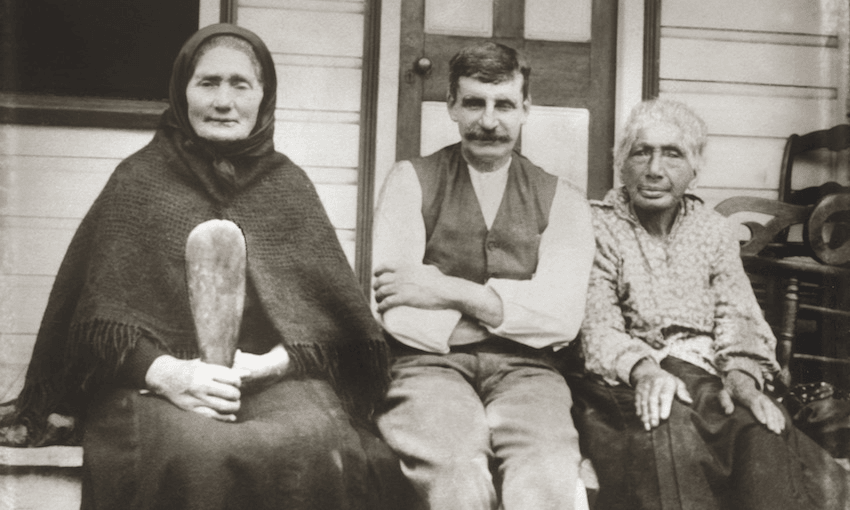 Mere Harper was part of the mixed-descent community that burgeoned around the shore- whaling station established at Waikouaiti in the 1840s. She was the daughter of Mata (Caroline) Punahere of Ngāi Tahu and William Elisha Apes, a Native American Pequot from Massachusetts. Punahere was originally from Arowhenua but probably went south to seek refuge at Puketeraki during the wars between Ngāi Tahu and Ngāti Toa in the 1830s.

Apes, who was described as ‘a six-footer’ and ‘an exceptionally big and also very powerful man’, arrived in Te Waipounamu aboard the Anna Maria at Port Chalmers in 1839. He deserted ship with another sailor over the captain’s inhumane treatment of the ship’s boy. Apes lived with Punahere at the whaling village at Waikouaiti. The couple were married in August 1844 at the Wesleyan Mission church soon after the birth of their second child. Mere Apes (Hipi), born on 7 May 1842, was the first of their six children who survived to adulthood; two other children died in infancy. With the exception of one son, Thomas, all of the Apes children lived their entire lives at Waikouaiti, later known as Karitāne.

Mere grew up in a period of immense change. She was born two years after the signing of the Treaty of Waitangi and was still an infant when the first sales of Ngāi Tahu land to the British Crown took place, beginning with the Otago Deed of Purchase in 1844. Her father worked at the whaling station until its demise in the mid 1840s and later worked as a fisherman. An 1851 census listed the Apes family as living in a clay house with two acres of fenced land, growing crops of wheat and potatoes, and raising pigs and a few cattle. According to Thomas Kennard, who grew up at Waikouaiti in the 1840s, Mere’s mother was ‘very honest’; the local storekeeper gave her ‘unlimited credit’. Mere probably attended the mission school that had been established by Reverend Watkin in 1844 and was later run by his successor Reverend Creed.

In 1863 Mere married an Englishman, William Harper, a former skipper of the Alice and the Result. They had one child, William (jr). In 1872 Harper was appointed the deputy harbourmaster of the port and later the light-keeper on Huriawa, the distinctive teardrop-shaped peninsula at the mouth of the Waikouaiti River. William and Mere lived in the lighthouse keeper’s residence near the top of the road there from about 1876. The elevated view from the house and proximity to the lighthouse – said to be visible ‘in clear weather for seven nautical miles’ – made it easier for Harper to assist vessels crossing the bar.

Mere, affectionately known as ‘Big Mary’, was, like her father, extraordinarily tall and strong. As a young woman she earned money by carrying passengers ashore on her back from the ships that came in at Waikouaiti. On at least one occasion she dunked a passenger who dared to use his heels to hasten her ashore. As the historian William Anderson Taylor phrased it, ‘anyone taking liberties with the lady in her task of porterage soon found a sudden bath’. Numerous accounts of her physical feats were recorded, including an 1898 letter to the editor in the Southern Cross recalling a wager on her strength:

“‘Big Mary’ … would then be about twenty-one years old. She was six feet high and made in proportion, a modern Hercules, and weighed about sixteen stone. She was noted for her strength, far and near, so much so that for a wager she carried three diggers, swags and all, from the surf boat to the beach. She took one under each arm while the third man was perched on her back. She walked to the shore with her load and put them down as easy as if she had been carrying bags of chaff. She was the strongest woman I have ever seen…”

Kennard described William Harper as ‘a superior man’ and recalled that Mere was ‘big and pleasant, and she would visit my wife and me on occasions and have tea with us’. The couple participated in the Waikouaiti Regatta on 1 January 1877. The Hope, the only vessel in port, was decorated with bunting and the flagstaff was adorned with flags. Mere won the women’s dinghy race in the Kowarra and her husband won the ‘Whalers Race’ in the Shark, to the delight of an estimated one thousand spectators who lined the shoreline, eating fruit and sipping cordial – no alcohol was allowed.

With the completion of the railway to Puketeraki and the loss of regular traders, the port trade at Waikouaiti ended in the 1880s, and with it the need for a staffed lighthouse. Thereafter, William worked as a fisherman. At some point he returned to England to secure an inheritance. Some prophesied that he would never return to New Zealand, but ‘he knew when he had a good partner and he came back contrary to the expectations of the gossips’.

By the early twentieth century, Mere and her brother Thomas were among the oldest residents living at Waikouaiti. In 1905 when public toilets were proposed on the foreshore, Mere protested because a tipuna, ‘Hine Koraku’, was buried there. Her knowledge of such wāhi tapu, place names and traditions made her a highly valued cultural informant for a number of Pākehā ethnographers, including William Anderson Taylor, who regarded ‘Mrs Harper’ as his ‘best informant’ for the Ngāi Tahu history of the area. He recalled, ‘Mrs Harper (Big Maere) and I have sat often in those days that are gone, well into the night, going over stories of the past on the slopes of Karitane.’ Taylor’s notebooks include long lists of Ngāi Tahu place names attributed to her and others at Waikouaiti, including Hoani Matiu and Tame Parata. In the 1930s and ’40s Taylor wrote several newspaper articles that drew upon information provided by her, much of which was published in Lore and History of the South Island Maori in 1952. Henry Devenish Skinner recorded information on Māori house types and construction methods from Mere, and James Herries Beattie interviewed her though he did not specifically record what he learned.

In later years Mere worked as a midwife among Māori and Pākehā in the district. Like her contemporary, Ria Tikini (Mrs Chicken), she also worked closely with Frederic Truby King, the founder of the Plunket Society, who was her neighbour on Huriawa. The first ‘Plunket’ baby taken into King’s care in 1906 was Thomas Rangiwahia (Mutu) Ellison from Puketeraki. Mere and Ria Tikini assisted with the baby’s delivery and later helped King to care for him when he was failing to thrive. In 2016 David Ellison, Upoko of Kāti Huirapa Rūnaka ki Puketeraki, and the son of Mutu Ellison, sought recognition for the two Ngāi Tahu midwives who had worked alongside King. As a result, an interpretation panel on the foreshore at Karitāne overlooking the Waikouaiti River was updated to recognise their contribution

Mere Harper, ‘a very picturesque figure in Karitāne, where she lived for the whole period of her eighty-two years’, died on 30 May 1924. Along with all of her siblings, she was laid to rest in the urupā at Puketeraki.