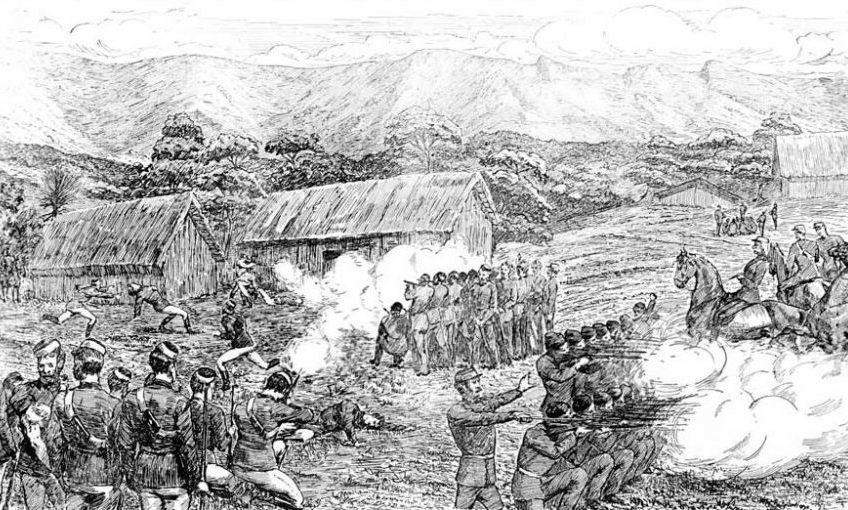 Learning (and not learning) about the New Zealand Wars

Historian Vincent O’Malley conducted his own survey over the weekend on what people did and didn’t learn about New Zealand history at school. The results, no matter how unscientific, still paint a clear picture.

By now many people know something of the story of the small-town petition from which big things grew. In December 2015 students from Otorohanga College and their supporters presented a petition signed by over 12,000 people to Parliament.

Some eight months later the government announced that a national day of commemoration for the New Zealand Wars would be established. Rā Maumahara was born.

Less well-known is that the Otorohanga College students had a second objective. They wanted the history of these conflicts to be taught in all schools. We are still waiting on that one.

The Ministry of Education strongly opposed this aspect of the petition in a 2016 submission to the Māori Affairs Committee, while admitting it had no idea how many students studied the New Zealand Wars.

Anecdotally, many people have told me they learned nothing of these wars. But I was curious to know more. So I took to social media. Last week I put up a Twitter poll with a simple question: Did you learn about the New Zealand Wars at school?

NZ Twitter: Did you learn about the New Zealand Wars at school? #NZWars

The response was phenomenal. 1484 people of all ages responded in the three days the poll was running, many leaving comments about their experiences of learning (or not learning) about the New Zealand Wars at school. They were thoughtful, frank, sometimes heart-warming and at others outright depressing.

This was Twitter, not a scientific survey. Individual memories can sometimes be unreliable. And it would be great to have known more about the ages, areas and ethnicities of those who answered. Even so, the number of responses allows for some general impressions.

Some people had incredible learning experiences. Many mentioned teachers who had been inspirational and sometimes ahead of their times. A common theme among these respondents was the power of field trips to the battle sites (a sentiment shared by the Otorohanga students, so shocked by what they learned on a site visit to Ōrākau and Rangiaowhia that they wondered why they hadn’t heard this history before and vowed to do something about it).

Yes – way back in the 1970s! We went on a field trip around battle sites in the Hutt Valley & Pauatahanui – Boulcott Farm was just a block from school. Had a big impact on me, & it’s a crime that more NZers haven’t had the same enlightened teaching.

yes but not until form 7 – I was the only student who took history that year, and my teacher was so passionate about the subject that he ran the class even though there was only one student ❤ https://t.co/aSIZdOn5wL

NZHistory in 7Form was hands down best subject. Had a girl who said all Māori were lazy/violent blah blah etc who by years end was in tears coz she fought w/her mum (I assume she inherited her prior views from mum) bout the toxic impact of colonisation on Māori #knowyourhistory

Yes, because of two special, stand out teachers. Mr Dey in standard 4 took us to battle sites at Te Ranga, Pukehinahina, and to Monmouth redoubt. He also took us on the Rainbow Warrior. Form 2 bilingual class, all Māori students, Pā (Jack Te Moana) took us to all the sites too.

Yes, but only at 7th form & probably just due to chance: an amazing history teacher who cared enough to cover this, & the fact that I went to high school in Hamilton. We visited battle sites in the Waikato as part of our module – it was life-changing

Others reported learning only a little about the wars at school or felt what they did learn was incomplete or wrong.

We had some old textbooks from an era long gone, very Pakeha centred and Maori were portrayed as bloodthirsty savages.
Pretty light on facts or context really.
Grew up ashamed of my own people for a long time. Mid 20s before I saw the beauty of my own culture and values.

In my day they were called the Maori Wars, because Maori started them. There is a whole generation of NZers who have to unlearn stuff before the can know the truth

1980s sixth form history had a good whack at it. Of course the title of the block was “Māori Land Wars” (definitely no macron) so the perspective was egregiously wanting.

Many more people (61% of respondents according to the poll results) said they learned nothing about the New Zealand Wars at school.

I learned nothing whatsoever. South Island, 1981-1985 time frame. An example I use a bit is that when I got out of high school, I’d have thought that Parihaka was ‘somewhere near Taupo?’ and that von Tempsky and the Forest Rangers might have been a country and western band.

I learned about the battles in Tauranga from my whānau, especially my mother and her father. Schools never taught me anything about the topic. https://t.co/J1A70a8wGQ

I didn’t, and I didn’t take history past fourth form Social Studies at Auckland Grammar in the 90s. This was despite having George Grey’s name being in bold up on the front of the Great Hall for assembly each morning

I asked my second year Design Ethnography students this question.

As the Otorohanga College petition suggested, our rangatahi want to know this history. And as a nation it is important that we explore how this might best be achieved, not just for those lucky enough to have teachers and schools that support this kaupapa.

It is a call that history teachers are increasingly supporting. But given that only a minority of students opt for history from year 11 onwards, arguably this topic needs to be introduced earlier, probably as part of the social studies curriculum in years 9 or 10.

By all means debate the practicalities of how this might happen. But to me the principle is just common sense. We need to know, understand and own our history. The New Zealand Wars are a critically important part of that history that defines us as a nation.

This is our story, our history. It happened here, in this place, relatively recently in historical terms and it had profound consequences for what New Zealand was and would become.

When you have young people pleading to be taught the history of the wars fought here you know that it’s time older New Zealanders listened and paid heed. We might even learn something from them.