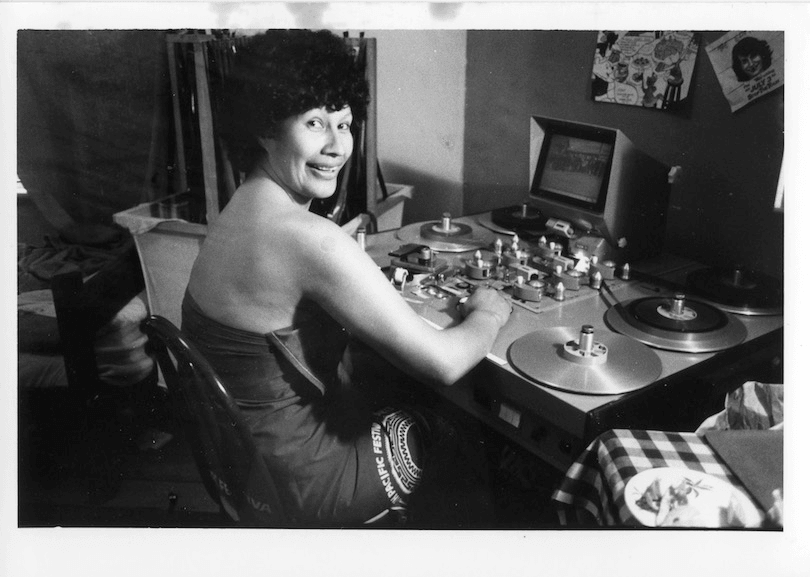 A son celebrates his mother in Merata: How Mum Decolonised the Screen

Professor Leonie Pihama on the unique values and perspective filmmaker Merata Mita brought to the screen, and how it changed how we see ourselves.

“The way I see it, if you’re a Māori woman and that’s all you are, that alone will put you on a collision course with, that society and its expectations. And if you flatly refuse to give up your Māori value system for an easier way of life, and you live in a society which is supposed to be bicultural and multiracial but isn’t – that’s a lie – then you’ll be in constant conflict with how that society is run and how it sees itself. That’s been my experience.”
– Merata Mita, Head and Shoulders (1986)

There is something particularly powerful about the voices of her whānau as they share the story of the life and works of Merata Mita in the documentary Merata: How Mum Decolonised the Screen. It is a narrative form that has sat at the centre of her approach to her filmic storytelling, both documentary and drama.

In How Mum Decolonised the Screen director Heperi Mita (Merata’s youngest son) takes us through a whānau journey that brings to the fore the many experiences that both shaped and motivated his mother’s life and work. When whānau share their stories of those they love it is layered, like a well recited cultural, genealogical template that is our whakapapa. Whakapapa is both identity and stories. It is a cultural framework through which we come to recall who we are, where we are from, the collectives to which we are connected and to whom we are responsible. It is a series of layers that go as long, as deep, as high and as wide as we determine as Māori.

This story, in my view, is inherently one of whakapapa kōrero, of storytelling that is deeply embedded within and emboldened by the influences of our connections and understanding of our place and our role in the world.

In the opening sequence Hepi speaks to his role as an archivist and the part Merata’s films play in enabling the telling of this country’s stories. Stories that even today many seek to deny and to silence. For years Merata Mita struggled in a space where Māori voices were denied, Māori stories were deemed insignificant and where Māori women’s place was contested, sometimes even by our own men. A manipulation of tikanga that prioritised colonial notions of gender worked to marginalise the fundamental essence of mana wahine. She worked relentlessly and unapologetically in those spaces with a hope that “once the work shows you are capable then prejudices of race and sex may fall away.”

Across her works, Merata actively engaged issues of colonisation, racism, sexism and classism, and represented examples of the intersection of those issues before many even considered the ways in which multiple oppressions impacted upon our people. Her commentary within interviews about her work highlight a desire to bring forward all of those issues when it was far from acceptable to do so, including issues that were deeply personal. As is so clearly articulated by all voices in the film, her work has also been critical in the remembering of the courage and strength of Māori and indigenous nations that live in a context of colonial occupation. As her reflections on the documentary Bastion Point Day 507 highlights:

“What courage, what strength, what commitment, what dedication to stand and say, in the face of our army and our police and the rest of the country howling for their blood. What extraordinary people. From that day forward I have been fearless because it’s as if you’ve become part of something greater; it’s like a rebirth. It’s kind of  like when you fear nothing, when you lose your fear about anything it makes you that much more powerful you get so much more strength.”

The work of Merata Mita has been a powerful critical influence for many indigenous peoples. It has also been influential in the ways that Māori and indigenous films and storytelling has evolved over the past 40 years. This documentary tells us of the life of a mother, a film maker, an activist, a mentor, a storyteller, a change agent. It tells us of mana wāhine, of tino rangatiratanga, and of work driven by an aspirational vision for a future where all of our tamariki and mokopuna can live fully as Māori on our own lands. It also reveals to the world the struggles that she as a Māori women filmmaker and her tamariki endured in order to be a part of the transformative change that is needed in Aotearoa.

As Merata states in the documentary: “When you come up against that kind of racism, you know… so raw… it’s probably one of the ugliest things you have to experience in your lifetime. But the fact of the matter is that when you have children you have an investment in the future and so you come out fighting again.”

That is a message that is all too common in the experiences of many Māori activists and their whānau across a range of struggles and movements in this country. Being at the cutting edge challenging the status quo in order to seek change for future generations often comes at a high cost. And most often that cost is borne by whānau. But as we weave through the stories shared by Hepi, Rafer, Richard, Rhys, Awatea and Eruera (to whom the film is dedicated) we are reminded of the centrality of whānau to the work. Both as support and as inspiration. The reflections shared by each of them is a testament to the powerful contribution that whānau make to the act of sharing forward the stories of Māori women and Māori people that put themselves at the forefront of the struggles of our people. This is something Merata did many times with films such as Patu, Bastion Point Day 507, Te Hikoi Ki Waitangi, Mauri and others. We hear also of the life influences that are integral to her work including the bringing forward of her cultural and spiritual understandings within films such as Mauri (1988) where the audience experiences a broad range of cultural, political, emotional and spiritual responses, aligning to her view that “Wairua is an active force in filmmaking.”

What Merata: How Mum Decolonised the Screen presents us with is not only the story of the first Māori woman to write and direct a feature film, which in itself shows us what a powerhouse she was, it is a story of the perseverance of a Māori woman to bring our stories, our images, our histories and ourselves to the screen in order to challenge the world to become a better place for our tamariki and mokopuna.

This is a documentary that opens the door for many who have not seen the extensive work of Merata Mita, and encourages us all to seek out her works as a way of understanding many of the issues that we currently face here in Aotearoa. These are works that contextualise racism, sexism and classism as inherent to the ongoing systems of colonisation. As the current debate over the inclusion of Māori history within education continues to rage, we are reminded that in order to move forward in Aotearoa we must come to terms with our past.

The influence of Merata’s work in the context of decolonisation is internationally renowned and validated throughout the indigenous world, as evidenced through her close relationships with filmmakers such as Alanis Obomsawin (Abenaki), Hawai’ian sovereignty leader and scholar Haunani Kay Trask and Sundance indigenous progamme leaders Heather Rae (Cherokee) and Bird Runningwater (Cheyanne/Mescalaro Apache), amongst many others.

Decolonising and indigenising the screen has never been solely about image, or the narrative. It is about the essence of what it means to be indigenous. It is about telling those stories, framing those images and shaping our understandings in ways that align to our cultural, spiritual, emotional and intellectual ways of being as Māori and indigenous nations. It is about our right to be self-determining in all spaces, including film. What is clear is that for our stories as Māori and indigenous peoples to be heard we must tell them ourselves. We must see ourselves and we must create those images through our own lens. That has always sat at the centre of the decolonising intent of Merata’s work. An intent that has been honoured in this documentary by those that most count: her children.