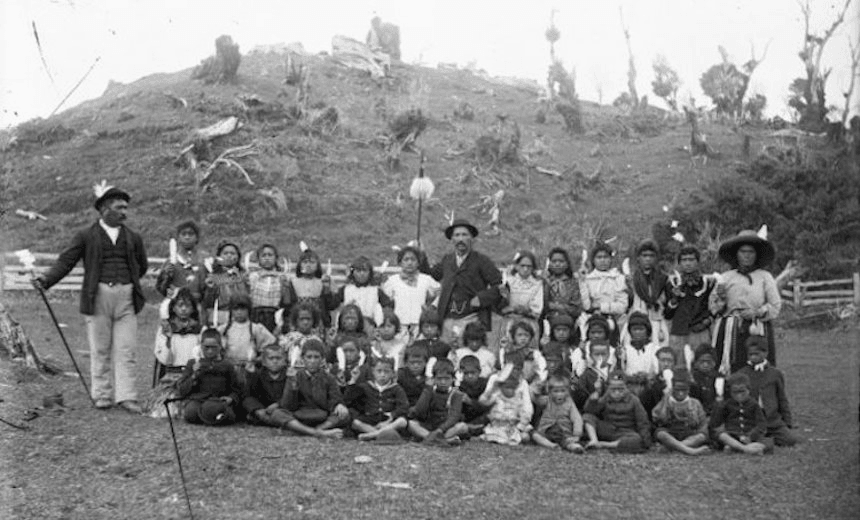 Who gets to speak for the people of Parihaka?

As a proposed new law to protect the Parihaka name makes its way through parliament, Rachel Buchanan reflects on the shifting legacy of something that is so much more than a set of GPS coordinates.

In 1848, my kuia Arapera Rongouaroa Parai gave birth to Tāre Warahi (Charles Wallace) at Te Aro Pā, in what is now downtown Wellington. Koro Charles worked as a translator at Parihaka and along the coast at the time of the ploughing and fencing protests in the late 1870s. His mother wore the raukura. His uncles lived there.

It’s only taken 19 years to gain the knowledge required to write those sentences, so I hope you like them.

Parihaka changed my life and the proposed new law that protects the South Taranaki geographic name – Parihaka – challenges me to think differently about the world and how my work fits into it.

There’s something about Parihaka that hooks you in.

Although I grew up in Taranaki and had visited Parihaka when I was a teenager, it wasn’t until 2000 that Parihaka hit me like a comet. The impact was quite comical when I think of it now. Like a personal big bang.

I had just finished my honours thesis with a professor of urban history at Monash University in Melbourne and I wanted to go further.

The plan was to do a PhD on Melbourne’s first high-rise buildings. Then I saw Parihaka: the Art of Passive Resistance, the millennium exhibition at Wellington’s City Gallery, and decided to change tack and study history-making about Parihaka instead.

I say decided, but there were other forces at work.

I had no undergraduate training in Māori history or indeed New Zealand history. I had no language skills, a wishy-washy sense of my whakapapa, and I was based in Australia. Also, the week my candidature started, I discovered I was pregnant.

As someone who can never be accused of looking on the bright side of life, I had doubted I would ever be able to get pregnant. Nice to be proved wrong on that one.

A few months later, a heavily pregnant me met with Te Miringa Hohaia, who instigated and curated the City Gallery exhibition, and also with Te Huirangi Waikerepuru, the leader and teacher who composed the mihi at the front of the exhibition catalogue.

Back in Melbourne, Te Miringa appeared in a dream and led me through each room of City Gallery, talking all the time, admiring the exhibition but also complaining about how some things had turned out.

Oh, to revisit that supervision meeting, this time with a tape-recorder.

Two babies were born, the PhD was completed, another baby was born, the book was written, the journal articles too, the talks were delivered, the father died, the second Taranaki book was written and after each bit of work I’d think, “OK, that’s it. You’ve got nothing new left to say about Parihaka. Move on!”

Yet here I am again, preparing for a visit to Wellington where I will speak at the City Gallery and the conversation will inevitably loop back to Parihaka.

As a student of Parihaka, I have analysed the ways the Crown and its agents have attempted to make up for the 1881 invasion and ransacking of what was then a large community of non-violent resisters to colonisation, but I have been guided towards taking more interest in how Taranaki Māori people have tried to lift the hurt and shame of muru me te raupatu (confiscation and marginalisation).

The most recent attempt to make up was in 2017 when representatives of the Crown went to Parihaka to issue a negotiated apology. The ceremony was followed up by Te Pire Haeata ki Parihaka/Parihaka Reconciliation Bill.

After the first reading in March 2018, the bill was referred to the Māori Affairs Select Committee and public submissions were invited. Thirty-nine were received, including one from the Parihaka Papakāinga Trust that sought protection for the Parihaka name, its story and legacy.

The amended bill, which has just had its second reading, seeks to protect the name of Parihaka from commercial exploitation (including registration of trademarks and company names, and other uses in trade).

It will be the first time in New Zealand that a geographic place name will be given such protection.

“This is not a silver bullet,” Kelvin Davis, minister for Māori Crown Relations – Te Arawhiti, said. “But in the current context and until issues regarding the protection of mātauranga and taonga Māori are addressed more broadly, this is a start.”

Section 3B defines Parihaka as a series of coordinates.

All those numbers in a row, like a brand on a prisoner’s shirt.

I don’t want to see the word Parihaka on a packet of biscuits or a bottle of beer, but I also don’t want Parihaka trapped inside some GPS coordinates.

At City Gallery, I did not encounter a geographical location, I encountered an idea. I entered into a dialogue, like many artists and writers before me, and that dialogue was expansive.

What I loved about studying Parihaka was the way understandings of the place and its purpose have shifted over time for people from Taranaki and for outsiders, and it is still shifting as time passes.

So, no matter what those coordinates say, Parihaka is all over the place.

In 2016, Ihumātao is described as “the Parihaka of south Auckland”.

In 2005, Parihaka is part of the non-violent kaupapa of foreshore and seabed protestors.

In 1929, Samoan women and men who are part of the Mau independence movement are described as the “Te Whitis of Samoa”, a reference to their tactics of non-violent resistance, a strategy transmitted across the Pacific via the friendship between a Parihaka old boy, Māui Pomare, and Samoan leader Ta’isi Nelson.

As for Parihaka’s place in New Zealand history, art history or literature, take your pick!

It’s been like a creative-commons scenario, a sharing and reuse of creative content produced by people who had been brutalised by several decades of war and had found, in non-violent resistance, a new way to try and hang on to something, anything.

With Te Pire Haeata, the people of Parihaka and the parliament of New Zealand are signalling that the free-for-all is over.

These questions are relevant for Ihumātao as much as for Parihaka, but I don’t know what the answers are.