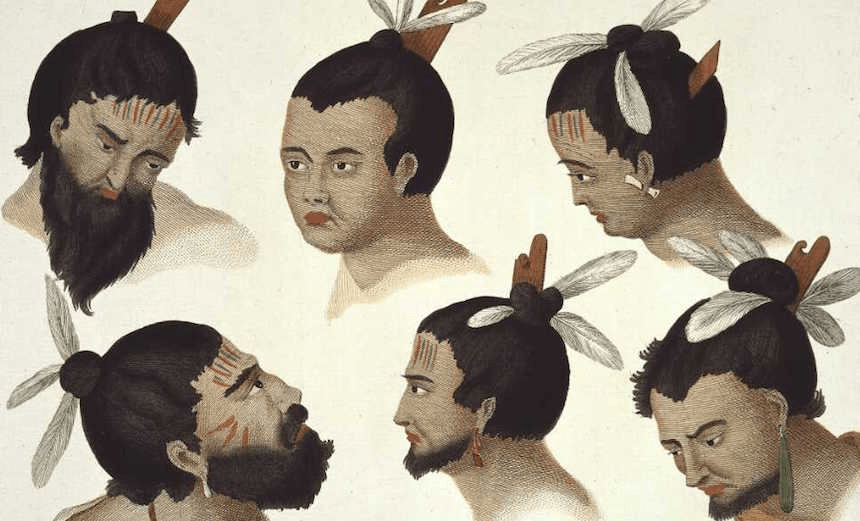 What hairstyles meant to our Māori ancestors

Most of my life growing up I was the clean cut Māori boy with the short and tidy haircut, but all of that changed when I started learning about the tikanga of hair, writes Te Miri Rangi.

Through my journey of understanding more about how my Māori worldview can shape my hauora, I discovered the way that my tūpuna reinforced practices and behaviours that encouraged people to be healthy. I began to eat the kai that enhanced the mana of my tinana. I thought about physical activity and movement differently. And before long I also stopped seeing the barber to get my kina haircut and began growing my hair out long.

It’s quite interesting how much a person’s hairstyle can tell you about who they are and what they represent. But often we make those judgements based on learned behaviours and the social groups we belong to. In all societies, the way in which the hair is worn communicates a range of information about the wearer. So what happens when you mix cultural beliefs with social norms?

In traditional Māori society, a wide variety of hairstyles were common as they depicted social status and rank within communities. These hairstyles are believed to reflect mythological origins like that of the atua or god known as Rehua who was believed to have held his large locks of hair in bands on top of his head. On one occasion Rehua loosened his bands to release his hair and a number of tūī flew out. In another story the famous Te Arawa trickster Hatupatu was known to imitate the hairstyles of certain chiefs to fool a raiding tribe into believing that he was supported by a great many number of chiefs. Along with the depth of cultural value associated with various hairstyles, the hair could also convey messages to others.

When a person’s hair was frazzled, or rapa, it was a sign that they were in a state of tapu. Mamae rapa is the unkempt hair of a person in mourning. Individuals had been known to keep their hair untidy and frazzled until the death of their loved one had been revenged.

Other hairstyles include the reureu, which consists of a lock or plait of hair from the left temple while the rest of the head was shaved. Rino makawe describes a wavy, frizzled lock of hair, kind of like a dreadlock. Then of course we have the twisted or knotted hair worn on the top of the head. This style had various names including; tiki, pūtiki, tikitiki, tuki, koukou, and rāhiri. Many of these names describe unique hairstyles, unfortunately early writers translated many of these to the non-specific term ‘top-knot’. Sadly, much of the traditional local knowledge of our hair styles has been lost.

Beyond the hair we had adornments like the heru or comb, and we also dressed the hair using oils or kōkōwai, a highly regarded red pigment extracted from clay. Heru were carved from various types of wood or bone and you can often still see them being worn today by men and women. The oils were cold-pressed from various berries like the tītoki and perfumed.

Behaviours and protocols associated with the head were of great importance. To Māori, the head is considered a tapu, or sacred, part of the body. Touching the head of others is frowned upon. High-ranking individuals could only have their hair attended to by someone of greater status. This was done to ensure the tapu or sacred nature of a person’s head was not compromised. During war high-ranking prisoners may have had their head shaved as an attempt to destroy their mana.

I began to think that perhaps my continual practice of shaving my head was limiting my mana, and potentially restricting what I was truly capable of. Does having long hair give me some type of super power? I had heard about the biblical figure Samson who lost his strength after having his hair shaved. Is there any real merit to the inherent qualities carried in our hair?

I found a paper that described the extraordinary tracking abilities of First Nations Americans who were recruited into the military as scouts during the Vietnam War. However, after conforming to the military’s code of shaving the head, their ability was lost. It was believed that their long hair empowered them to strengthen their connection to their environment. The story seemed a little fanciful but it did reinforce ideas about the tapu nature of the head.

Perhaps our tūpuna were on to something. In my Māori mind I could make sense of this connection between our sacred ūpoko, or head, and the world around us, but my clinical mind was still a little dubious. It may seem improbable, but it turns out that the hair follicle can act as a sensory organ detecting movement above the surface of the skin. It can activate neuroreceptors on the surface of the skin that sends important sensory information to the nervous system. The cells at the opening of the follicle can also detect pathogens which can activate the nervous system to defend against biological threats. Essentially, the hair and where it attaches can serve a function beyond simple aesthetics.

In the end I thought I couldn’t have anything to lose. I decided to stop cutting my hair and nearly three years on I wear my hair in a tikitiki or top-knot. It took some time getting through the awkward mid-length stage, but I was committed to a kaupapa that was about acknowledging the tapu nature of my head and hair, the potential for developing a super-power, and not about anything aesthetic.

Unfortunately, the opinions and views of the society that we live in continues to shape the way that others perceive me. Despite the cultural beliefs and ideas that I have about what my hairstyle means to me, the tikitiki that I now wear has been caught up in some hipster trend that categorises me into something that I don’t identify with. Both my Pākehā and Māori friends will take a stab at my ‘man-bun’, but people are yet to understand the tikanga that underpins it. Those moments are a great opportunity for me to teach people about how our tūpuna respected their head and hair, and who knows, maybe I will develop that super-power after all.