A planned marina at Kennedy Point on Waiheke Island has led to an occupation by a group against the development for over 100 days. Last week, tensions were stirred as police arrested three protesters. Charlotte Muru-Lanning on what’s behind the dispute.

What is going on?

The picturesque Pūtiki Bay on the south side of Waiheke has provided the backdrop to occupation, protest and police action as local residents and iwi members continue to fight plans for a new marina.

And what are the plans for Pūtiki Bay?

The project for Kennedy Point Marina is led by Tony Mair, who has previously developed 17 marinas locally and overseas. The Waiheke project includes around 180 berths, a floating carpark, onshore facilities like sewage containment and a cafe. Developers say at least 150 berths have sold so far, and most planned construction has been contracted for. The cheapest berth sells for $180,000.

When did this all start?

Auckland Council granted resource consent for the Kennedy Point marina in 2017. The residents’ group, Save Kennedy Point (SKP), has been fighting the proposal since then through the Environment Court, the High Court, then the Court of Appeal. In a last ditch legal effort, the group appealed to the Supreme Court to overturn the High Court ruling so they could return to the Environment Court to challenge the consent. In April 2021, the Supreme Court dismissed SKP’s application for appeal. There is no further right of appeal in relation to the Supreme Court’s decision. SKP has since disbanded, but members still support the current occupation.

Protect Pūtiki are the group who have been occupying the planned marina space. The group is spearheaded by Ngāti Paoa Trust Board, supported by iwi members and locals.

Why are Protect Pūtiki occupying the bay?

The group are concerned about the impact of the project on the kororā or little blue penguin who inhabit the rock breakwater wall and the natural environment. In addition, there are frustrations about the privatisation of a public area and a lack of consultation with local iwi.

Auckland Central MP Chloe Swarbrick says “the protection of penguins is a very important issue, but on top of this it’s very important we recognise this as a Treaty of Waitangi issue”.

What went wrong with consultation with local iwi, Ngāti Paoa?

Developers say that when they were undertaking public consultation in 2018, Ngāti Paoa Iwi Trust were the only recognised iwi trust Auckland Council required engagement with, so they relied on that information. The other representative group, Ngāti Paoa Trust Board say they should have been consulted, and that the blame lies with Auckland Council.

Kennedy Point Marina company spokesperson Kitt Littlejohn says they feel they’re “caught between a rock and hard place”. He says they’re in a difficult position as they followed the Resource Management Act Process (RMA), were granted consent by the council and have now spent five years planning and have already invested in the development.

The developers went through the RMA process, what’s the problem?

While the developers have been through the mandated and correct RMA process, the way the RMA has been applied by councils in terms of Māori engagement has long been criticised. As well, it’s argued that the consultation process doesn’t actually meet the promise of ‘partnership’ guaranteed by the Treaty. Swarbrick says, “the RMA doesn’t place enough emphasis on relationships with mana whenua”.

None of this is helped by the fact that in this case, a significant number of Ngāti Paoa have been displaced from Waiheke post-colonisation. 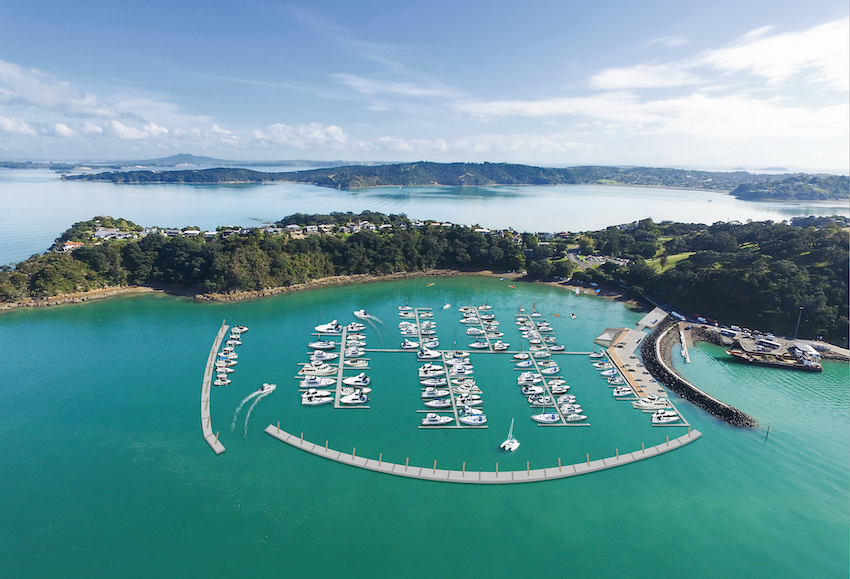 Why is Pūtiki Bay important to Ngāti Paoa?

Protect Pūtiki organiser, Emily Māia Weiss (Ngāti Paoa) explains that Pūtiki Bay “is space we whakapapa to”. She says it’s the ancestral place of Te Arawa and Waikato-Tainui. For the organisers, their resistance is a protection of their ancestral moana, matauranga and whakapapa connections which they believe is threatened by the planned marina.

The whole bay is the kainga of kororā, which they feel a responsibility to protect.

Will the (very cute) kororā be ok?

It’s hard to say. The developers say no harm will come to the kororā. From their perspective, they’ve been through a long RMA process with the input of penguin experts along the way. As part of their consent, they have a detailed penguin plan to manage the effect of the development on the kororā and breakwall, put together by Dr Leigh Bull, a seabird ecologist contracted to undertake an independent review by the company.

Those against the marina argue that disturbances to the rock wall which the kororā inhabit along with pre-construction, construction and post-construction activities will negatively impact the penguins. A recent report from John Cockrem was critical of the current penguin plan and argued works on the marina needed to stop till a larger study can be completed. Karen Saunders from Waiheke Native Bird Rescue and Forest and Bird have consistently voiced concern for the safety of the penguins.

Weiss says she’s frustrated that the scientific reports have “no inclusion of matauranga Māori, even though it’s a taonga species”.

Protesters say this is an unfair privatisation of public space, are you allowed to build a marina on public land?

Yes (though there is a process to get consent). Littlejohn says, “every part of our coastal marine environment is public space, but the RMA allows parties to seek rights to use for things”, like seawalls, marine farms, ports and in this case, marinas. The developers argue that the area of water wasn’t unencumbered before this development and that the development will include public amenities. According to them, the bay was previously a mooring area with around 37 boats parked in the water. Why are protesters concerned about the environmental impact?

Weiss of Protect Pūtiki says the marina will be “another unnecessary scar on the moana”. To them, the protest is about setting a precedent on the climate emergency.

According to the 2020 State of Our Gulf report on the Hauraki Gulf, marinas in the gulf have risen from 13 in 2000, to 18 in 2020. The same report outlined the degradation of the gulf, along with the detrimental effect that marinas had on the marine environment. Findings from the last report “suggest the current weighting is tipped too far toward development and utilisation”.

What result do Protect Pūtiki want?

Ngāti Pāoa members occupying the site have vowed to stay put until the resource consent for the development of the marina is revoked.

Unlike land based occupations like Ihumātao, occupying bodies of water comes with a set of specific practical difficulties and risks. This has been confounded by cold winter weather and the “extreme police presence” protesters were met with last week where three were arrested and there were reports of police violence toward protesters. Police maintain that their “officers acted with the utmost professionalism in what was a very challenging and at times hostile environment for our staff.”

A petition by Protect Pūtiki that already has more than 15,000 signatures is calling for a stop works by Auckland council and a review of the resource consent given by Auckland council under section 128 of the RMA, on the basis that it was granted with an inaccuracy, in that it excluded a legal entity of Ngāti Paoa – Ngāti Paoa Trust Board. They are also calling for the Minister for Conservation/ Acting Minister of Conservation to amend the Hauraki Gulf Marine Park Act 2000 to prohibit any future marinas on Waiheke Island and for those ministers to mandate a process that will enable all affected parties to come to an outcome everyone can live with.