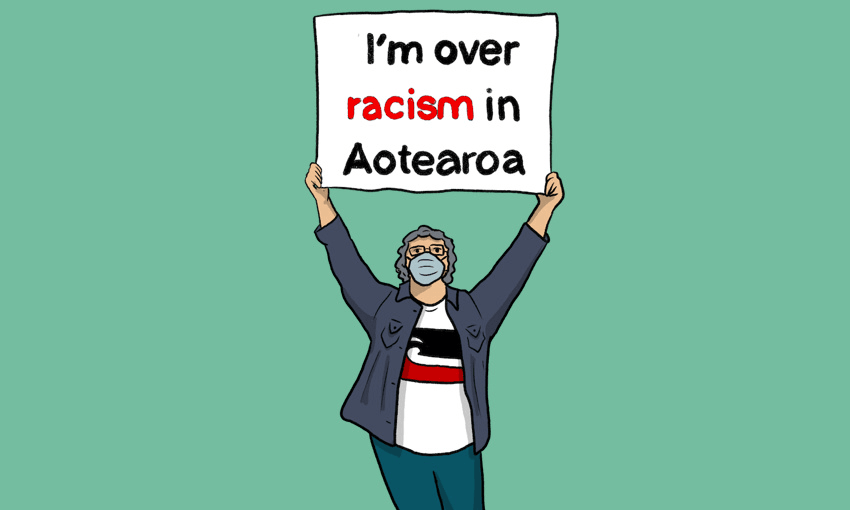 Māori health advocate Gabrielle Baker looks at a landmark survey that puts into words what so many Māori already know: racism in Aotearoa affects us every day.

“I mean, I think New Zealand is the best place on the planet, but it is a racist place” – Taika Waititi, 2018

This week, Te Atawhai o Te Ao – an independent Māori research unit based in Whanganui – released Whakatika: A Survey of Māori Experiences of Racism. The report is heavy, but it is also the culmination of years of incredible work to give expression to what most of us experience as Māori in Aotearoa.

Te Atawhai o Te Ao researchers surveyed over 2,000 Māori between February 2019 and February 2020 at Māori-centred events across Aotearoa. The survey was run in-person (rather than online) and to be eligible to fill in the survey people needed to be Māori and 16 years or older.

Talking about racism is not new for us. In the 1980s, the landmark Puao-Te-Ata-Tū report drew a line in the sand about racism and its impacts on Māori. It identified institutional racism within the then-Department of Social Welfare and championed an anti-racist, by Māori, for Māori approach. And even before then Māori were talking about and protesting racism and colonisation in all sorts of ways – within whānau, on marae, in churches, as hapū and iwi. Māori researchers have pointed at inequities between Māori and non-Māori and other examples of racism over the decades, building an evidence base on how this affects our health and wellbeing as Māori.

What the Whakatika report does that is especially new, however, is shine a light on the everyday impacts of racism in a way that helps us to make sense of our experiences.

Some of the instances of racism covered in the report are what might be called micro-aggressions – the subtle instances of discrimination or judgment that leave you wondering “yo, is this racist?” This includes things like receiving slow or no service in shops (89% of people said they were less likely to get service in a shop than other people, because they are Māori). Or having to explain or spell your tūpuna name all the time (like 53% of the people surveyed).

Other instances of racism are more coordinated and actively reinforced by institutions (like local governments) or industries (like media). The survey asked questions about colonial statues and 63% of Māori were left riri at the use of our shared public spaces to commemorate harmful colonial figures. And most Māori (79%) said that they felt non-Māori media portrayed Māori negatively all of the time or often.

The approach taken by Te Atawhai o Te Ao is to draw together these different types of racism, characterising them as attacks on our rangatiratanga. Here rangatiratanga is used as shorthand for the wellbeing that whānau, hapū and iwi had before colonisation and also captures Māori aspirations and rights guaranteed under Te Tiriti o Waitangi.

The survey questions about traditional kai, in particular, show just how these attacks on rangatiratanga affect us across generations. Being able to gather, prepare and eat the foods of our tūpuna is a way to keep our traditions alive. Sharing this with younger generations is one of the best parts of being Māori. While 76% of Māori said they or their whānau had knowledge about traditional kai, a large proportion of people (32%) felt a deep sense of loss when they couldn’t harvest or buy Māori kai and this only got worse with age.

I should probably at this point make it clear that the illustrations throughout the Whakatika report, and in this article, are mine (commissioned by Te Atawhai o Te Ao). In illustrating such a dark and harmful topic, the challenge was to humanise the content without trying to make everyone look irrationally happy about having our rights eroded systematically. When it came to kai, I looked at the survey data and started to intensely miss the smell of Dad preparing kina and pāua in my childhood kitchen. I understood the 64% of kaumātua who shared their deep sense of grief at not being able to access traditional kai.

The heartening thing you’ll find in Whakatika is the ways that Māori push back against racism. Across all parts of the survey Māori talk about the support of whānau in processing and understanding our experiences of racism (for example 62% of Māori say they talk to their whānau after seeing negative portrayals of Māori in media stories). Māori also create safe spaces for each other, to express our Māori identities, and the survey shows we feel most comfortable with whānau, at home or at iwi events.

There is a lot of ground covered in the Whakatika report, including a challenge for those of us (including government agencies) who think that a bit of unconscious bias training will fix all this up. While there are recent signs that suggest the government, media groups and businesses (here and overseas) are prepared to acknowledge racism or ‘bias’, we have every reason to be sceptical. We know that gains are easily lost from a change in political will (see for example, the race-based policies review following a speech at Orewa in the 2000s). Which is why it is important that these same groups engage with the findings of the Whakatika report and its observations that eliminating racism requires support for mana motuhake, protection (and respect) of our Te Tiriti rights and “a constant, consistent, Māori focused, multipronged approach”.

Whakatika is available here. You’ll find a treasure trove of background material too, including literature reviews by Dr Rawiri Tinirau, DrCherryl Smith, and Meri Haami, and some sweet illustrations.