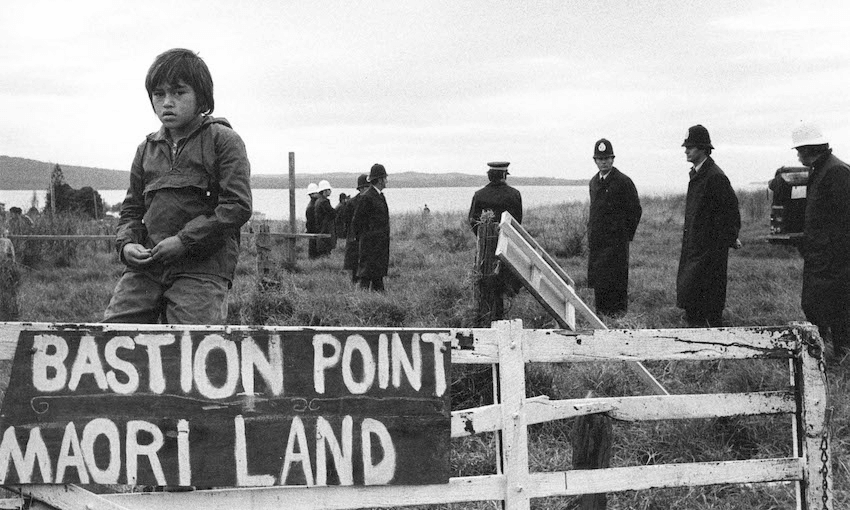 By The Spinoff Ātea
Guest writer

For 506 days, Ngāti Whātua Ōrākei peacefully occupied Takaparawhau (Bastion Point) in Tāmaki Makaurau in protest of the government’s plan to subdivide and sell the iwi land. On May 25, 1978, they were forcibly removed by police and soldiers.

Today manuhiri from across Aotearoa arrived at Ōrākei Marae at Takaparawhau (Bastion Point) to pay their respects to Joe Hawke, the legendary Ngāti Whātua Ōrākei leader who died on Sunday. It was on this day 44 years ago that more than 800 police and soldiers forcefully attempted to end the occupation of Takaparawhau, arresting 222 people.

Hawke had started the occupation nearly two years earlier in protest of government claims the land had been sold to them by the iwi. The government was planning to subdivide and sell the land. The occupation grew into a flourishing community and became a powerful symbol for Māori rangatiratanga and mana motuhake.

On May 25, 1978, police demolished the community, destroying the meeting house, buildings and gardens.

Photojournalist Robin Morrison, who captured the removal of protesters, was shocked by the violence of the government forces. “I certainly got the feeling of the horror, really, that’s the only way I can really put it of seeing those hundreds and hundreds of police descending on that small community. And whatever the rights and wrongs of that protest movement it certainly made me feel very… almost desolate about New Zealand’s future if a government could send in the paramilitary, really, that’s what it was, into that Māori marae.”

In 1987, Hawke took the iwi’s claim to the Waitangi Tribunal, which ruled the land should be returned to Ngāti Whātua Ōrakei. The government accepted the decision and returned the land, paying the hapū $3 million in reparations.