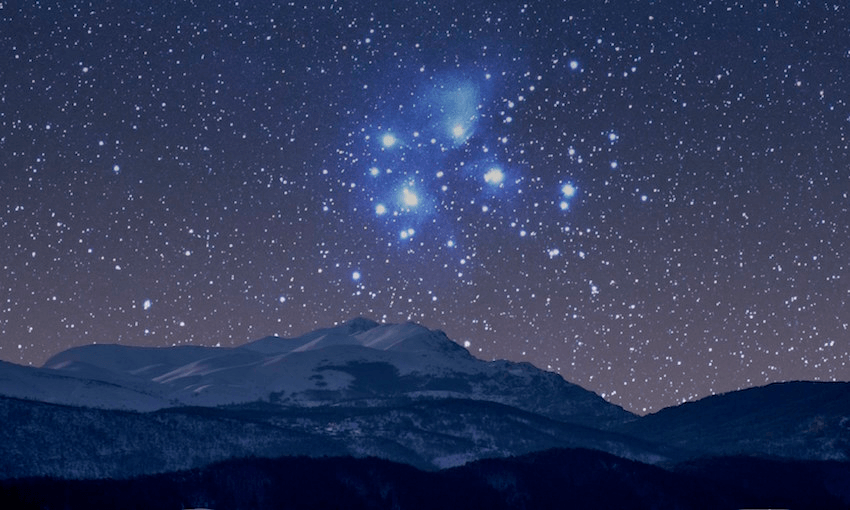 Welcome to the Cheat Sheet, a clickable, shareable, bite-sized FAQ on the news of the moment. Today, we look at the meaning of Matariki.

Matariki is the Māori name for the Pleaides star cluster. It rises during mid-winter and marks the beginning of the Māori new year. The word is an abbreviation of Ngā Mata o te Ariki (Eyes of God) in reference to Tāwhirimātea, god of the wind and weather. In the story of creation, Tāne Mahuta (god of the forest) separated his parents Ranginui and Papatūānuku, and his brother Tāwhirimātea got upset and tore out his eyes, crushed them into pieces and thew them into the sky (umm, ouch).

How many stars are there again?

Matariki has long been thought of as a seven-star cluster, and is often referred to as the Seven Sisters. In recent years Māori astronomer Dr Rangi Mātāmua (Tūhoe), carrying on the work of his grandfather, astronomer Te Kōkau Himiona Te Pikikōtuku, has shared the mātauranga that two of the stars were forgotten over time – Pōhutukawa and Hiwaiterangi – and there are actually nine.

The whetū indicate the success of the season ahead; clear bright stars are a good omen and hazy stars predict a cold, harsh winter. If one star is brighter than another, there will be lots of yummy kai from the source it represents. If one is more dim, or completely missing, you can say haere rā to that kai source for the year, there won’t be much of it.

Does everyone celebrate Matariki?

Some iwi look to Puanga/Puaka, known as Rigel in Orion, as the New Year star. It rises earlier than Matariki and in some parts of the country its brightness makes it clearer to see during twilight.

So when can we see all these stars?

Puanga is currently visible in the west, just after sunset. According to the maramataka, this year Matariki will be most visible between 6-13 July 2018.

Hold up, what is the maramataka?

Maramataka is the Māori lunar calendar. Many indigenous cultures around the world have their own version of the maramataka which aligns with the phases of the moon, rather than the common Gregorian calendar. The maramataka Māori is made up of twelve, 29.5 day months and, a 354-day year. We’re currently in the coldest period of the maramataka and some clever tūpuna named the months accordingly. Piripi (June) means huddled close together and Hōngoingoi (July) is being inactive and crouching, due to the cold.

The maramataka also tells us the best days for planting and fishing and it tells us the high and low energy days that affect people’s moods. So don’t be too harsh on workmates that are making you hōhā, it might just be the wrong day on the maramataka.

So do we have a count down and fireworks to celebrate the New Year?

Umm, no. Matariki is a time of remembrance, paying respect to those who have passed on and a time for new beginnings to plan for the year ahead. Matariki festivals and celebrations happen throughout the country during June and July. Check your local council, school or marae for events taking place in your area.

This year, Auckland  and Wellington have month-long programmes of theatre, film, visual arts, food, performance, environmental activations and community events, plus there’s heaps going on in the community. If you want to celebrate Matariki as a whānau you could visit the graves of loved ones, come together for a kai and karakia, or walk up your local maunga to view the stars.

In this fascinating podcast from University of Waikato associate professor Dr Rangi Matamua, in which he shares a Māori perspective on astronomical and cosmological links relevant to Matariki.