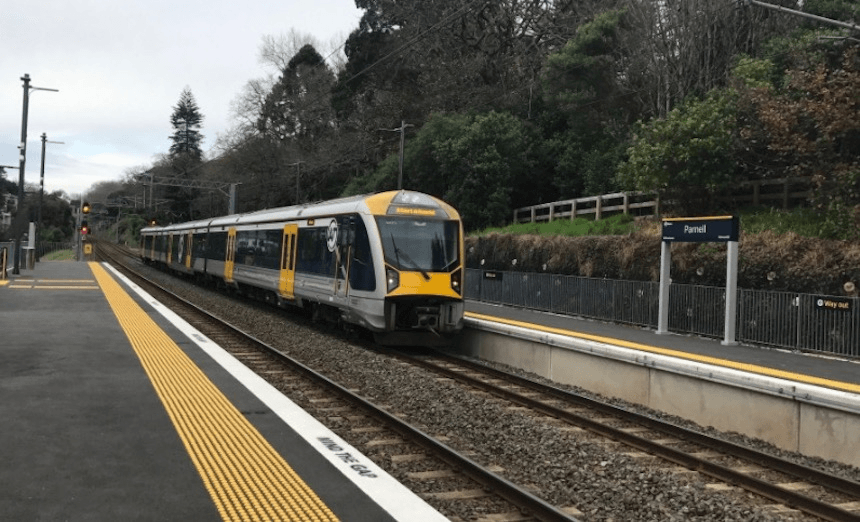 Remember the Parnell railway station fiasco? There’s another side to the story, writes Simon Wilson.

They were wrong on almost every count. The Parnell railway station is really hard to get to and most of the trains going past don’t even stop there! Recently we published a sharp critique of the station from Greater Auckland’s Harriet Gale.

And yet some people believe Parnell station is a great and good thing. So this week I went and walked all over the site with Pippa Coom, chair of the Waitemata Local Board. Although it’s an Auckland Transport project, her board has a lot to do with it because it pays for access walkways and some other related infrastructure. So how do the criticisms stack up?

Why is the station hidden in a valley?

From the east side, the Parnell Rise side, there is just one pedestrian access route to the station. On the west side there is also just one access route: the old walking track down from the Domain that used to be called the Ho Chi Minh Trail.

Although there’s a big new student accommodation and commercial complex on what used to be Carlaw Park, right next to the station, it has no access. If you want to catch a train from there you have to walk out and around, all the way up Parnell Rise and then down a side street.

The station is about as far from the University of Auckland as it would be possible to put it, and from that entire industrial and large-scale commercial area around Stanley St and the Strand too.

It’s in an open, barren, super-ugly stretch of land in a valley that’s hard to get to, and involves a stiff walk when you get off the train and want to get out. Why?

There are two competing points of view about the suitability of the location. One says it’s unnecessarily far from the major worker and student catchments. The other says it’s as close to the shops of Parnell Rd, and to the houses and apartment blocks that surround Parnell Rd, as it can be. Really, it’s a question of which catchment is more important. The Parnell Business Association likes the location and envisages big things.

While there’s only one access point on that east (Parnell Rd) side right now, there will be two. There will also be, in time, a greenway for walking and cycling that runs alongside the rail line all the way from Newmarket. The rail line runs through a tunnel to the south of the station; next to that tunnel is an older one, currently sealed up, which will be reopened for the greenway.

On the west side, there will be a walkway directly connecting the station with the new complex at Carlaw Park. It just hasn’t been built yet. It will link to an underpass (or possibly an overbridge) at the north end of the station, so you can catch trains going either way. It should open quite soon.

The reason the station opened before such obviously needed facilities were built is that there was a window in the funding and construction programme that allowed for the essential rail and station work to be done. It’s been opened before it’s fully ready, because it could be.

The station is on a barren stretch of land, but the site is empty because it’s destined to become a very large retirement village. The station will become a major asset for the residents of that village.

So, in summary, is the location bad? It’s further from the Stanley St/Strand workforce than it could have been, which is unfortunate. The rail network is supposed to become a key element in reducing congestion on the roads, so why were the needs of commuters not prioritised in the decision of where to site the station? Why prioritise shoppers and residents up on the hill in Parnell, when they are already well served by public transport in the form of the Link bus and other buses?

It’s silly that if you’re coming from east of the rail overbridge across Stanley St you have to walk all the way up Parnell Rise and then down. But the new access from Carlaw Park, with a new underpass, will certainly benefit all the people on that western side of the tracks.

The old Newmarket station was relocated to this site and the plan is to lease out parts of it as a café and for other commercial operations. That sounds like it’ll improve the area. But even if it doesn’t happen, the restoration of heritage buildings in this city happens far too rarely and it’ll be good to have this one back in action.

The criticism of “disneyfication” – the term refers to amenities that look pretty but serve little purpose – would be valid if the station was unused. It would mean failure was “disguised” by the attractive building. But this station won’t fail. When it’s better connected, as planned, and has far more people living in its catchment, also as planned, it will get a lot busier.

Why is the station so hard to find?

Why indeed. There is only one small sign at the start of a side street on Parnell Rd directing you to the station, even though half a dozen side streets connect up and lead to that single entrance. It’s ridiculously badly signposted from Parnell Rd.

At Carlaw Park there’s a path up into the Domain, which can be used to connect to the former Ho Chi Minh Trail and from there to the station. It’s not direct but it’s there. It’s not signposted.

It’s like the signs have been done by people who don’t have any idea what signs are for.

Will the site ever be attractive?

Yes it will. The bush of the domain makes an attractive backdrop on the west side already. The Carlaw Park buildings were designed specifically so as not to show a bleak rear facade to the railway line. And there’s a stream that comes down from a spring in the Domain and has been kept open, rather than culverted. The local community has planted its banks extensively.

The former Ho Chi Minh Trail up to Parnell Rd will be restored and when the retirement village is built, the wasteland aspect of the rest will disappear.

There are plans to offer concessions in the station building (a café, other retail) and that will help too.

Why don’t all the trains stop there?

This is still the most irritating thing of all. Trains on the Southern, Western and Onehunga lines all go through the station but only the Southern line trains always stop there. The Western line trains stop on the weekends and in the evenings (if you work in the area you can’t catch a train directly to work but you can catch one home). The Onehunga trains don’t stop there at all. This leads to the absurd situation of people having to change trains at Newmarket to get to a station their original train goes through anyway.

The reason the trains don’t stop seems to be that Auckland Transport is obsessed with travel time. Adding a stop adds another couple of minutes to your trip. Does anyone care? Not actual train users, as opposed to planners who don’t use the train, I bet.

Besides, the stops don’t need to take a couple of minutes. As actual users of the trains know well, Auckland trains routinely wait at each station far longer than they need to.

It’s not just a commuter issue, as it also affects the potential of Parnell shopping and Domain use. An open, well-signposted, accessible walkway/cycleway from the station to the Domain should appeal to museum patrons, picnickers, sportspeople and other visitors.

There’s one more thing to mention about the Parnell station: it’s not there because Cr Mike Lee decided to put it there. As chair of the old Auckland Regional Council, board member of Auckland Transport (a position he no longer holds) and as a city councillor now he has always been a strong advocate for the station. But the decision was not his to make. Good and bad, the responsibility for the station lies with the AT management and the AT board.

Parnell railway station will soon become far more functional. It will never serve the nearby workforce as well as it should, because it’s been sited further away from them than it could have been. That’s really unfortunate. But by the time that retirement village is built it will be busy, and the surroundings should become attractive.

When the lightning bolts of reason strike Auckland Transport and it schedules all the trains to stop there, it will be a genuine going concern.