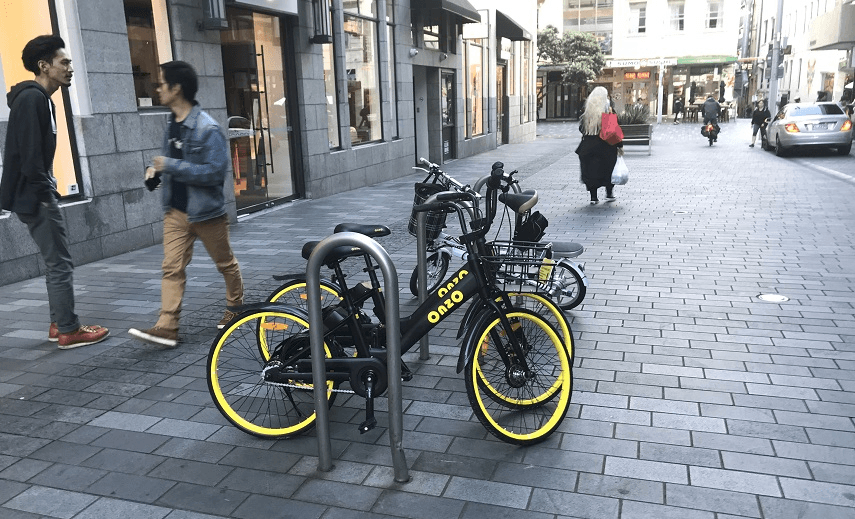 What are all those black and yellow bikes doing on Auckland’s bike racks?

Auckland has a new bike share scheme! Or does it? Simon Wilson investigates the strange case of the bumblebee bikes in the central city.

Seen the brand new OnzO bikes all over central Auckland? Two by two, like animals from the Ark, gleaming black with shock-yellow wheel rims, they’ve turned up suddenly at almost every public bike stand. What’s the deal?

It’s a new privately run bike-hire scheme. Kathryn King, the cycling supremo at Auckland Transport, says the bikes appeared on Sunday and the company got in touch with AT on Monday. No prior contact at all. “Similar companies have set up in the same manner all over the world,” says King. “Set up and then ask permission.” On Facebook, OnzO says the scheme is a “trial” until the end of November.

OnzO is a trading name for Pacific on Wheels Ltd, a registered company based in Te Atatu, with a sole director, Xinyu Hu.

You use the OnzO bikes by downloading an app and signing up. The app is free but to join the scheme you pay a $9.99 fee, which is then returned to you as a $10 credit. Bike hire cost 25 cents per 15 minutes or part thereof, and they can be picked up and returned at any of the designated stands. A helmet is provided and there’s a handy carrier basket too. Signing up requires you to provide the company with your name, phone, email and credit card details.

Last night, in addition to the central city and Wynyard Quarter, the app showed bikes in locations in a ring around the isthmus: Mission Bay, Orakei, Onehunga, Three Kings, Mt Roskill and Avondale; and also in upper Dominion Rd, Richmond Rd, Victoria Park and somewhere in the sea near Stanley Pt in Devonport.

A Singaporean company operates a similar scheme in many other cities, including London, Sydney and Melbourne, under the similar-sounding name Obikes, with similar-looking bikes: black with yellow wheels.

Is this a good thing?

Auckland needs a decent bike-share scheme and this one is easy to use. The rental is cheap, and with very few people using them on day one, the bikes downtown were plentiful. If you wanted a cheap fun way to get from Queen St to Wynyard Quarter, say, they might be just the ticket.

But there’s more to it than that.

First up, OnzO is supposed to have a trading licence to operate a business on the city streets. King says AT will be meeting with the company on Friday and will make that clear, as well as setting out its expectations for a code of practice covering parking, maintenance, not blocking the footpaths and so on.

But she’s not opposed to the scheme. “It’s a great option for people to try cycling,” she says. King adds that AT will be watching to see how many bikes might be required, whether e-bikes are needed and to see what else can be learned.

She’s not worried about the bikes taking up space at the public racks. “As a city we’ll need to step up our bike parking provision either way. That’s on our programme for this year.”

Actually, a bike-share scheme, probably including e-bikes, is also on the plans: AT is unlikely to run such a thing itself, but it’s investigating the options now and a contract might soon be on offer.

Not everyone is happy with OnzO. Allowing the scheme to use public racks has drawn complaints on social media. “It’s the privatisation of a public asset,” said one critic. But although the OnzO bikes are parked by the public racks, they are not locked to them. They’re “self-docking”, which means the lock secures the back wheel, so you can’t ride away without activating your membership, but you can just move them out of your way if you want to park your own bike at the rack.

You can also carry the OnzO bikes away, which will almost certainly become a problem for the company and maybe for the city too, once they start appearing in trees in the Domain. That’s what’s happened in Melbourne lately, where the same MO of sudden unannounced arrival has seen Obikes labelled a “shadowy” business by the city.

So how good are they to ride? The bikes have a step-through design and are therefore easy for almost anyone to get onto. The seat is wide, but the seat post has minimal height adjustment and may not suit anyone over, say, 180cm (5ft 9in). The tyres are solid and there’s only one gear: pretty tough if you want to get from lower Queen St to K Rd, or almost anywhere except along the waterfront.

Those things are disappointing: a bike-share scheme in Auckland will never work if the bikes are not fit for purpose – with enough size flexibility for local riders and with gearing for the hilly conditions.

Another problem: the app says nothing about what will be done with your personal details.

Perhaps the most peculiar thing of all, OnzO has begun with very little publicity. A little bit of social media, no apparent attempt to get news coverage, no known promotional gimmicks, no other visible marketing or normal advertising. The company has the barest information on Facebook, along with a short video with a strong environmental message.

It’s good that someone thinks a bike-share scheme could work in Auckland. It’s understandable they chose the route of apology rather than seeking permission, in order to start. Probably bought themselves a few months extra trading there.

But it’s disappointing the bikes are not fit for purpose and that the company is not reassuring about data protection. Auckland deserves a decent bike-share scheme, but it’s debatable whether trialling a poor one will get us much closer to that goal. Still, if tootling around on the flat is your thing, OnzO bikes are cheap and ready to ride.

But it is odd the company has not yet demonstrated a desire to make the scheme popular. Who’s going to bother if they don’t?